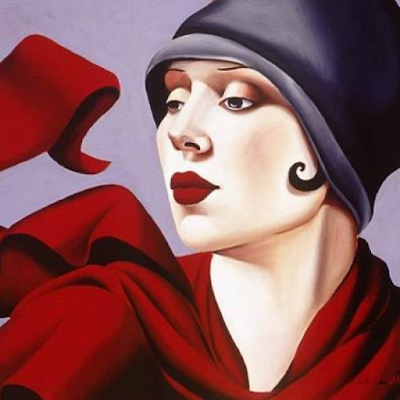 Robust rumors are circulating that “Lempicka A New Musical” is already scheduled for a Broadway run. With book, lyrics and original concept by Carson Kreitzer, book and music by Matt Gould choreography by Raja Feather Kelly and directed by Rachel Chavkin, it is currently at the La Jolla Playhouse through July 24th making its West Coast Premiere.

It made its world premiere in the Williamstown Theatre Festival in 2018.  While stopping here for its second showing, after a Covid delay, it is hoped with some cuts and possible improvements to the lyrics, before going to The Great White Way it will improve the outcome.

Tamara de Lempicka’s story begins and ends in L.A.  and segues back to her early life in Warsaw at the beginning of the rise of Bolshevism, to her first marriage in 1917 in St Petersburg to a wealthy Polish lawyer. Tadeusz Lempicki. They lived like royalty until their world was turned upside down. Her husband was arrested by the secret police. Giving her jewelry to them was not enough to free him. They wanted her.

Once free they left with their daughter, Kizette whom she called her niece so she wouldn’t be considered old enough to have a daughter, to Paris. There she scrubbed floors to keep the family going while Tadeusz looked and looked finally landing a job at the bank doing menial work. It was in Paris that she pursued her painting on a serious level studying with a hard assed domineering teacher, Filippo Marinetti who called her a ‘difficult woman’.

Before she made her way to her own studio, she was encouraged by wealthy Baron, who later became her second husband, (Victor C. Chan) to keep on painting. From there, at the suggestion of her sister and with help from the Baron, Lempicka decided to become a serious painter. She went on to Académie de la Grande Chaumiere. Now she was fully engaged with Marinetti (George Abud is excellent and almost steals the show with his brilliant singing and acting) as her teacher, the same one who called her ‘that difficult woman’.

Nothing much has changed since most hard -nosed men can’t tolerate strong women. Make no mistake, Tamara Lempicka was a very strong willed woman and that’s what makes her so interesting. That and the fact that she found women as seductive as men and openly had affairs with both. Her relationship with her prostitute muse Rafaella, who frequently posed nude for Lempicka, while they carried on their affair was nothing less than blasphemous to her husband, who was also having affairs outside the marriage. Go figure.

Not long after she gained notoriety for her works in Art Deco forms, the rich and famous Parisians were buying her works for hefty prices.  Once again, her world was turned upside down with the rise of anti-Semitism (she never forgot her Jewish roots) and a Nazi takeover. It was at this point in her life and career that she had to make haste and flee to America where we learn she had residences in both New York and Beverly Hills.

One can’t accuse Tamara de Lempicka of having a dull life. While some of her story might be exaggerated, the production at The La Jolla Playhouse leaves no stone unturned from Riccardo Hernandez fast revolving sets offset by Bradley King’s fluorescent angular lighting, to Anita Yavich’s stunning and bold costume designs (with the exception of Eden Espinosa’s Lempicka who pretty much wore the same costume and hair style (Tom Watson) from almost beginning to end.

Choreographer Raja Feather Kelly showed us some pretty different types of dance, oft times sexual in nature but for the most part seemed like an exercise in movement. However, Peter Negrini’s projections brought us back to reality with scenes from Germany’s rising influence.

Matt Gould’s score under the baton of Charity Wicks ten piece orchestra is loud, frenetic and with a fast moving beat with no real ballads that make a connection to the time, was disappointing. Carson Kreitzer lyrics are pedestrian, redundant and don’t really add much to the overall story. They are never developed into anything that holds the story together.

One or two bluesy numbers sung by Rafaela an extremely talented and beautiful Amber Iman and another of Lempicka’s female amours Suzy Solidor (Natalie Joy Johnson) who owned the all-female club, until it was destroyed by the Fascists, were out right on track.

The acting is exemplary by each and every character in the show with Espinosa at the center of this very long production running at three hours, is talented. Amber Iman's Rafaela is fascinating as she seems to be the only one in Lempicka’s world to have power over her (“Stillness”), at least at times. Andrew Samonsky’s Tadeusz Lempicki her husband, has no character development. For the fact that his good looks can carry him for a while, he’s mostly just there.

For her part, Jordan Tyson as Kizette, Tempicka’s daughter is allowed to age beautifully on stage from a young child to a devoted daughter and tell all (to her father) to a dedicated daughter to her mother after her return to Beverly Hills.

Director Rachel Chavkin is to be applauded for pulling this stunning musical and story off to the degree that Broadway audiences will find it as timely a musical for the ages as did the audiences in La Jolla. With a tweak here and a tweak there, it's a go!