“Into The Breeches” More Than A WWII Backstage Comedy.

George Brant’s 2018 comedy, set in 1942, now showing at The North Coast Repertory Theatre in Solana Beach, is as much a backstage comedy as it is a lesson on how far we as a society have or have  not come on accepting changing social issues as the country changes. 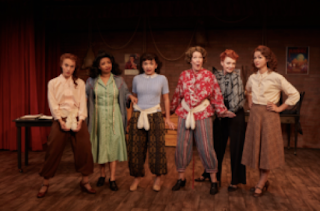 But as an audience member looking in on the comings and goings of a group of female players taking it upon themselves to keep their favorite theatre in Providence, Rhode Island open during war time, when most of the men were off at war it's another story. Things get off to a rocky start when the, long on tooth ingénue, Celeste Fielding, (Katie MacNichol) comes to theatre and finds her fellow competitor Maggie in charge. To say that Celeste trusts Maggie as far as she could throw her would be an understatement, but the show goes on in spite of the potential pitfalls, like board president Ellsworth Snow (James Newcomb). 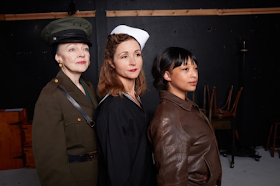 The plays scheduled for this particular season are mostly roles for men… Shakespeare’s Kings Henry IV and V combined. That could prove a potential pitfall for the all-volunteer women ensemble. So, says Ellsworth Snow. More on him later.

For the last 26 years The Oberon Theatre in Providence R.I. has been putting on plays by Shakespeare entertaining their neighbors in Woonsocket and Pawtucket. But… this year most of the men are overseas fighting a war. Maggie Dalton’s (Melanie Lora) husband Andrew always directed. This year, he sends Maggie to R.I.., blessings and all to direct in his place.

Rejected to fight in this war, Stewart Lasker (Geno Carr) the stage manager is classified as Swish (Look it up). Alongside Stewart is African American Ida Green (Taylor Henderson) the company’s costume designer, who is not allowed to act or give blood, because of the color of her skin. (true). That reduces a potential cast of over thirty parts to about five playing as many parts as costumes allow (Renetta Lloyd and Roz Lehman). All who come to audition are women, lest we forget. 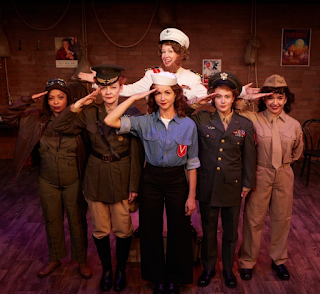 In case you hadn’t guessed, the women take on the men’s roles, ergo, the breeches. And just as a tease… in one of the funniest scenes in the show, they learn to walk like men. At Celeste’s suggestion, Ida brings out enough bean bags attached to a harness of sorts for each of the women to wear, to simulate (Ahem the men’s business) so the women can feel what it’s like to walk like a man. It’s silly little scenes like these that get a good laugh from the audience, and there are many like that.

Take for example Ellsworth Snow (James Newcomb) president of the Theatre Board, who refuses to pay the women for playing the men’s roles. (Yes, the men got paid but the women did not. (What say you to that ladies?) Ellsworth’s wife Winifred (the perfect pitch comic Shana Wride) convinces him to put up the cash as she persuades him to give in to every other want the group needs. Oddly matched, the two are the perfect foils for all that takes place on stage and off stage. (Set by Marty Burnett)

Both Mikaela Macias and Rosemarie Chandler as June Bennett and Grace Richards come to audition and seem to have some basic knowledge of Shakespeare so they are hired on a dime. Both have husbands serving overseas. By the time the show is ready and everyone in places and “Lights up” - Curtain Time, all is well. 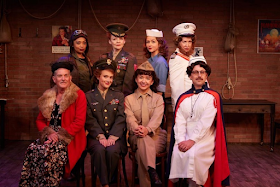 Under the deft direction of Diana Van Fossen and of course with playwright Brant fairly new play,  a new world of first’s plays out in front of us. How naïve we all were about gender equality. Even today women make less for doing the same job as men. If we aren’t aware of this fact today, we’ve been hiding under a rock.  But I would be remiss if I didn’t tell you that the race issue was brought home to me in my own neighborhood before I was a teen, and anti-Semitism, the same.

While “Into The Breeches” started a bit slow and could have been cut a bit, it brought home more than a behind the scenes comedy; it hit home in places we thought we had overcome. On the other hand, it is a tribute to all those involved in theatre, paying homage to everyone who ever stood in front of an audience and gave it their all, as do those in the cast of “Into The Breeches:.

We still have a lot more work to do.