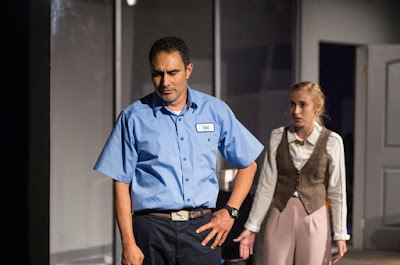 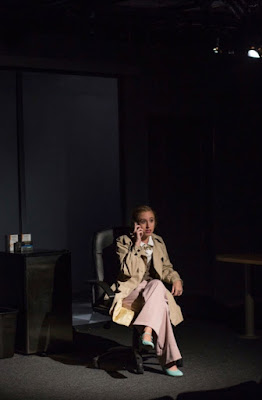 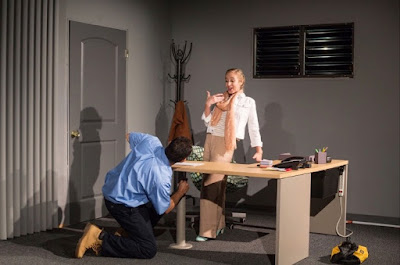 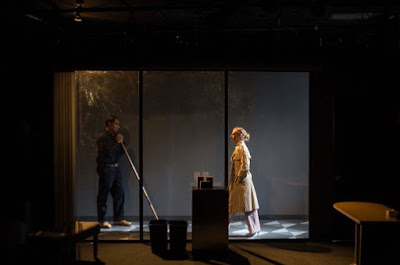 If Jeffrey Hatcher’s “Holmes & Watson” wasn’t so damn clever it would be just  another ho hum mystery. Now on stage at the North Coast Repertory Theatre through Nov. 18th, Hatcher’s mystery is a head scratcher from  start to finish and clever to boot.

The program lists three separate characters as Holmes 1 (Jacob Sidney), Holmes 2 (Drew Parker) and Holmes 3 Christopher M. Williams) and now in a turn about is fair play it’s Watson’s turn to solve the mystery of ‘will the real Holmes please stand up’!


In the world of fiction Sherlock Holmes was the lead detective in all of Conan Doyle stories and Watson was his best friend and number one foil, sort of like Perry Mason and Paul Drake. Now it's Watson's turn to shine.

In Hatcher’s “Holmes & Watson”, now in a West Coast premiere, and three years after Homes’ unthinkable death, Watson (Richard Baird) is called upon to solve the mystery of the true identity once again of Holmes, whose body was never found.

When the play opens on Marty Burnet’s Gothic looking walled in castle/asylum of sorts, on an isolated island where getting in and out is no ease fete Watson is greeted by Dr. Evans (Si Osborne). Evans appears as strange as his surroundings and as the play progresses, stranger things than Evans dealings come to the fore.

The good doctor and his, ahem nurse, (Alice Sherman -Jane of all trades) and his never smiling orderly (J. Todd Adams) claims to be in charge of three motley looking blokes brought to Watson for further questioning since who better to identify Holmes than someone as close to him as his side kick Watson? All three listed above in some fashion are being held prisoners and are in varying degrees of disarray.

Since Holmes’ drowning when he ‘fell’ or was pushed over the Reichenbach Falls in Switzerland, in a scene that is reenacted through projections several times over the course of the 85+ minutes we get to see the ‘how’ of ‘what that seemed to have happened.

To no one’s surprise, no body was ever found and it was natural for frauds and charlatans to impersonate the detective.  Out of the void, and after several years and attempts to flush out the real Holmes to no avail, these three criminal looking types on the island all claim to be the famous detective. Hmmmmmm.

With red herrings bouncing off the dark stone  walls of the castle and a story cycle enough to confuse anyone claiming to be a super sleuth, Hatcher’s story, under the deft direction of artistic director David Ellenstein who seems to relish in this type fun, makes “Holmes & Watson” a pleasant and aha gift to NCR’s patrons.

As usual North Coast has a top notch and diversified cast and crew, to pull off this mystery caper with the help of Peter Herman’s wigs, or lack thereof, Kim Deshazo’s costumes, Chad Lee Thymes’ accurate sound design, and Matt Novotny’s spot on lighting. Photographer Aaron Rumley is credited for the projections, an integral part of the overall mystery.

All the actors with the exception of Baird’s Watson play multiple roles. As to be expected Richard Baird is the consummate professional. As Watson he’s convincing in his interrogations and in finding fault with each imposter, clever little geyser that he is.
Let’s be honest here, this is the stuff Baird thrives on and he does it to perfection. He does manage to be a part of a few hits and misses. But at the end of the day his gestures and mannerisms are always spot on perfect. I must say he is also most convincing when he and Osborne’s Dr. Evan’s go at it.  The dynamics are perfect and the wit subtle.

The remaining cast members are equally convincing, all leading us down the primrose path to a most surprise ending. BTW even if you manage to figure it out, which might take your concentration off the show, relax and enjoy the journey.

It’s not just elementary my dear, its pure and simple fun headed in to the holiday season.