The latest of the filmed for streaming play “Trying” by Joanna McClelland Glass, in this semi biographical turn, is a little gem in disguise. It stars James Sutorius as famed Attorney General and Chief Judge at Nuremberg, Francis Biddle and Emily Goss is Sarah Schorr, Joanna McClelland Glass’ alter ego. It’s no secret that Sutorius is one hell of an actor having won the San Diego Theatre Critics Award for his title role in NCR’S “The Father”, another sleeper.  He is wonderful as Judge Bigddle. (more on that later) “Trying” will be remembered as a history lesson for the times and beyond.

When Sarah first met Judge Francis Biddle in 1967 she was in her early twenties and he was 81. He had pretty much ‘done it all.’ She was from the Canadian prairie, her native Saskatoon, Saskatchewan.  His ancestry dated back to 1681, England and was “Main Line Philadelphia”, a Blueblood, if you will. Her father was a salesman, who lost everything when he was fired from his job and eventually drank himself to death. Her mother was illiterate.

He could trace his lineage, on his mother’s side, to influential aristocrat Thomas Randolph, a diplomatic agent reporting to Queen Elizabeth and a younger Thomas Randolph, successful writer of English and Latin. 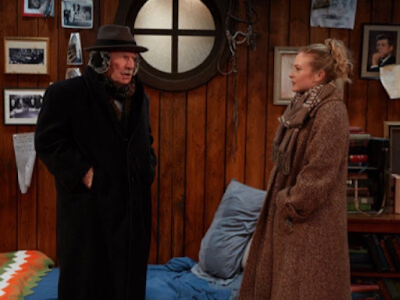 Getting his memoirs, books and personal papers in order became a monumental task after his retirement as chairman of the Americans for Democratic Action and president of the American Civil Liberties Union. His things were in disarray. His office was a mess. His checkbook out of whack and his life was headed toward the ‘blinking EXIT signs’. Papers were stacked on opposite desks in his makeshift office (read barn) across the courtyard from his house and he had gone through enough ‘Gal Friday’s’ to intimidate another from applying for the job…Enter Sarah Schorr.

In Joanna McClelland Glass’ heartwarming play, “Trying”, about the final year in Judge Francis Biddle’s life is now in a solid production under the deft direction of artistic director David Ellenstein at North Coast Rep.  The word ‘trying’ takes on many meanings. It is a trying time for both the Judge and his novice secretary.

Both ‘try’ to bridge the age gap and understand the other’s needs, although Biddle complains bitterly about not having enough time or energy to get involved in Sarah’s personal life. In fact, he becomes somewhat of a surrogate father by plays end and knows more about her than he lets on.   Biddle tries to hang on until the work is complete while Sarah tries not to let the crotchety and kvetchy judge dislodge her from her position. 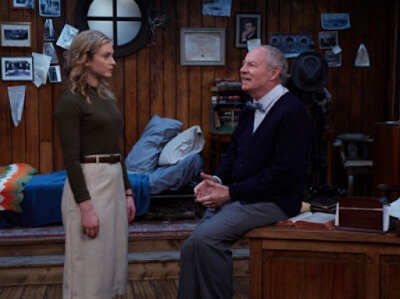 As Biddle, the expressions of pain when his arthritis kicked in; the repetitive directions he had forgotten he gave to Sarah about not turning the floor heaters on; about the fiasco of his last secretary; about his impending death; about his insistence on using proper English; about his education, his love of poetry and about losing a son at the age of seven are real. All the little glimpses of a man who knew of his greatness and was ready to face his mortality are seen in another great turn for Sutorius, who might not be an octogenarian yet, but comes a close to the real thing, as I can attest. Repetitive, just ask my kids.

As Sarah, Ms. Goss who received her B.A in Theater from the University of Southern California and M.A. in Classical Acting from the London Academy of Music and Dramatic Art, her talents shined through withflying colors. She is a perfect foil for the crusty, yet soft Biddle. She is feisty, understanding and goes nose to nose in great harmony with Biddle. Theirs is truly a friendship at plays end. 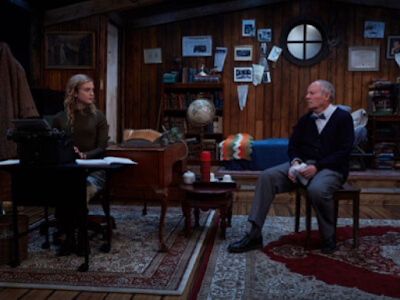 Marty Burnett’s busy set, set the tone with all the little Knick knack’s and prop design by Phillip Korth, Elisa Benzoni costumes are period right. A huge hat’s off to Aaron Rumley (cinematographer/ Editor/ stage manager) for the near perfect theatrical experience through the media of streaming.

For a history lesson in the making and an up to date look back at history repeating itself, this is a perfect choice for the times.

MOXIE’S “I AND YOU” PUSH ME PULL YOU DYNAMICS MAKES FOR EXCELLENT THEATRE!

It’s been some time now since teenagers lived in my house. I might be a little fuzzy on the dynamics between them even now.  So, when Anthony (Miles Henry) comes bursting into Caroline’s (Justine Sombilon) bedroom; backpack, waffle fries, Pop Tarts and a poster of Walt Whitman in hand, and quoting from his “Song of Myself”, the shackles on Caroline’s back stand at attention. Who? What? And Why? Is he there?

According to Anthony, he volunteered them be working on an English project together. (It’s due the next day). Problem is that she has not been in school for over six weeks because of a liver disease, (she’s waiting for a transplant donor) and furthermore she hates school, the disease that’s keeping her home, and equally, poetry. “My body hates me, my house hates me, and here you come with homework?
She can think of a dozen ways to divert attention, start an argument or just plain ignore rather him than fall for his plan. She’s confrontational, combative and surly. He hovers over her in height: tall, handsome basketball player who is driven to do the right thing, like doing homework. He’s awkward around girls because ‘they get weird’ and she thinks boys ‘only pretend to be tough when they are scared’. After a day of dancing a slight war dance, he turns her on to his favorite poet Walt Whitman.
“I and You”, streaming now through March, 28th brings together two top notch actors very familiar with each other (they have been friends and/or co-acting together for about eleven years), and takes off like a lightning rod as the two spar over the meanings of life, death, poetry, Walt Whitman and the use of pronouns in Whitman’s “Leaves of Grass”, where you will become very much WE.

Perfect timing in a world turned topsy-turvy by a year of separation and loneliness, lack of human contact and connection and teen angst, “I and You” brings out the wonder and discovery of experiences through art.  Under associate director Callie Prendiville’s deft direction both actors slowly switch from cautious sharing of music (she loves Elvis- Great Balls of Fire, he John Coltrane) to sharing Anthony’s waffle fries to well if you can believe it, a hug and cooperation on the project to the finished product. The 90 minute play has more to offer than meets the eye, but no spoilers here.
Reiko Huffman designed the bedroom scenery, Carmen Amon designed costumes, Ashley Bietz designed lighting and Mason Pilevsky designed sound. It was filmed and edited by John Brooks. Photo: Moxie Theatre.

MOXIE Theatre www.moxietheatre.com
Electric Company Theatre www.electriccompanytheatre.org
A virtual production of I And You by Lauren Gunderson
filmed on MOXIE Theatre’s stage and streamed digitally to audiences.

Tickets: $35- Buy One Give One (sponsor a student with your purchase) $25- Single Ticket. $15- Rush Tickets - 1 Hour Before Performance - Limited Availability.
Perfect theatre piece for the now times. I give it two thumbs up!

Posted by Carol Davis at 9:56 PM No comments: