For those not in the know (yours truly among them), Investopedia describes dry powder as “a slang term referring to marketable securities that are highly liquid and considered cash-like. Dry powder can also refer to cash reserves kept on hand by a company, venture capital firm or individual to cover future obligations, purchase assets or make acquisitions.” Who knew? 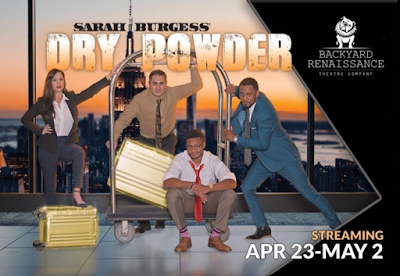 Backyard Renaissance Theatre Company is presenting Sara Burgess’s 2016 comedy /drama behind the scenes world of high finance; the bargaining, the lies, the deal and the kill in a highly emotional and charged production as directed by Francis Gercke that pits just about every player against his or her self.

It’s a fast moving 80 plus minute of wheeling and dealing about finances, company layoffs, workers protesting about the layoff’s, investors overseas manufacturing and who in the company has the best plan for the most return on the dollar, er millions of dollars.

CEO of KMM Capital Management Rick (Javier Guerrero) is trying to recover from the company’s fiasco of laying off many of the grocery workers from a company KMM recently acquired especially after he just threw an expensive party celebrating his upcoming marriage. The optics were not good. 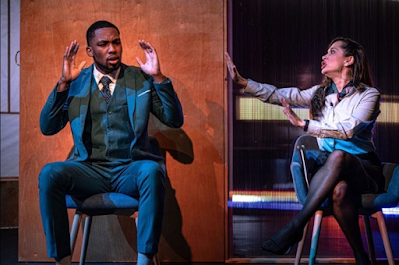 Enter Seth (Carter Piggee) another partner who, wanting to change the dynamic, suggests the company buy Landmark Luggage, a company founded in America and made in America and using American workers. He has an inside track to the CEO of the company.

The rub in that scheme is another co-founder Jenny (Jessica John), a wiz at crunching numbers that can make your head spin who has other plans for Landmark Luggage. And so, the beat goes on with wrangling from all sides on how best to seal the deal. The one unknown is Jeff (James Hancock III) CEO of Landmark Luggage who also happens to be buddies with Seth. He’s ready to deal, but too many red flags keep popping up.

The action takes place over a three day period as the balance of power changes from one character to another, all fully committed to The Deal but approaching it from different angles. All think they want the same thing but are miles apart in the way they do business.

Both Jenny and Seth argue numbers. Seth thinks he has the upper hand because he and Jeff have known each other and have built some trust between them. Jenny, who can bowl you over with numbers, vies for Rick’s approval when she delivers the bottom line. Rick seems like he’s in a conundrum most of the time by being pulled in all directions.

Burgess’s play, a fast paced comedy drama, alluded yours truly parts of the time. True confession; I have not balanced my checkbook in over thirty years. Kudos to the four wonderful actors for at least dragging me into the cut throat world of high finances. Or maybe not!

John’s Jenny single purpose of rattling off different scenarios to make the deal work is, to yours truly, mind boggling and she does it with such conviction and confidence and the skill of a high powered control bully. Piggee on the other hand is low keyed, and assured. His is a more controlled and deliberate way of doing business while Hancock’s Jeff, on the receiving end, smells a rat complicated by layoffs and outsourcing and Guerrero’s Rick seems otherwise engaged.

Once again Backyard Renaissance has outdone itself in acting, look and, dare I say, the challenge to step into the world of high finances.

“Dry Powder “will be available for streaming through May 2.

Posted by Carol Davis at 4:02 PM No comments:

“I’VE BEEN TO THE MOUNTAIN TOP”

The 1963 shooting of the Reverend Martin Luther King, Jr., Baptist Minister and civil rights activist, whose passionate 1963 “I Have a Dream” (before 200,000 at the Lincoln Memorial in D.C.) and “I’ve Been to the Mountaintop” sermons put him in the spotlight as #1 shaker of the Civil Rights movement. He was on the rise to becoming one of the greatest outspoken orators of the time.

His ‘Mountaintop’ sermon was delivered at a rally in support of striking sanitation workers in Memphis, Tennessee in 1963. The very next day he was to lead a protest march in sympathy with the striking workers. To say that his life was in danger at all times would be an understatement. “Fear is his companion, his lover”.

In her ninety plus minute play, now streaming through May 26th in collaboration with by American History Theatre and Roustabouts Theatre Company and Teen Youth Performing Arts Theatre Company Repertory Theatre (thanks to the direction of Kandace Crystal), she re-imagines MLK’s last night on this earth in the seedy Lorraine Hotel room # 306 (to be exact) the night before his assassination (April 3, 1968).

In what Hall conjures as a conversation between King (Caiel Noble) and the pretty little chambermaid, Camae (Ashley Graham) sent (supposedly) by the hotel upon his request for room service, the play unfolds somewhat like a TV part sit com/ part come to Jesus.

The play opens as King (Noble) is ushered into the room by his most trusted deputy and best friend Ralph Abernathy, whom he immediately sends out again to get a pack of Pall Malls. Left in the room alone, he deadbolts the door pulls the curtains over the windows, turns on the lamp and starts reciting the beginnings of his next sermon. (“Why America is going to hell…”) He then calls for room service.

When King gets a good look at the young lady holding a tray of coffee, with a newspaper covering her head against the evening’s rain fall, his eyes just about pop out of his head.  Both have no trouble flirting as in “I like what I see’ at a glance. This is her first day on the job, she tells him that while the coffee is on the house, she advances that he can pay her for ‘gettin’ my press ‘n curl wet out in this rain”.

And so, it goes. They jibe and play. He wants cigarettes with his coffee, she scolds because he doesn’t take care of himself. We glance at his frailties, his non-violent marches; does she like him better with or without his moustache?

They debate seriously about the work he has yet to finish.  He is paranoid about his room being bugged and she reminds him that the size of his FBI file is thicker than a bible. His concerns about his role here on earth as a leader and Civil Rights Activist are contrasted against his playful self as a womanizer; a fragile human being who flirts with the chambermaid while speaking to his wife and children on the phone.

Finally, after some bantering about and she refers to him by his childhood name, she admits that she was sent to help him make it through the night. “God said I gotta get you ready to come on home”. And while he begs for more time she has to convince him that someone else will have to pick up the baton.

In one of the more funny yet serious scenes King finally gets to bargain with God about his job here on earth “I’m falling into the ocean of death. How dare you take me now. NOW! I beg of You. I plead-God, how dare you?”

For those in the know, history left its mark for all to see as the television cameras rolled outside on the balcony of room 306 at 6:01 PM, April 4th 1968.Yours truly will never forget those moments.

His legacy as a man and Civil Rights leader, as examined by Hall in this particular telling is somewhat choppy and repetitive . It doesn’t always convince. His life is worthy of a more serious and complex examination.

That said, between 1963 the the election of Obama to the present some progress has been made. With the spotlight now on BLM, hopefully many more changes will follow.

Both Noble and Graham play beautifully off one another. Noble is natural and easy; not trying to impersonate King or look larger than life. He was after all flesh and blood with many shortcomings.   Graham is playful funny and delightful, cautious and with a purpose.  The chemistry flows from one to another and the some banter comes with underlying truths and some just plain frivolous.

“The Mountaintop”is streaming through May 16th.

For more information go to www.themountaintopsd.com

Posted by Carol Davis at 3:04 PM No comments:

MY BROOKLYN HAMLET: A MODERN DAY TRAGEDY TOLD THROUGH A DAUGHTER’S EYE.

“My Brooklyn Hamlet: A Meshugenah True Story” of Love, Murder, Betrayal, and Forgiveness written and performed by solo artist Brenda Adelman is currently being streamed as a co-production of Scripps Ranch Theatre and Oceanside Theatre Company through Monday May 3rd at noon. 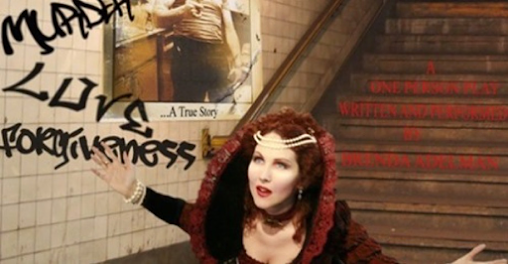 Adelman, now a Spiritualist Psychologist weaves her tragic/comic journey (more like a Greek tragedy) through her growing up years in Mill Basin section of Brooklyn the daughter a Jewish ‘Guido’ father and Bohemian artist mother, Barbara, who was intrigued with Shakespeare. Adelman takes on the persona of Mother, Father, Brother and assorted friends with ease and enthusiasm that easily draws us into her family drama without our even realizing it.

Her story traces her growing up years, her parent’s rocky relationship, and her travels with her mother and undying love for her father. But when  he shot her mother point blank in the head in 1995, copped a plea and spent two years in prison never admitting to or telling Brenda the truth about her mother’s death she was ready to jump the love boat. The piece de resistance came when her father married her mother’s sister. That was it for Brenda. While she knew that her father was a womanizer she never thought he would pull off something like this with her own aunt!

Most of us have our Shakespearean or unspoken secrets hidden beneath the recesses of our memories but in “My Brooklyn Hamlet”, she lets them all out to air bringing the characters close enough for all to see the comparisons of the troubled Hamlet.

Directed by Charles Peters with Ted Leib as cinematographer ‘MBH’ is worthy of a look see.

Adelman, who is so natural on stage with only a few articles of clothing to change character’s is a master storyteller and she does it all in sixty minutes. She’s engaging, funny, somewhat a tragic figure yet one always has the feeling that she is a survivor.

She received a Best Actress nomination at the Orlando and San Diego Fringe Festival. She is the recipient of a Hero of Forgiveness award from The Hawaii International Forgiveness Project.

“My Brooklyn Hamlet…” ends on a ppositive note for Brenda, her family and the audience and becomes a life’s lesson in forgiveness, love and acceptance.

Posted by Carol Davis at 8:14 PM No comments: