Hershey Felder As I’ve Never Seen Him Before.

Over the years Hershey Felder has been George Gershwin, Fryderyk Chopin, Irving Berlin, Tchaikovsky, Franz Liszt, Leonard Bernstein (twice), Lincoln, An American Story",  and Beethoven (twice). He directed Mona Golabek in her one -woman show “The Pianist of Willesden Lane”. He has circled the globe with his wonderful musical biographies, skillful artistry and gripping stories about all of the above. 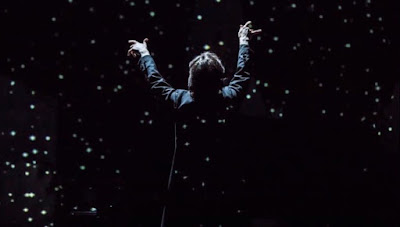 He’s written compositions, operas and ‘Love Songs of the Yiddish Theatre to name a few. Just recently he appeared on ‘Jeopardy’ ‘narrating questions about composers while playing their music’. To say that he is a one-man walking, talking musical genius would be an understatement.

In 2008 Felder presented his solo piece “Beethoven, As I Knew Him” in a world premiere at the Old Globe Theatre. Back in San Diego ten+ years later and at a new venue, The San Diego Repertory Theatre through March 24th, Felder has expanded his ode to the renowned composer in “Hershey Felder, Beethoven”.
Taking on the roles of all of his character’s is Felder’s trademark. In both Beethoven pieces he assumes the character especially while playing their works. His updated “Hershey Felder-Beethoven” is unequivocally the best of Hershey and therefore “Beethoven”.

Yours truly has seen all of the above mentioned and then some, and from my observances the afternoon I saw him, there was a radical change in his demeanor; his passion, his affectionate handling of the notes he played, the expressions both in body language, mannerisms and facial expressions. In matters of the heart, I felt a deeper love affair between the actor and his subject.

As most familiar with the life and times of Beethoven, Felder who has done detailed research at The Library of Congress, gives another running commentary that begins in the graveyard, taking place in Vienna 1863, where his remains lie. Taking on the persona of Gerhard von Breuning, the son of a family friend and author, the question arises as to whether to bury and seal Beethoven’s skull or leave it in tact for research. From here on he becomes von Breuning as he shares Beethoven with us. 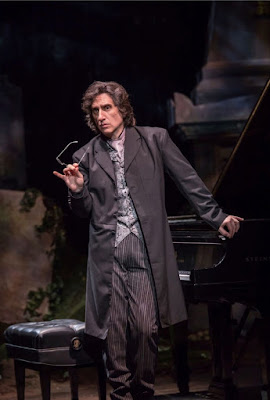 Again the topic of Beethoven’s early onset of hearing loss is at the center of this composer’s genius; his challenges, his family, his moods his interactions, his on again off again relationship with his brothers and parents, who according to the records were diametrically opposed in personalities, and his ability to compose without benefit of hearing what the music sounds like outside own head. Here he departs from the past and makes young Beethoven more of a real person with mood swings as most he came in contact with never knew of his hearing loss.

But unlike his previous “Beethoven As I Knew Him”Felder is more fluid in his delivery of the composer’s life and times. Completely engaged with Beethoven’s music at the piano, and as stated above, his performance is so much more thrilling as he gives us more than snippets of the maestro’s works as well as the man himself.

And when he played the genius's #9th, , the hall shuttered as he pounded out the notes with such force that everyone in the house almost came alive as so they showed their appreciation when he played “Moonlight Sonata in C sharp".

In contrast, his nimble fingers barely touch the keys as they floated across the ivories in “Fur Elise” or when he announced his next subject, Debussy as he played ”Clair De Lune”.

In contrast to his first piece that was thrilling to say the least, there is a definite recognition in his feelings of a deeper and heartfelt involvement. 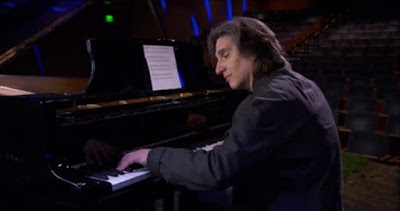 With Felder in charge of scenic design, Joel Zwick directing, Christopher Ash’s dark and brooding lighting design and projections of the cemetery, associate director Trevor Hay, and including this reviewer’s point of view, “Hershey As I’ve never Seen Him Before” is as significant as it is emotional.

There is still time to catch this excellent production. Two thumbs up.