In 2016 Hillary Clinton was the first woman to become a serious contender for president of the United States. The fact that she lost her bid in the Electoral College will be on the minds and lips of millions for years. The fact that she was so close to breaking the ‘glass ceiling’ but was stifled by a schoolyard bully says volumes about the way our country sees women vying for leadership positions.

In 1969 Golda Meir was elected Prime Minister of Israel; Angela Merkel is Chancellor of Germany, Estonia, and Switzerland. New Zealand, Taiwan, Myanmar, Nepal, Malta, Norway, Chile, Denmark all had/have women as either heads of state, presidents or whatever those countries want to call their leaders.

Someone please explain to me, why the hell we here in the U.S. of A. still don’t consider it essential to elect a woman president but it’s OK to elect a chronic liar and bully to this highest office in our land? It is after all 2017. Never mind, don’t get me started!

This brings me to the Dolly Parton (music and lyrics) and Patricia Resnick (book) 1980 musical aptly titled “9 To 5 the Musical” which is now in an ambitious production at the Spreckels Theatre downtown through Feb. 26th as San Diego Musical Theatre celebrates its tenth year.

Parton’s ode to women in the workplace based on the movie of the same name traces the journey of three suppressed and overworked women who pretty much carry the workload for ‘Consolidated Industries’ their place of employment.

Violet Newstead (Joy Yandell) is the long -suffering single parent office manager, Karyn Overstreet (Doralee, Parton’s alter ego) is Hart’s personal secretary (that everyone thinks is his playmate) and down home country bumpkin, and Judy is the recently divorced and newcomer who never before worked in an office (Allison Spratt Pearce).

They work together in a space dominated by a misogynistic, chauvinistic and self -centered boss they all love to hate by the name of Franklin Hart Jr. (David S. Humphrey). Humphrey does an outstanding job both physically and with outstanding chops to match. “Here For You”.

Some of the more pressing and still relevant issues like equal pay, double standards for promotions, treating women as sex objects, dress codes and career opportunities are played out with some pretty high level gyrations as when the three kidnap the boss and stow him away holding him hostage while they go about transforming their home away from home from 9 to 5, into a more friendly and work environment.

While the show doesn’t sport much razzle-dazzle, SDMT has a penchant for attracting some outstanding talent on both sides of the isle, actin, singing and technical.

2016 earned them a Craig Noel Award for Outstanding Musical Direction and Outstanding Lead Performance in a Musical, Female for “Ragtime”).

This current production backs up that claim with Christina J. Martin’s lighting, Kevin Anthenill’s sound design and some cool projections and Janet Pitcher’s coordinated period costumes that add to the overall look and sound of the show. 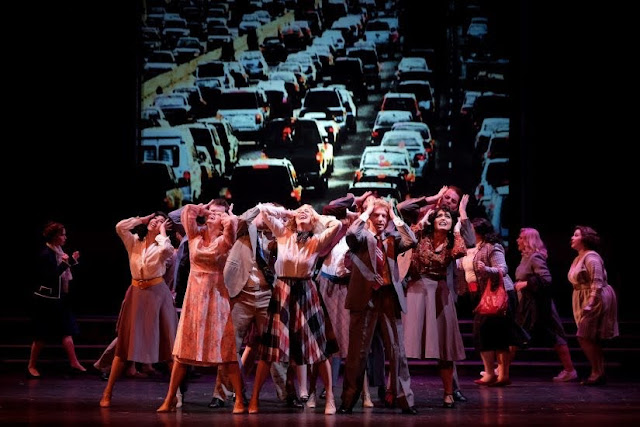 Cynthia Ferrer directs with efficiency and enough humor that makes it difficult not to chuckle. Tamilyn Shusterman choreographs bringing out the best (another strong area for SDMT) in the entire ensemble with at least 20 performing including Wendy Waddell,  Bethany Slomka and Siri Hafso.  Don LeMaster heads the SDMT 13 piece band.

Joy Yandell, who is excellent and pretty much carries the show, is in almost every scene (“One of the Boys”). Her talents shine. In the end she finds true love and a position of leadership she well deserves. All three work overtime (pardon the pun) to keep the story and their jobs afloat. “Let Love Grow”.

Karyn Overstreet is a hoot as the buxom pistol packin’ mama who threatens to transform the boss from a ‘rooster to a hen’ if he doesn’t comply. “Backyard Barbie”.

Allison Spratt Pierce (in another spangled gown compliments of costumer coordinator Janet Pitcher) finally grows up and finds herself to be a competent working woman. “Get Out and Stay Out”  and “Shine like the Sun”.

Candi Milo provides another layer of comic relief as the company/bosses spy Roz Keith. She is loyal to her boss hoping he will throw her a bone only to be loathed by the others. She turns in a Brava performance. “Hart to Hart”.

“9 to 5 the Musical” opened on Broadway in 2009 to modest reviews. But SDMT has come a ‘long way baby’ and based on past and future productions (Their next show is “Damn Yankees”) they are in for the long haul.