A Blast from the past, “Damn Yankees” makes a return to San Diego after a twenty + year hiatus.

Those damn Yankees! That was the rallying cry of so many of us Boston Red Sox fans. In those days the frustration of having to lose so many games to team just about 100 +miles to the south was more than we could bear.

While we were still carrying the curse of the Bambino on our shoulders, Boston managed to win American League championships in spite of it all. But while we were winning, the Yankees were slowly building their team to become one of the most successful in the American League. 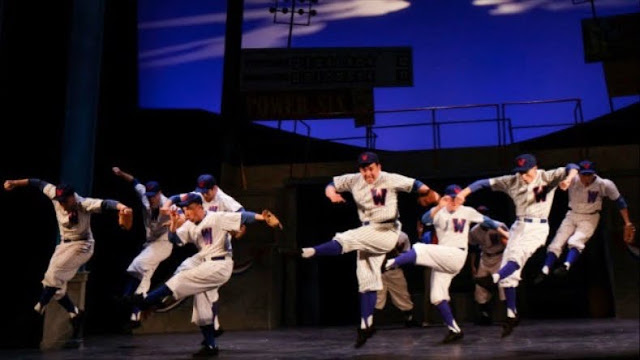 The rivalry was taken very seriously by both sets of fans. With so many detractors both in the American and National Leagues, why not write a book, a musical about fantasizing a win? Any win with any team will do.

In 1993 George Abbott was 106 when he came to The Old Globe to watch his “Damn Yankees” in a new revival directed by Jack O’Brien before moving on to the Great White Way.

Abbott and Douglass Wallop wrote the book and Richard Adler and Jerry Ross wrote the lyrics and music for “Damn Yankees”. Both Adler and Abbott were in the audience at The Globe’s opening. The place was abuzz. To my recollection, Abbott was said to have loved the production.

The musical comedy “Damn Yankees” based on Douglass Wallop’s novel “The Year The Yankees Lost The Pennant” opened on Broadway in 1955. The story takes us on a whirlwind tour when another set of fans in Washington DC are up against the Yankees in a face off to carry the pennant home.

Let’s face it folks, what’s not to love about the Yankees losing the World Series pennant to the then Washington Senators? And with Adler and Ross’ score that includes “Heart”, “Shoeless Joe from Hannibal, Mo”, “Whatever Lola Wants”, “Who’s Got The Pain”, and “Two Lost Souls” plus, plus a variety of other tunes tailored for the show it was a natural ‘out of the park homerun’ then for our home team at the Globe. It starred Victor Garber as Applegate and Bebe Neuwirth as the siren Lola.

Middle -aged Joe Boyd (a convincing Steve Gunderson) can hardly contain himself, (“Six Months Out of Every Year) he’s so upset watching his hometown team, The Washington Senators, get trounced by The New York Yankees that he would be willing to do anything to be able to set the clock back and play for the Senators. His team needed a win.

Somewhere out in the night some someone, a Mr. Applegate (Neil Dale) AKA The Devil, approaches Joe and makes an offer Joe can’t resist.

He will give Joe an opportunity to play on the hometown team as a younger version of himself and possibly become the slugger Joe thinks is needed to save his Senators, but there will be a price to be paid. He has to leave without saying goodbye to his wife Meg and probably never return. In other words he just vanishes into the night with his glove and an old pair of cleats. (“Goodbye Old Girl”)

It’s a twist on the Faust story with one caveat; Joe establishes an escape clause that allows him to return to his beloved wife Meg (a lovely Tracy Ray Reynolds) after the season ends.
Much to the dismay of Applegate who wants Joe’s soul forever, but because of the deal they made with Joe able to return to his old life, he enlists  Lola (Leslie Stevens/ “Whatever Lola Wants”) 'best home wrecker on his staff' to seduce Joe into staying on permanently with the down under crowd.

Things get a bit shaky when Lola falls for Joe and Joe can’t stay away from the old homestead. Applegate…well he’ll just have to find another soul to convert (“Those Were The Good Old Days”).

But never forget the revenge of The Devil. Applegate has plan B when he tries to subvert Jose’s credentials, which adds a little (very little) drama into Joe’s success.

San Diego Musical Theatre is digging in on this opening show, “Damn Yankees” marking its eleventh season. Always touting their live and full 20+ strong orchestra under the able baton of conductor Don LeMaster, choreographed by Jill Gorrie and deftly directed by James Vasquez, we are ready to ‘PLAY BALL”.

With strong performances given by Neil Dale as Applegate, some hard core dancing by Leslie Stevens’ Lola, a very handsome and laid-back Chaz Fuerstine as young Joe Hardy and a versatile cast of about 25 strong that sing, dance, do pushups, twirl and swing bats, juggle baseballs there is much going on in the locker rooms but not so much on the field, but that’s OK we get the picture.

Kate Sapper is a standout as the ever present sports reporter and locker room favorite Gloria. She takes a leap of faith as she takes a swan dive from atop the bleachers wall into the waiting arms of the Senators team of players. Awesome!

Team manager Van Buren, (David Kirk Grant) is fine as the head scratching manager thrown off his game by Applegate who always seems to be ‘there’ when big decisions need to made about Joe’s identity.

Jon Sangster, Luke Harvey Jacobs, Paul Morgavo is the commissioner, Lafras le Roux is Smokey and Jonathan Sangster is ‘Rocky’. They are some of the handy -dandy/ singing, dancing players on the team.

A gaggle of women including Christine Hewitt as Sister, Brooke Farnum as Doris and Laura Bueno all play neighbors and fans willing to follow and support Joe Hardy’s right to play in the playoff’s. It all adds up and contributes to the production’s the depth and width, not to mention “Heart”.

Winner of 11 Tony Awards including Best Musical and Best Choreography (Bob Fossee) “Damn Yankees” is a blast from the past. And ‘tho it has some memorable songs the story feels a bit out dated and sluggish at times.

On opening night there were some nagging sound problems (Kevin Anthenill) that by now I’m sure have been ironed out. Both Neil Dale and Leslie Stevens body mic’s faded in and out and was a bit frustrating not to be able to hear them. 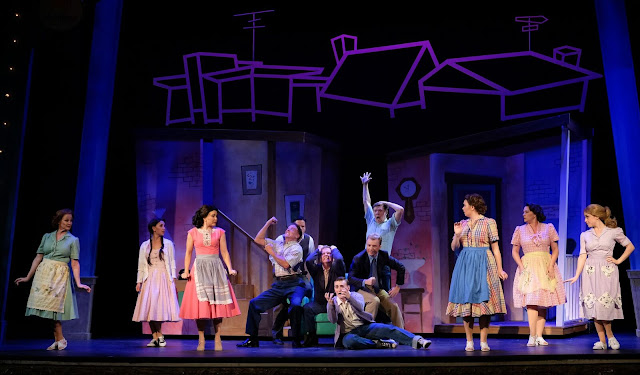 Janet Pitcher’s costumes dating back to the old baggy striped uniforms and Applegate’s red sox (oops) and black suit, and 50’s looking dresses on the women give a sense of time.

Sean Fanning’s cuts out frames of Joe’s neighborhood with TV antenna atop the houses give a cartoon look off in the background. The locker rooms looking serviceable with clothes scattered about is probably the right look.  Nate Parde’s lighting design is especially effective during Lola’s dance/ seduction numbers.

Next up on the roster is SDMT’s  ‘Pump Up The Volume”.

Photo: Ken Jacques
Posted by Carol Davis at 11:41 AM