“Roz And Ray” Hits Emotional Buttons Across The Boards.

Start with a topic you’re familiar with, most will say when giving advice to an up and coming possible next Pulitzer Prize Winning playwright.

San Diego native Karen Hartman began writing plays when she was fifteen and a student at La Jolla High School. The Playwrights Project founded by Deborah Salzar was the vehicle Hartman used to scoot her along to bigger and better things with her natural gift for writing.

Two time recipient of the Edgerton New Play Prize, and Senior Artist-in -Residence at the UW School of Drama, Hartman’s gut wrenching and emotionally gripping play “Roz & Ray” is now being staged in the Lyceum Space of the San Diego Repertory Theatre through Oct. 1st.

Under the deft direction of Delicia Turner- Sonnenberg and with two noticeably opposing antagonists, both physically and emotionally, the story unfolds to an almost unbelievable yet almost predictable conclusion… with a few eye-popping twists.
The characters, Roz (Carla Harting) and Ray (Steven Lone) are a fictional pair but the background materials used as the inspiration for the play are homegrown and very real.

With health insurance in the headlines these days it’s fitting that a play zeroing in on health care crisis, hospital protocol, insurance companies and independent labs creating formulas that we all depend on are the many topics of discussion in Hartman’s heartbreaking play.

Physician Roz and her patients, twins Mikey and Ray, Bug Ray son’s are discussing the advantages of the new magic medicine they will be needing to help their blood to clot when and if they fall or hurt themselves as the pay opens. Ray Leon is all over himself praising Roz for the special attention she is paying to his boys,

The twins were born with a rare bleeding disorder and as hemophiliac’s they need blood transfusions several time a week that in the past kept them hospitalized for several days at a time. This new magic medicine, Factor V11I, requires one injection, done at home, easy! It’s 1976. “We’re done with the dark ages.”

Set (John Icovelli) in the simple office of Dr. Roz stands a metal table acting as a desk, a phone, a few chairs and 3 sliding or push doors leading to back rooms, a reception area and or an exit, a mobile of blood in transfusion bags hangs above and in the corner is a first aid kit with the next home batch of Factor III. The dates are projected (Sherrice Mojgani also credited for lighting) on the walls in bold as the years pass in time from 1976 to 1987. 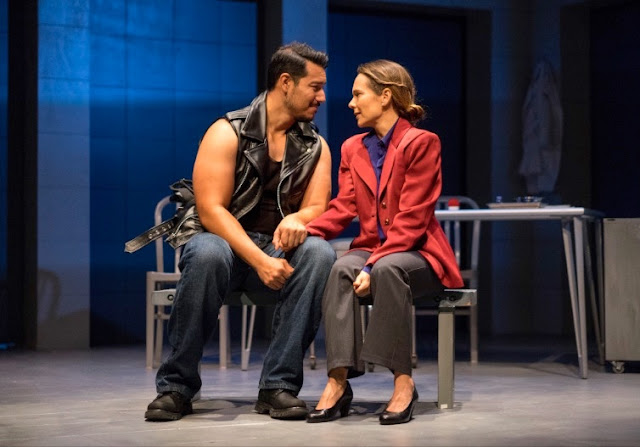 The scenes move back and forth in time with Ray and Roz discussing the progress made in the medical field to the findings made that some of the Factor III might be tainted with the HIV virus and how that will or maybe has already affected the health of Little Ray and Mikey.

“They might have been injected with a ‘blood borne plague’. Not once. Not twice. But up to three times a week. For their entire childhood.”

At some point the relationship between Roz and Ray a romantic connection and liaison grows, something she fights (not hard enough) and he pushes. He’s divorced and still angry with his ex, Evelyn.

In between their secret meetings, (in her office or her apartment to which she gave him a key, her home phone number) the conversation develops into a lesson on how for profit pharmaceutical companies ‘market’ their product in hospitals plugging away at their magical drugs.
Sooner or later he is picketing outside the hospital “Dr. Ray Kagan Killed My Son”. She gave him the book “When Bad Things Happen to Good People”. “It’s written by this Jewish Fellow”.

She knows he has sex with men. “Are you gay”.  “Did I just seem gay?” He denies it. She insists he use protection all the time.

She saw the study. She kept it from him. She approached the hospital. Do nothing. Everyone was making bucks off of Factor 8, including Children’s Hospital.  She’s a hematologist oncologist not an epidemiologist.

How they test, positive and or negative never really reach the patients ears until its too late. But the journal reported two deaths in eight cases; from a medical standpoint it’s insignificant. Does she go with her hunch that the Factor is tainted and discuss it with others in her field, or does she stick with hospital protocol and let the cards fall where they may?

Harting and Lone are Roz and Ray. She is the loving but timid Doctor afraid of making a mistake, he is a semi-closeted gay man hell bent on saving his sons so they can lead normal lives. Their nuances, casualness and easy way with each other are more than persuasive. But the outcome that was never in doubt plays out against bitterness and tragedy to the very end.

Both actors embody the characters and wear them perfectly. Lone is virile and strong and convincing. Harting is dwarfed in size next to him, older and better versed and noticeably falling hard.

The emotional ups and downs, the suffering and grief, the stress and lovemaking; the all out frustration resonates through the 90 or so minutes that it takes to move from optimism, friendship and lovers to sheer despair and near suicide is more than imaginable in this timely play.

Aids was the plague of the 80’s and the plays “Normal Heart” by Larry Kramer details it chapter and verse. This play came about through some family digging on Hartman’s part.

In 1992 an article appeared in The San Diego Reader naming Hartman’s father as one of the doctors ‘central to the issue facing the issue to hemophiliacs at the time.

Thousands upon thousands of hemophiliacs died as a result of tainted HIV blood. At the time President Reagan refused to take any action on the epidemic/crisis. Gay men became the targets of hostility, shame and right wing religious bigots.

Not much as changed in their religious hypocrisy but thankfully so may were and are able to get the medical help they need.

Bravo to Harting, Lone and director Delicia Turner-Sonnenberg (who makes everything look easy and yet profound) and Karen Hartman for bringing an important issue to the fore and making it understandable to civilians not connected to the medical profession.

There’s not much time to catch this one, but I urge that you do.