If you take each word separately in Eric Bogosian’s 1990 “Sex, Drugs and Rock ‘n Roll” now on stage at Ions BLKBOX Theatre through Oct. 28th, you could write a great TV sit-com/movie/ play/WH tweet or stand up show about each word.

Oh but wait they are out there en-mass. Mr. B. zeroes in, combines and connects the dots and comes up with a well oiled, somewhat dated and cynical observations of a society gone mad as the drug scene explodes in the 1980's.

“Sex, Drugs, Rock ‘n Roll” was Eric Bogosian’s swan song (he wrote six plays including “Talk Radio” in which he was nominated for a Pulitzer Prize) about the drug culture world of the 60’s. 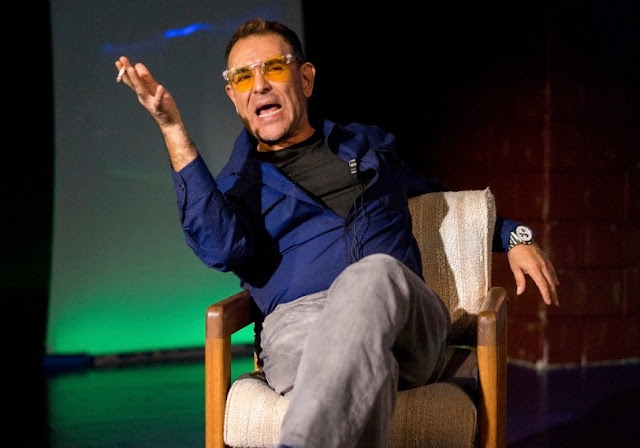 After its big splash on Broadway he moved on to other areas like movies, directing and writing, but drugs are still a cultural drag on our economy and more importantly on the lives of some of the best and brightest that we have sacrificed to this epidemic.

Perhaps that’s the reason for ION’s interest in or… that it’s a great solo piece for Raygoza, which it is.

Bogosiasn’s drug induced world, in retrospect, seems far away from today’s epidemic where drug companies along with our elected leaders in Washington, pharmaceutical companies and doctors’ greed to make a profit off them, not street drugs but prescription drugs, can’t write prescription’s fast enough to line the pockets of the industry magnets and in turn, theirs.

‘Just say no’ is distant reminder of how non -effective that solution proposed by a long ago White House, blinded with nearsighted judgment by those who were afraid to take the bull by the horns then, letting the epidemic slip through their hands making future generations deal with it, and most ineffectively. 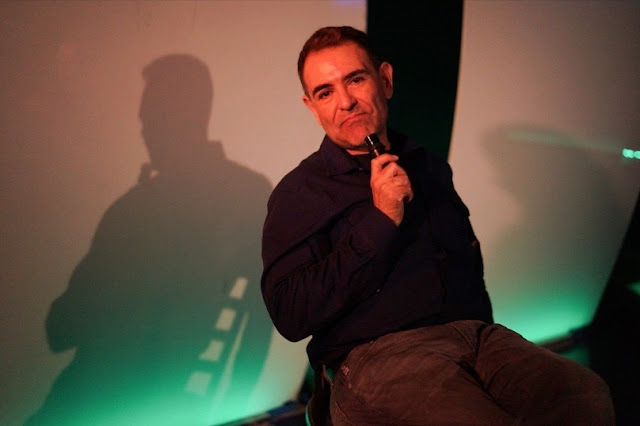 In retrospect, Bogosian’s world of stories that he brings to the fore are troubling to say the least. They are set against a dated background as most of the characters portrayed in his then hit “Sex, Drugs and Rock’ n Roll smack of misogyny.

In today’s world of political correctness, can we/should we overlook and or allow his treatment of women as objects to be manipulated? You be the judge.

Claudio Raygoza, co-founder, Artistic Director, Designer at ION Theatre gives a bravissimo performance as the artist himself takes us on a journey into Bogosian’s world of “Sex, Drugs and Rock ‘n Roll”.

He introduces us to as series of characters, most not unlike the other’s except for the fact that some are prosperous, some ‘victims of an unjust society’, some are convicts, some homeless, some slime and successful, some unfaithful but all are hustlers in one way or another.

Take for example his British Rock Star, now celebrating five years of sobriety claiming to give back to the ‘Amazonian Indians’. “I think they’re Indians …the people down there in the Amazon, that we’re helping…in the jungle…whatever…” with the earnings of his new album. “I think everybody knows I used to do quite a few drugs… but you know drugs are no good for anybody.” “Yes I was a bona fide addict.” 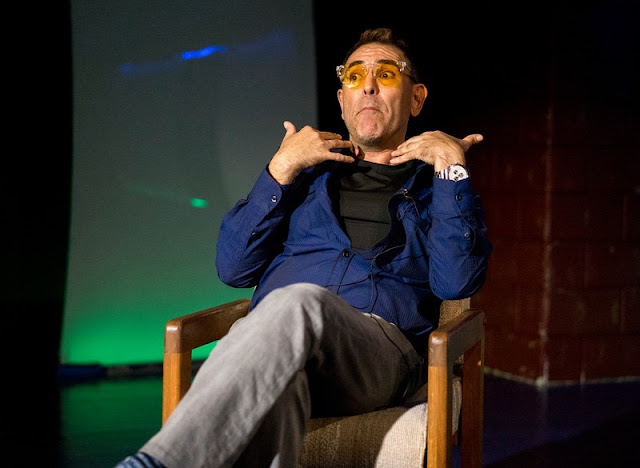 Raygoza marches seven or so such stories out on his simple set designed with a chair, some Lucite looking panels with enough room to exit and or enter and a few props, (sun glasses, a cigar, beer bottle) each with a different point, yet similarly the same bravado when all is said and done.

One, ‘The Stud’ talks about how endowed he is. “I‘ve got what every guy…and every woman wants. And all the looks, brains and money in the world can’t buy it.” “I’m ‘endowed’.

Bogosion goes from the philanderer in ‘Candy’ to the successful immigrant who has it all in ‘Live’ to ‘Grace of God’ a just released from Riker’s Island begging for money to ‘Rock Law’ and a big shot balancing his girl friend and his wife on a phone call after he’s told that he’s being sued.

In each one of the monologues Raygoza has perfected accents, the body language of that particular personality and the various stances they take; the way they talk into the phone, hold a cigarette or sip from a beer bottle.  He’s got it down pat. Hats off to him. 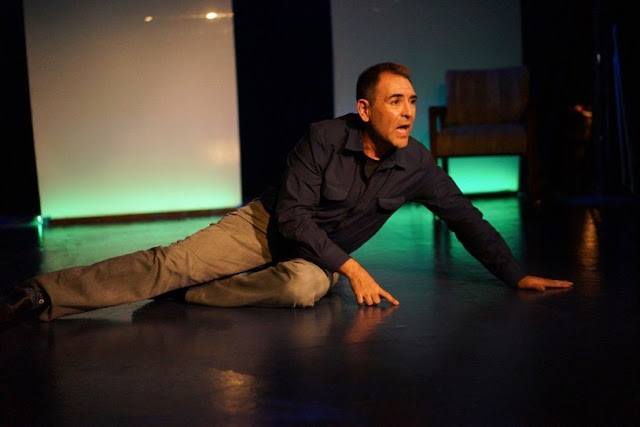 Bogosian, who hails from my home state of Massachusetts, is quoted as saying that “he considers himself as Everyman from the Northeast”.

As one 16 years his senior and as one, I know I know, who has never ‘done’ drugs, these stories don’t necessarily need the drug element to make them work. We all know these characters in some way shape or manner we just haven’t written them down.

Having grown up in the 40’s and 50’s and working in my Dad’s grocery store in the not so wonderful part of the city, I could fill your head with characters just like those in SDRR. The one difference, they drank booze to numb themselves instead of smoking pot and Aid(s) was a word we used to describe someone helping someone else out, Rock ‘n Roll was just coming of age with Fat’s Domino and Bill Haley, and sex was…well sex and that much has not changed, except we are being taken back a few years as women's rights are now somewhere back in the dark ages again and the talking heads in DC seem OK with it.

Enjoy Claudio Raygoza in another splendid show of versatility and showmanship.