Ion’s “Cabaret”: A Treat, A Feast and A Horror Show All In One

One can never fault Ion Theatre Company for shirking its duty when producing a show be it drama, historical event or musical. For its latest up and running production of the Kander, (music Ebb (lyrics) and Masteroff (book) “Cabaret” all the stops are unplugged.

From beginning to end, the audience becomes part of the performance inside the Kit Kat Klub, that den of iniquity where most of the action takes place. Cabaret tables are set up along the front row of the tiny space on 6th Ave. and patrons are treated to some refreshment.
Those not in the front were equally treated as patrons even before the house lights dimmed as the Kit Kat girls and or boys mingled among the guests and held small conversation.

Other cast members took their places or walked around. All the while commotion and excitement rippled throughout the theatre resembling a party like atmosphere on opening night.

And then drum roll…The Mistress/ Emcee and her/his muse/Nazi Youth (Linda Libby and Scotty Atienza) begin the party by welcoming everyone in. “Willkommen” “Leave your troubles outside.”

Linda Libby, a talent of many things wonderful, once again impresses as the omnipresent Emcee (“We are here to serve you”) dressed in top hat, tails and velvet knickers (Keira McGee) with lipstick smeard on her lips. Her fate is predetermined, but no spoilers here.
Young Scotty is made up to scare the bejeasus out of the most seasoned theatregoer. He is dressed looking somewhat like a Chaplinesque character or someone out of a circus playbook as he claps his small cymbols while shuffling notoceably throughout the comings and goings,  somewhat an irritant  to the elder Emcee.

The setting is Berlin, 1929-30 before the onset of the war and just before Hitler came into power. At tht time Germany was a country where decadence was the norm; where anything and everything was acceptable.

Things were about to change.

Christopher Isherwood’s 1929 book, “Berlin Stories is the basis for the work. “I am a camera with its shutter open, quite passive, recording, not thinking”. In it he described one of the characters as a ‘glamorous but eccentric English woman known as Sally Bowles.

In the 60’s director Hal Prince ‘revolutionized the story by putting Sally in a cabaret and then making the cabaret a metaphor for Weimar Germany’. Joel Grey was the Master of Ceremonies in this new incarnation with music by John Kander and Fred Ebb and book by Joe Masteroff. Some might recall the movie version with Liza Minnelli as Sally and Gray as the Emcee.
The play has been tweaked to fit the times, but the underlying themes of prostitution, abortion, drugs, homosexuality, promiscuity, anti-Semitism and the rise of Nazi Germany are all still in tact.
Ion’s splendid production stars the invincible Cashae Monya (“Maybe This Time”) as young Sally Bowles and handsome but young looking Drew Bradford playing Cliff Bradshaw (“Perfectly Marvelous”).

Bowles (“You have to understand the way I am Mein Herr”) the lead singer at the Kit Kat Klub, is not in touch with the outside world and strives to keep her job against all odds.

Big as a minute Cashae is a stunner as she moves through the moods and changing times (“I Don’t Care Much”) of her unsettled world. What a great choice and what an intellegent and stirring performance.

The opposite ends of the spectrum of romanitc interests with underlying themes being played out between Bowles and Bradshaw features Fraulein Schneider (an irresistable Li-Annie Rowswell), the German woman who rents out apartments and her Jewish romantic interest, (“It Couldn’t Please Me More”/”Married”). Herr Schultz (charming Ed Hollingsworth) who owns a fruit stand and shows his love with hard to come by fresh fruit. (“A Pineapple”) And a Jew who refuses to accept the unthinkable.
The American Bradshaw, caught up with the eccentric Sally Bowles, offers English lessons to Ernst Ludwig (a convincing Patrick Gates) an acquaintance he met on the train to earn extra cash to support his love interests habits. (“Money Makes The World Go Round”)

Later Ludwig uses Bradshaw to launder money for his new cause, the rise of The Third Reich, unbeknownst at first to the writer.  Bradshw is furious when he sees the handwriting on the wall (Ernst wearing an Nazi armband) and urges Sally to leave with him before things get worse. (“Tomorrow Belongs To Me”)

The world as they knew it collapses on Schultz and Schneider when Ernst tells her that their marriage cannot happen because Schultz is Jewish. Remember the Nazi’s are trying to get the ‘Jewish Problem’ solved. (“What Would You Do?”)

Exceptional performances by the Cabaret Boys, Bobby (a subtle reference to his homosexual connection to Cliff), Victor, Hans and Herman (Dallas Perry, Steele Severson and Patrick Gates) who take on multiple roles singing and dancing to the athletic choreography of Michael Mizerany
By time the Emcee sings his/her villainous “If You Could See Her” duet with the lady gorilla that ends with … she doesn’t look Jewish at all’, the die is cast.

What hits us over the head is when the young Emcee, an amazingly talented and scarry looking fourteen year old Scottie Altienza (Le Miz award recipient from San Diego Theatre Critics Circle) comes out after the Nazi’s take the Emcee and Kit Kat Girls away, and dons his red baseball cap with a Nazi Swatsticker on his arm singing a reprise of “The Future Belongs To Me”, there is a collective gasp!

The sinking feeling that smacks you in the gut is indicative of what’s to come. And even though we know the outcome before we enter the theatre, it still sours our taste buds. The sad part about ‘history repeating itself’ is that today, right now, history is spinning out of control toward an end that I pray will not repeat itself.

Production values will wow you. Under the deft direction of Claudio Ragoza who designed the set, Chad Oakley the lighting, with outstanding musical direction by Morgan Carberry at the piano (she also steps up as a Kit Kat girl Frauein Kost ), the all person orchestra does double and triple duty as just about everything else.

Did I mention prostitutes and or lovers? Ooops!
When our guard is let down and we are stuck in the Kit Kat world of dancers, singers, actors and the love life or not of Sally and Cliff, the unfolding romance of Herr Schultz and Fraulein Schneider there’s an unsettling feeling of gloom and doom as the show gathers steam, but still…we sit, we watch, we laugh, we cry foul, we wait.

This is one "Cabaret" you will not want to miss. It's exciting, new and raw.


In 1933 it was a sad commentary on Germany, the German people and the world that allowed it to become.

In 2017 what are we doing to prevent another Holocaust?

If you look at it through my eyes… ‘you wouldn’t feel comfortable/safe at all’. 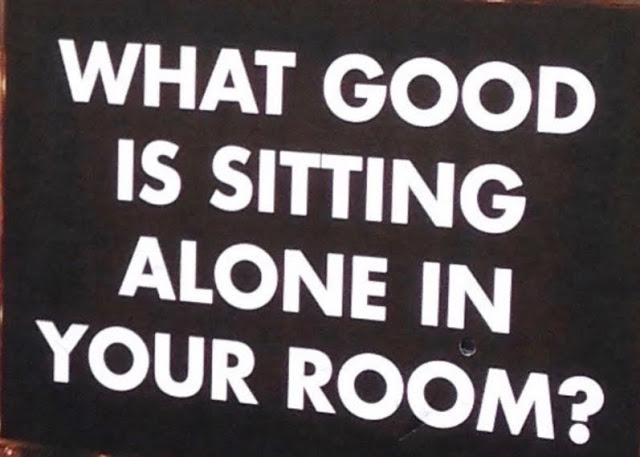