“The Lorax” Hits The Stages At the Old Globe With A Wise Message.

The Old Globe and Children’s Theatre Company in partnership with The Old Vic in London is currently presenting the world premiere of Dr. Seuss’s “The Lorax” based on the book “The Lorax” by Dr. Seuss. It was adapted for stage by David Greig. Charlie Finn wrote the music and lyrics adding a magical touch to Suess’s ode to corporate greed and environmental ruin.

If the Lorax could see us now, he would keep himself hidden away in some other -worldly place until we (the country on loan to us) comes to its senses. In case you just landed on planet earth “The Lorax” is the creation of Ted Geisel aka Dr. Seuss. In a sense the Lorax is Seuss’s alter ego. Accordingly, “The Lorax” ‘came out of my being angry’. 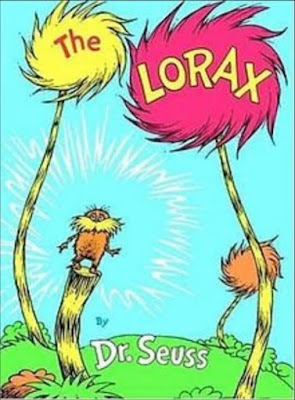 Seuss, best known in Old Globe circles for “How The Grinch Stole Christmas” is still a holiday treat. My three girls cut their teeth on “One Fish Two Fish” and “Green Eggs and Ham”, “Oh, the Places You’ll Go”,  “Horton Hears a Who!” and “Dr. Seuss’s ABC”. Hopefully it will remain on their ‘let’s make a seasonal event of “The Lorax”.

Our family belonged to the Dr. Seuss book club, if you will. Yours truly displays with pride her very own “You’re Only Old Once” (A Book For Obsolete Children). Try reading it some day if you are over, say 50 and you might throw away your Medicare card.

With a creative cast under the deft direction of Max Webster and lively choreography by Drew Mconie, gorgeous, eye popping scenic and costume designs by Rob Howell, Jon Clark, lighting, and sound by Tom Gibbons, outstanding puppet direction by Finn Caldwell and puppet design by Caldwell and Nick Barnes and musical direction by Elan McMahan, the charming yet oft times adult, oft time dark story of the Lorax and how we got to this place of darkness, unfolds on stage.
It’s not always a pretty story and some young-un’s in the audience might not have gotten the full implications. However if you’ve opened a news paper or happened to catch the news just in passing, its about a journey for a young man, ‘a wee Oncelet in the town of Once Hill where his family ran a moof muffering mill.

As the lad grew into a Once-ler he was asked to leave his family home to make room for a stranger who might be able to bring some money into the home and pay for his stay. His family sent him off with ‘a pot of green miff’, ‘a bent banjolele, ‘an old ax’ and some knitting needles. “Why not go and seek your fortune? Come back old, fat and wealthy.”  And off he went!

And wealth was what the Once-ler accumulated after settling in a beautiful fluffy forest filled with wonderfully colorful Truffula Trees and a Lorax! When push came to shove Once-ler started to cut some of the trees down and use the tufts to knit some (what he called) ‘Thneeds, “It’s a shoe, it’s a shirt, it’s a glove, it’s a hat But it has other uses, yes, far beyond that It’s a carpet, a pillow, a nightcap, a sheet A curtain, a cover for your bicycle seat.
In the course of cutting the trees down (“The touch of their tufts was much softer than silk/and they had the sweet smell of sweet butterfly milk”), an orange little person -puppet with a walrus looking blond moustache comes crashing down to the ground with the tufts.

Not at all happy with the situation around him -“I speak for the trees”- the Lorax wants him to stop cutting the trees and think more of protecting the environment assuring him that there is room for both trees and people. They come up with a ‘contract’ of sorts agreed upon and signed that Once-ler promises to abide by.

Unfortunately, the Once-ler’s obsession to make more money is aided by judges, friendly to big corporations that allowed him to spread his operations into more protected forests and ignoring the Lorax’s warnings.

His Thneeds were selling like hot cakes. Greed overtook the need to stop making more products. As they sold, people came, wealth was amassed roads were built, until factories, communities and pollution filled the air. Animals began to look for other places to live. Water supplies and air quality were making them sick, “and the money kept rollin in”. (Watch out for some fart jokes about this time.)

My ten year Jr. reviewer, my sometimes theatre buddy had to lean over, during the show, to tell me that Once-ler (an amazing Steven Epps) was too greedy; he was not happy about that.
Three talented puppeteers Meghan Kreidler, Rick Miller and H. Adam Harris, who is the voice of the Lorax, control his every movement so convincingly they if my eyes were closed, I would see a full sized man-puppet come to life.

Epps' energy as the Once-ler is captivating. Dressed in shades of green from head to toe and with elf like movements, he seems stunned at first that his invention is so successful and that he is wealthy beyond any expectations. With that he even trusts his family (the ones that more or less evicted him) to help run the business.

With greediness as their mantra and the EPA on their tails they couldn’t see the that business grew so big and fast, was so polluting the air and forcing the animals to move, that they were actually stunned when they ran out of tees to cut; no trees through forest, no forest through trees, in fact no trees.

Strong support comes through as the entire ensemble, puppeteers, Storyteller (Ryan Dean), elegant dancing swan Emily Michaels King, Mommy Once-ler (Autumn Ness) who also warmed up the kids before the show with a variety of cool instruments, a variety of Once-ler story tellers and, to my grandson’s chagrin a trio of black clad characters wielding large axes cutting down the trees frightened him a bit. Ten year olds are still young enough to get that fright feeling.
Ted Geisel, who died in 1991 twenty years after “The Lorax” was written and published, was man for all ages. His works were magical, his ideas fantastical, and children all over the world were enthusiastical to read his books.

“The Lorax” isn’t just another reincarnation of his writing, or a movie or a sighting; it’s authentic and hallucinogenic. It’s one of the most entertaining, well spent two -hour’s plus/ that you might use with your pals being The Lorax for all of us.