Vista’s Broadway Theatre is celebrating its 15th year. It is about as intimate a theatre as you can imagine with maybe 50 seats, some as close to the stage as a foot-print away.

Yours truly is a relatively new comer to the theatre having seen perhaps a dozen or so shows there in the recent years; not close to the 107 over the years it boasts. I have always been pleasantly surprised at the quality of work coming from this small space.

Mark St. Germian’s “Dancing Lessons” premiered in 2014 at the Barrington Stage Company in Pittsfield, Mass. It’s another two person play starring Gabriela Nelson (“Guadalupe In The Guest Room”) as Senga Quinn and Mike Martin (“King Charles III”) as Ever Montgomery. Both live in the same building, two floors above/below each other yet they had never met. But things were about to change

“Dancing Lessons” with direction by Randall Hickman now playing at the Broadway Theatre in Vista through Nov. 18th, is more than intimate it’s a play whose characters are both flawed and struggling to keep balance in their lives. Being up close and personal almost puts us in the playing field watching the struggles each puts up with.

Once the spell of the two strangers' uncomfortable introduction is defused the play dives right into the opposing personalities, both of who are predictable and vulnerable.

Ever Montgomery is a Dr./professor of Geosciences at the New York Institute of Technology. He also has Asperger’s Syndrome, a condition that is a ‘pervasive developmental disorder that hinders the patient’s inability to interact socially’.

It’s a form of Autism that the American Psychiatric Association doesn’t treat because those in charge decided it didn’t exist any more, but no one can convince Ever that he doesn’t have it especially when he interacts with others like Senga. 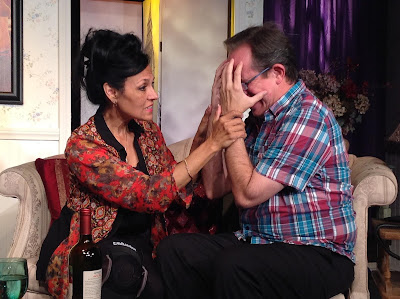 Senga is a Broadway dancer. She lives, breathes and drinks dancing. Unfortunately, she suffered a major leg injury that rendered her ‘off the dance card'  for a long time’. She pops pills and drinks her wine right out of the bottle to get them down. She hates talking on the phone and seems to relish listening to ‘downbeat’ music. She is in a pretty deep funk.

Adding to her anguish, surgery is not an option since she is allergic to anesthesia, its life threatening to her. Her leg is in a brace and she’s depressed and would rather sit home alone and listen to her melancholy music. 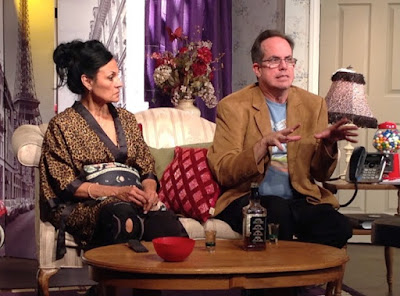 When Ever knocks on the door to her apartment (designed meticulously by Douglas Davis) to offer her a large sum of money to teach him to dance (“I don’t teach dance, I’m a dancer.”) for an event at which he will be the major recipient of an award, the story goes into overdrive as these two flawed human beings find themselves on a journey to learning more about each other than just dancing lessons or how to overcome depression or knowing the boundaries of hand holding.

Ever can’t stand to be touched and Senga, for all intents and purposes, can’t dance as she had in the past but she does have experience and humanity in dealing with others on her side. And so their dance lesson takes on a different rhythm, a different tune, a different step, a different meaning.

Having just seen Ms. Nelson in New Village Arts’ “Guadalupe in The Guest Room”, she is a master in persuasion as she tries to zoom in first denying she will never dance again to allowing Ever to pace himself into becoming comfortable with himself . 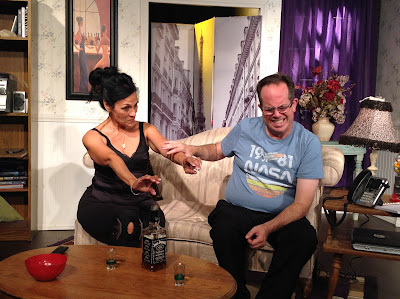 His journey is a bit more complicated since his illness gets in the way of his making noticeable strides. His actions seem just right, as his moves to look relaxed when in fact he’s a bundle of contradictions as when he sits in one of her chairs, is awkward and uncomfortable looking and when he tries to follow her dance moves and he’s as stiff as a board shaking his booty one has to muffle a laugh out loud moment.

On his plus side of the coin, his smarts and knowledge of the Internet allows him to be one -step head of her story and that’s in need of lots of revising. So far the score is LOVE or even as the equalizer on many levels. Yup, St. Germaine even tiptoes into that arena.

Martin, who was part of the ensemble in Coronado Playhouses “Charles III” has all the right moves as one afraid to be touched or intimate until he drops his barriers in a weak moment and all the filters fade.

St. Germaine’s (“Freud’s Last Session”) bitter sweet and touching play is a lesson in patience, the human condition and the need not to rush to judgment. When all is said and done, one would be hard pressed to point out which of the two was more flawed than the other. 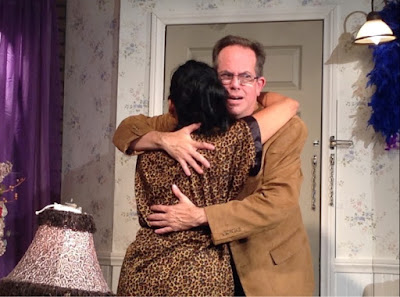 Suffice it to say the playwright surely knows his subject matter and has a keen way of choreographing his characters to keep on track while director and lighting designer Hickman assuredly brings them to life with Nelson and Martin’s finding the right combination for us to embrace them blemishes et al.