One of my now grown daughters used to wait on tables, then rose to manager, went on to culinary school and is now a chocolatier. Whether or not she liked waitressing was never discussed; that part of her career in the food industry didn’t last long, but she is still connected.

Looking around while dining out and watching the servers bust their ‘Alice B. Tok–lasses’ to please customers has to be taxing to say the least. When you have an abusive and alcoholic husband waiting at the door to grab your well earned tips, you’re in big trouble at best.
You’re in deeper trouble when you discover that you are going to have a baby by this abusive rat of a guy, Earl (wonderfully evil, Matt DeAngeles) and what do you do, you bake a pie with bittersweet chocolate and sing a song about it and name it the pie  “I Hate My Husband Pie”.

The 2015 Broadway musical “Waitress”, now on its first national tour at the Civic Theatre, pies and all, plays here through Dec. 2nd. Based on the movie of the same name, follows closely to singer Sara Bareilles’ lyrics and Jessie Nelson’s book according to those in the know. 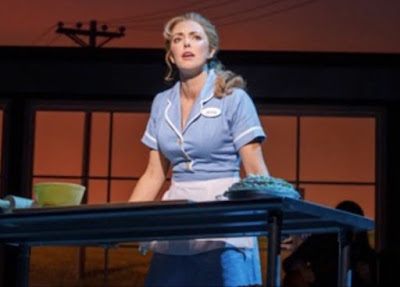 The national tour under director Diane Paulus, that is short lived in our fair city, stars Christine Dwyer in the lead as Jenna. Jenna and her two compatriots Dawn (Jessie Shelton) and Becky (Maisha Queen) share in the duties of placating their fry chef Cal (Ryan G. Dunkin) in ‘Joe’s Pie Shop’ that is over populated with pies and pie racks and pie stacks, a window to see inside the kitchen, some moveable tables and chairs a counter and a great platform for the band on stage, by set designer Scott Prask. All this happens somewhere in the South.

Baking pies is one -way Jenna escapes from her abusive husband and the knowledge that she will soon have a little one to support. These special baking fantasies appear in dreams and, if I have to say so myself, look pretty darn good. Also in flashback (Ken Billington’s lighting) we get a glimpse of her mother being abused by her father. Her mother taught her all she knew about pie baking but not how to get out of an abusive marriage.
Making her life a bit more pleasant is her wacky gynecologist, Dr. Pomatter (Steven Good). He is more interested in bedding her down on the examination table than in listening to what might be going on in her growing tummy. Oh, BTW every time she has an appointment to see him she brings him a home -made pie. Silly girl, not necessary for that one.

Moving on, there are some real fun scenes, the best being between ditzy Dawn and her newly acquired friend Ogie (an absolute scene stealer Jeremy Morse who is all over the place singing, dancing hopping from table to chair head over heels as he declares his love for Dawn. Hats off to both Morse doing the crazy stuff and choreographer Lorin Latarro.

Both Jenna’s pals take turns at being at her side during difficult times.  McQueen, a comedy star as well as belter (yours truly had a difficult time understanding her but I know a singer when I hear one) is also a mover and shaker with attitude, just ask Ryan G. Dunkin’s Cal. Big in stature , he’s really a pussy cat underneath it all.

The mystery diner Joe (gentle and fatherly Larry Marshall) who is very particular about where his food is placed on his plate is kind and fatherly to Jenna making her life somewhat more palatable. 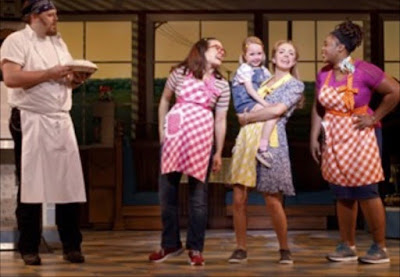 Happy endings come in the form of leaving Earl, taking on the responsibilities of owning your own pie shop, having good friends and knowing that somewhere there is a pot of gold at the end of this pie-centric shop.