In the short span of five years, love was found, bloomed and then faded; so tells the story in the musical lyrics, almost all solo’s, in Jason Robert Brown’s  (“Parade” and “Bridges of Madison County”) “The Last five Years” now on stage at Cygnet Theatre through Nov. 17th.

The story is told in reverse chronological order by Cathy and chronical order byJamie.We follow the beginning of a relationship (“Shicksa Godess”) through the eyes of Jamie, (Michael Cusimano ...“Once”).
Cathy's (Racquel Williams making her San Diego debut) story starts at the end of the relationship (“Still Hurting”) and works her way back to the beginning. They will meet somewhere in the middle of their story and get married. Things will go from euphoria to distaster as a marriage dissolves right in front of our eyes.

Based on Brown’s own failed marriage to Theresa O’Neill,  he feels all the bumps and bruises and hurts of seperation while showing his vulnerable side of being too consumed with his own importance while she can only look on as she gets one turndown after another. (“Audition Sequence”) in her own career.

Both Cusimano and Williams are backed up by five musicians (Patrick Marion is musical Director/ Orchestrator) including two Cellos, a Violin, Bass, Piano and Guitar. The  sound is  rich and filling but  from my perspective and sensitive ears sounded  too heavy on the back end making it difficult for me to catch some of the lyrics.
Jamie is a Jewish boy wonder who seems to have broken the mold among his family of rising Jewish star and marrying out of his faith. In a fun turn he sings about his avoiding every Jewish girl at the JCC in his home town, disappoining his mother and her friends. And in another segment he does a takeoff of a Jewish character in "The Schmuel Song". But as they used to say in my old neighborhood, "He Doesn't look or act Jewish".

His rise to the top of his career with Random House is climbing while Cathy is still struggling to get her first big meaty role as an actress. He encourages her. (“I Believe In You”)

Her “A Summer in Ohio” and “Climbing Uphill” had many in the opening night audience chuckling at the truthfulness of prepping for and going through an audition.

Over the course of five years, 14 songs later, (each alternating with a musical number but sans dialogue) the story of their meeting, discoveries, love, (“The Next Ten Minutes”) understanding and coming together to their final “Goodbye Until Tomotrrow/”I Could Never Rescue You” is played out in full emotional and sensitive tones.

Both have powerhouse voices and the two musical numbers “The Next Ten Minutes” and “A  Miracle Could Happen” give the audience a look at what both can achieve singularly and together. It is a nice change more than half way through the song cycle to see them together singing.
Moving back and fourth from New York City to various parts of the MidWest, “A Summer in Ohio”… where I’m sharing a room with a former stripper and her snake is a kick and a half and Williams nails it, the couple’s relationship is on the move..

Their story seems to echo pending disaster given the nature of exposure and pressure each of the professions require and that means he gets to party with the big wigs. And you guessed it when he sings “Nobody Needs To Know” that his eyes are not only for Cathy.

Rob Lutfy directs these two multi talented musicians through their ups and downs, sentimental and playful momentes with ease on Justin Humphries boxed in set, if you will.

The stage is filled with boxes from moving companies, some filled with a sweater, jacket, a small change of clother and other props, while others serve as platforms to stand on. Hanging across the background is a wall of paper strung together like a wall mural signifying Jamie’s writing and book publishing.
Credit to Michael Mizerany assistant director/choreographor, Anne E. McMill's mood setting lighting, blackouts and fade in’s, Matt Lescault-Woods sound, and Emily Wilson’ simple and comfortable looking costumes.

“The Last Five Years” premiered at Chicgo’s Nightlight Theatre in 2001and was produced Off-Broadwayin 2002. For audiences looking for something sharp, different, charming, meaningful, and a short-90 min. with no intermission before the Holiday rush of old favorites hit the stages, this will fit the bill. 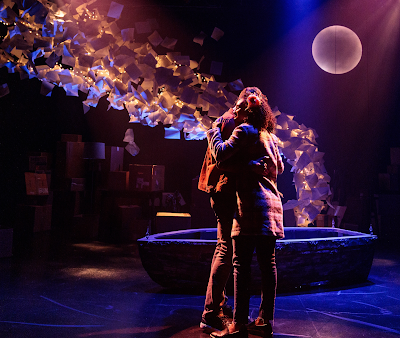