PABLO PICASSO IS ALIVE AND WELL! 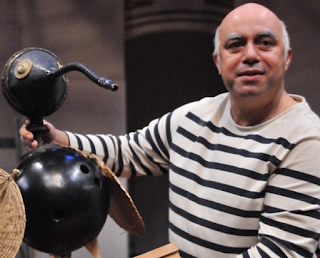 This Picasso!
“A Weekend with Picasso” was the work of a lifetime for Herbert Siguenza; one that the actor/ artist had been preparing for a lifetime. He is simply wonderful, playful and completely at ease as Picasso’s alter ego in this wonderful tour de force.
“A Weekend with Pablo Picasso” was workshopped at the San Diego Rep. in 2010 as work in progress. Siguenza, a founding member of the performance group Culture Clash, wrote the piece, which includes quotes from Picasso’s writings.
The piece was mounted once again three years ago at New Village Arts Theatre and now The San Diego Rep. is presenting the film adaptation of the play for your viewing through Oct.14th.
I found it interesting…well alarming how my memory failed me after watching the streamed film version recently as I struggled to remember some of the scenes. Yes, some of the newer clips of film were taken outside his residence in the South of France 1957 but the rest was filmed on the stage of the San Diego Rep. The outside scenes were actually lovely and gave an openness to the production.
Herbert Siguenza takes on the role of Picasso with relish. He will tell you in chapter and verse about the man himself as he channels Picasso’s every move, mannerism, mood, philosophy, chuckle and thought. He dances, clowns, speaks several languages and gets dead serious about politics, past and present. It all starts as he is lathering himself in his bathtub. Speaking directly to the audience,  he agrees to let us in on his work habits only of we promise to leave at the end of the weekend.
An accomplished arti/painter in his own right, Siguenza will paint a few portraits on stage; some still life and embellish some already finished products. He will tell you about the women in his life, (“When I kiss a woman, I leave my eyes open. I want to see everything”) his politics (with passion) and what a great person he is. Well? “I do not wish my celebrity on anyone…not even my worst enemies” …” The whole world demands from me”.
He’s seventy-six at the time action takes place. “Time is a bandit. When it’s gone, it’s gone. Like a taxi meter. No argument. The older I get, the stronger the wind gets-and it’s always in my face. I’m afraid I have less and less time yet more and more to say”.
At the time of the play, the icon Picasso is to work on a commission for six painting and three vases for a wealthy patron. The play takes place over a three-day weekend in his studio in the South of France where he is working feverishly to complete his commission. Speaking directly to the audience, as the performance opens, he agrees to let us in on his work habits only of we promise to leave at the end of the weekend.
Visuals of a painter at work are everywhere; a pencil drawing of a young Picasso, a photo of Picasso with his wife Dora Maar, cubist paintings, African art, a photo of Picasso working on Guernica, (Giulio Perrone scenic/with recreated styles and clothing that Picasso actually wore in famous photographs by Douglas Duncan 1957/59 that some might call casual elegance.). His studio is visual wonder packed with wooden packing crates, books, photos, food, clothing, easels, engravings with hand scrawled messages and reminders about.
For this reviewer it was a pleasant trip down memory lane when things were simpler and going to the theatre was a treat and a time to gather with old friends.
Yes, Picasso is alive and well and as long as we cherish the memories of Siguenza’s Picasso we can focus on that.
*******************************************************
The production is directed by Tim Powell and Todd Salovey, with Sam Woodhouse as Producer. The production team is rounded out by: Chelsea Smith (1st Assistant Director); Catharina Cojulun (1st Assistant Camera); Ashley McFall (Gaffer); Evan Rayder (Grip & Electrician); Matt Lescault-Wood (Sound Mixer & Recordist); Anastasia Pautova (Art Director & Costumes/Props); Sammy Moore (Set Design & Art Department Lead); Kate Reynolds (Location Scout); and Kim Heil (Associate Producer).
The cost of a ticket is $35.00 and can be purchased on line at: sdrep.org/picasso