Jessica John makes her coming out solo debut in Roustabouts “No Way Back”.

Therapist turned writer, Mahshid Fashandi Hager wrote the play “No Way Back”, Roustabouts Theatre Company is giving it a riveting world premiere filmed production and Fran Gercke is directing. But it is Jessica John who breathes life into Mahshid’s plight as the ten year old, who with her family is forced to flee their home in Tehran, Iran during the Islamic Revolution in 1979.

This true story is seen and told through the eyes of a child (John, Mahshid’s alter ego). She doesn’t miss a beat taking on each member of her family and their relationships with one another, their responsibilities, respect for and about one another and their devotion to family, the beauty of her country, the struggles, trauma’s and obstacles they encountered, the dangers they faced and finally, survival and ‘triumph’.

And that’s the point of John’s coming out solo debut. John ‘swore she would never be able to star in a one-woman show’, but somehow the ‘script resonated with her deeply because it depicts a very similar escape her family took to flee the Middle East many years ago when her Assyrian grandmother was a young girl”. “She escaped, but her mother, brother and 21 of her relatives died in their efforts to reach the United States”.

To put it mildly, John nailed it with razor sharp intensity and focus.  Her accent, her mannerisms and her facilal expressions never faltered. There wasn’t a time in the 100 minute or so show that I doubted she was young Mahshid.

From the time she heard the gunshots outside her bedroom windows, to the heavy footsteps in her house, to the anxious waiting for her “dad” to come home, to her “mom” calling her for dinner (and not to get her clothes dirty), to their leaving their beloved home with only one bag of belongings, to their being confronted by Iranian guards, Kurdish soldiers, bandits and Turkish henchmen,( as well as a small amount of sympathizers,) to their trek over mountains in the snow to reach Germany by way of Turkey and finally to The United States, her performance felt as natural as if she was Mahshid.

John can never go back to not performing in a solo show. Her fate is sealed. If it took her personal interest in the story, deft direction by Gercke, and a theatre (Roustabouts) with Phil Johnson willing to stream new plays like “No Way Back” and “Roosevelt: Charge the Bear” (Just recently seen) then so be it. She deserves a standing ovation and this is my way of doing it. 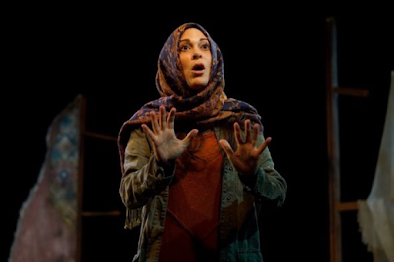 John hopes this play offers viewers a way to understand the sacrifices immigrants make to come here especially in these tremulous days of using immigrants and refugee’s as pawns of a phobic and detestable administration blocking immigrants from entering our shores to separating children from their mothers. We are and always will be a nation of immigrants like John’s family, my family and Ms. Hager’s family and thousands of others that make up the fabric of our nation.

Here are the family Roustabout-er”s that give it the finished and final look.

Where: On line at www.theroustabouts.org

See you on line at the theatre.