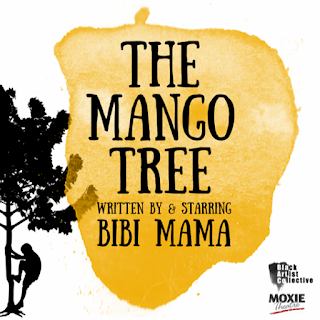 The art of storytelling is as old as Bible Stories themselves. And it came to pass that when Beninese-American born Bibi Mama was growing up in Storrs, Connecticut she spent her early years “observing her father continue the Yoruba oral tradition through storytelling which inspired her love for acting”. According to her father, best -selling author Dr. Raouf Mamma, in a talkback after the show. ‘there was no TV, no internet, Face Book” just storytelling or folklore to make a point without hitting you over the head.

Moxie Theatre is presenting this original play  “The Mango Tree” as part of the SAY IT OUT LOUD Juneteenth Festival and the Black Artist Collective. Ms. Mama, co-directed with Claire Simba. Mama, a recent graduate from The Old Globe-University of San Diego MFA theatre program, is the solo artist who sets the mood, 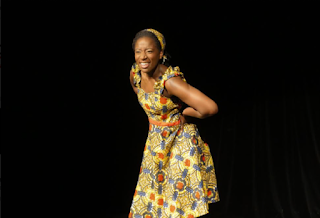 A young girl and her twin brother always celebrate their collective birthdays together, sharing adventures. One of their favorite things to do after their celebration, was to climb the large mango tree by the river’s edge. Although her brother is minutes older, she is the more adventurous egging him on to climb higher and higher, where she claims the mangos are best at the top. Hesitant at first, he surprises her this one day and climbs to the top sending down beautiful and ripe mangos. All is well, right?

But folklore isn’t exactly as it seems when meets the eye. In a sacred, lively and spirited performance Ms. Mama takes us through the ins and outs of lesson building, love of family, right and wrong, respect and dismay of the selfish ‘river goddess’, love and loss and caring after loved ones. It’s a story to be handed down and told from generation to generation, as did her father before her, the subtle and not so subtle. Meanie Chen Cole's sound design added a bit of adventure and mystery to Mama's journey.

The production will be streaming Friday, June 18th at 8:30, and Sat. June 19th at 6pm at moxietheatre.com for tickets.

For more information on the Black Artists Collective go to sdblackartistcollective.com sayitloud.

Each performance includes a pre-show interview with Bibi Mama and her father who is a storyteller and inspired this show.

There are lessons we can all learn from "The Mango Tree",

Posted by Carol Davis at 7:55 PM No comments:

On Becoming Dr. Ruth Shines On Many Levels

When an irresistible force such Tovah Feldshuh

You can bet just as sure as you live

What gives is that over the course of Mark St. Germain’s 90 or so minute play, “Becoming Dr. Ruth”, Feldshuh steps into Dr. Ruth’s shoes and right before our eyes, she becomes Dr. Ruth the famed sex therapist. (“Sex for Dummies”)

But in real life, that’s not exactly how it happened. Karola Ruth (Siegle)Westheimer was born in Germany in 1928 to an Orthodox Jewish home. “sex for us Jews was never considered a sin”. She was a child of the Holocaust, (both of her parents went to the camps when she was just ten.) Before that her mother saw to it that she on the Kinder Transport and sent to Switzerland, but grew impatient when the families treated the children like hired help.

She managed to get to Israel, lived on a kibbutz, fought (she was a sharpshooter) in Israel’s Haganah (Israel’s underground movement) at age 17 during Israel’s fight for independence.

Dramatist Mark St. Germain’s plays, “Freud’s Last Session”, “Dancing Lessons”, “Camping With Henry and Tom”, were all presented in San Diego over the years to fine reviews. His style that he refers to as historical fiction ‘brings life to historical events and personalities’. And Dr. Ruth happens to be one of those characters. 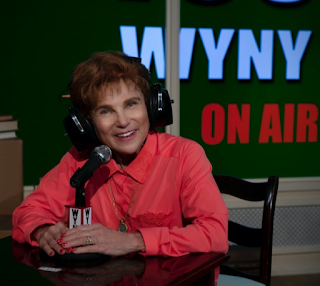 On several interviews with Dr. Ruth, who upon first being approached for this project, refused, he finally made her comfortable enough for her to put her faith in him as a playwright and not to distort or sensationalize her life.

He penned “Becoming Dr. Ruth” in 2012 and now San Diegans have an opportunity to catch the show streaming at North Coast Rep., directed by artistic director David Ellenstein and the pièce de résistance is the one and only Tovah Feldhshuh.

Short in stature with a twinkle in her eyes, Ms. Feldshuh aka Dr. Ruth, walks through the apartment she is planning to move from to a smaller space, stopping every now and then to pull a family picture off a bookshelf that is projected on to a TV in the room, sit in her easy chair or bench and tell us about her family, her children, her three husbands.

Or she might look out her living room window across the river where she can see the Statue of Liberty, and the Hudson River.

Set in the backdrop of her comfortable apartment in New York, (where she immigrated as a single mother), now cluttered with moving boxes (set designed by Marty Burnett) we are under the impression from phone calls from movers and with lots of newspapers for wrapping pictures and other valuables, that she is in the process of moving.

She may stop to regain her composure when talking about her father, who instilled in her, her Jewish roots, (she now belongs to two Synagogues) her faithfulness to Judaism and to her mother who always taught her to look on the sunny side of life. 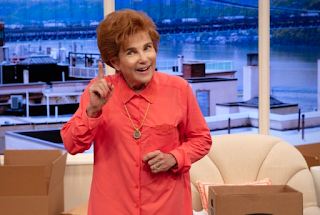 Photo by Aaron Rumley
Feldshuh in an easy and pleasant manner, channels Dr. Ruth with an all-knowing smile, a high pitched 'hmm', a lifted eyebrow or a wag of her fingerand a unique laugh. Her performance is so natural that listening to her tell her stories makes you feel that you are sitting in her living room with her and that she is speaking directly to you.

Aside from the facts and fascinating life she led, Feldshuh gives us an honest and heartfelt heartbeat of the one thumping in the real Dr. Ruth Westheimer. She was a mover and shaker in her own right and with that knowing all smile is still going strong in that apartment she was going to leave over the objections of her two children.

BECOMING DR. RUTH will stream on Showtix4U.com on demand from JUNE 9 to JULY 4, 2021. Tickets are $35 for individual viewing and $54 for group viewing and can be purchased at northcoastrep.org. Runtime is 90 minutes.

I would also urge you to tune in to the conversation between Dr. Ruth, Playwright St. Germain, David Ellenstein and Tovah Feldshuh. She's the real stuff.