Moxie’s “The Children” Puts Us In A Post-Apocalyptic Quandary

Imagine being checked out by a Geiger counter to measure the amount of radiation in your body? It will happen, just as we are being scanned by wands to alert if any weapons are on us. If we continue poo pooing climate change and gun control laws can the same fate hit us as the three characters in Lucy Kirkwood's "The Children"?

Former nuclear scientists, /engineers’ husband and wife, Robin (Neil McDonald) and Hazel (Vanessa Dinning) are living in a small cottage on the British coast not far from a nuclear reactor where the inconceivable happened; a tsunami upended the reactor killing almost everything in its wake. It’s now six months after the disaster and they are dealing with the aftermath when they get a visit from an old friend and former colleague, Rose, (Catalina Maynard).

Playwright Lucy Kirkwood’s 2016 play is based on an actual happening. The event that served as the inspiration for the play was the 2011 earthquake and tsunami in The Fukushima Daiichi Nuclear Power Plant in Japan. Kirkwood moves the action to England where director Kim Strassburger and Dinning (whose accent comes natural coming from somewhere in UK) have the speech patterns down to a science. That’s the good news, bad news for these weary ears, aids and all. Yours truly had a few problems catching all the talk-over dialogue combined with the accents but surely, the point was not missed.

The play dishes out large quantities of what and how we prepare for future generations to survive/ live healthy lives/ grow to adults without major medical problems and how politics and the importance of environment control fit into the picture. The playwright pretty much doesn’t leave any stone unturned. With lots of after show talk, Kirkwood opens the door even wider for next gen to take action.

With about one hundred minutes of give and take in this no intermission production we see all three actors peel layers and layers of back and forth, give and take exposing who they really are. They are not just two dimensional characters. When Rose comes to ‘visit’ Hazel and Robin one gets the impression it’s a normal visit until we learn Hazel and Rose have not seen each other in over thirty years. It takes lots of dialogue before we learn the purpose of her visit. She’s just returned from the states and has a favor to ask both of them.

For the most part it’s friendly dialogue; catching up. They talk about children, Roses experiences in the states, etc. Rose has no children nor has she ever been married. When Robin comes in riding a tricycle, seemingly in a happy mood, the tension between Rose and Robin takes a while to drop to sea level by the time the truth of their relationship is revealed. Add McDonald’s Robin into the mix and this trio is headed down uncharted paths. McDonald is a study all unto himself. While assuming a cool veneer as he tries to soothe Hazel by taking care of her cows left at their farm by lying to her. He goes to the ranch  every day, according to her, to take care of them. Once again, more layers reveal just the opposite. But nothing gets by the affable and oft times impressive Hazel while she prepares salad for lunch.
Dinning’s Hazel is more than a keen observer, as nothing gets by her at once noticing that Rose is all too familiar with the setup of her house. They all act as if nothing is happening while the banter between the three cuts and bruises to the core talking over one another, ignore each other, blame each other and barely listen. Finally, Maynard’s Rose, who is about as up -tight as a drum compared to Dinning’s relaxed, yoga mother, who prefers healthy foods to the alternative, tells her former cohorts, why she’s there.
Simply put, she is reaching out to former employees of the reactor to go back and make it right, putting them all at risk. What to do? That is the question. There is the quandary, the Catch 22. Do we do what’s right for our children and their futures or do we serve our communities to the dangers they entail once again?

Director Kim Strassburger with assist from Sandy Campbell have put together a top notch trio of excellent actors to bring these questions to the fore.  Who you think you see see isn’t necessarily who is uncovered. As mentioned before, layer upon layer of what and who they are, is revealed by plays end and everyone’s entitled to their own opinion.

All three have their chance to shine throughout. Dinning, a natural pleasant, no nonsense mother hen is just what her part calls for; loving, caring, devoted and it looks like she makes one hell of a salad.

Catalina Maynard is perfect as the up tight former lover/ friend who can’t seem to find a comfortable space in her friend’s company. As for McDonald, bringing up the rear, Kirkwood’s play would be desperately missing an important piece. Beneath that concerned façade something malicious is at work.

For our future and our children's future, I highly recommend it.

Posted by Carol Davis at 1:59 PM No comments:

“Hamilton” Returns To Civic With More Bounce to The Ounce 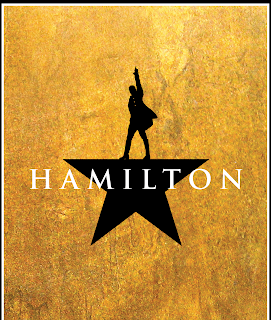 The last time “Hamilton”, Lin-Manuel Miranda’s ode to the first Sec. of the Treasury, was in San Diego at the Civic Theatre, was in 2018, only three years after it premiered on Broadway.
Then as now, the hip hoppin’, jazz, blues, rap centric, R&B mega hit “Hamilton, Winner of the Pulitzer Prize for Drama, and eleven Tony Awards including Best Musical, the life and times of Alexander Hamilton comes full circle for over two hours in Miranda’s historical unfolding of America’s beginnings.
This national tour of “Hamilton” through Nov. 30th with last minute changes in casting (due to Coved and other illnesses) almost or most of those performing on opening night were understudies. Did it make a difference? If you went with the flow of the audience reaction, the answer would be 'no'. If you ask moi, it could have been a stronger show as some of the voices were not up to par and the orchestra had a tendency to drown out some of the lyrics, which make up the backbone of the historical happenings.  Along with the amazing dancing under choreographer Andy Blankenbuehler, the entire cast performed “with more bounce to the ounce” and a youthful energy than I recall.
Inspired by the 2004 biography "Alexander Hamilton" by historian Ron Chernow, “Hamilton: An American Musical” with music, lyrics and book by Miranda, the story traces the life of one America’s Founding Fathers: Alexander Hamilton, statesman, Secretary of the Treasury, and author of economic policies under George Washington. His personal history was that of an immigrant from the Caribbean, born ‘out of wedlock’ and brought to New York as a teenager to pursue his education. He became a representative to the Congress of the Confederate and, his likeness appears on our U.S. $10.00 bill.
As his his back -story plays out in the musical. Miranda puts a new face on the young patriot who steadfastly pushed his way into the making of a country as a vulnerable patriot writing a majority of articles and or essays called the Federalist Papers defending the ratification to the U.S. Constitution.
With a cast as colorful (read multi ethnic), and somewhat as diverse as our founding fathers. Alexander Hamilton is played by Deaundré Woods (again understudy) and took on the role as a much younger and less pushy, but none -the -less, keeping up his rivalry with Aaron Burr. When he isn’t going face to face to face with his nemesis (“I’m Not Throwin' Away My Shot”) Burr, played with consistency by Ellis C Dawson III, he nailed it in a huge production number….”The Room Where It Happened”). He tests the waters by supporting the revolution to break away from the Mother -Land. And who shows up?  Monarch King George III, played with scrumptious wit and snooty arrogance by Alex Larson (“You’ll Be Back”). 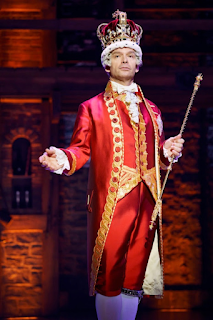 Even though the women in most bios of the founding fathers get short -changed, Hamilton was as much a romantic and a rogue that he almost threw away his marriage while engaging in an outside affair. Early on he met and married, the love of his life, one of the Schuyler Sisters, Angelica “I’ll never forget the first time I saw your face”,  (Charlotte Mary Wen”) who introduced him to her sister Eliza (Morgan Anita Wood) at the Winters Ball.
The women in his life played a large part in the outcome of  his home life and his wandering  eye, and Miranda, equal opportunity master that he is, gives the women some of the most compelling lyrics and music with which to express themselves. (“The Shuyler Sisters”, “Wrek”, “Helpless”, “Who Lives, Who Dies, Who Tells Your Story.”) 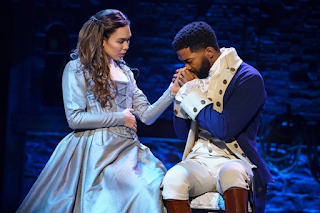 On the battlefield and in the planning of the revolution, Hamilton won the respect of George Washington (the full voiced Tré Frazier… “Right Hand Man”) much to the chagrin, consternation, and I might add jealousy of Burr. As long as Washington stayed in power, Hamilton was protected from his enemies.
The minute Washington stepped down after the battle and independence a reality, with the help of the Marquis de Lafayette (Paris Nix who also plays the dandy Thomas Jefferson to perfection), Hamilton was open game and Burr was clearly out to break the man. Unfortunately, Burr’s claim to fame was that he shot and killed Alexander Hamilton. (“It’s Quiet Uptown”).
Once again, the large cast with precision choreography is in a category by itself with some beautiful and muscle bound bodies making this spectacular another reason to be there.
With outstanding conducting by Julian Reeve’s, musical supervision and orchestrations by Alex Lacamoire, some too loud sound design by  Nevin Steinberg’s  yet deftly directed by Thomas Kail, outfitted by Paul Tazewell, and with Howell Binkley’s dazzling lighting, and David Korins scenic design, you might want to sign up for the lottery where tickets are about $10.00
Back door deals, political rivalries and back -stabbing never seem to end. Not then, not now.
Through Nov. 20
Organization: BroadwaySD.com
Production Type:  Musical
Where: San Diego Civic Theatre, 1100 Third Ave., San Diego
Ticket Prices: Prices Vary
Web: ticketmaster.com
Photo: Joan Marcus
Posted by Carol Davis at 3:03 PM No comments: