“She The People” by Second City Raises a Glass to Women 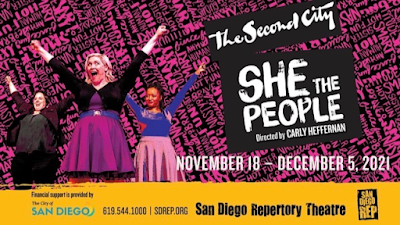 It was difficult to divide the opening night audience at the San Diego Rep. of “She The People” now on the Lyceum Stage through Dec. 5th as to what genders outnumbered what genders. Clearly the six women ensemble came to bury the male ego not to praise it. (All in fun of course).

The women in the audience along with a few good men (very few) clapped, yelled and ya hood and were all over each and every act the group performed from taking turns as a group, sanctifying and praising the progress women have made over the years and pointing out there are still miles to go,  mountains to climb and finally leading up to a strong monologue from the first Woman President (Kazi Jones).

The six women do what Second City has done since its inception in 1959 when the ‘comedy revolution/’began in Chicago; they make people laugh. It is comedy for women written by women. The show includes sketches, music and audience participation. One of my favorites, the game show “You Oughta Know’ where the chosen audience member, who was a good sport, couldn’t identify who the Sec. of State was but knew about the Kardashians.

Sketches include a number about anyone can have a  ‘gay baby’, women doing commercials demonstrating a shampoo under a waterfall tickled my funny bone and how women want men to look at their faces not their bodies so why not come out as a dinosaur and finally, but not the least last, championing for  having pockets in all women’s clothing.

With so much material to spoof and jab at and with the men in power still dictating what women can and cannot do with their bodies and the chances of women getting equal treatment like pay in the workplace, “She The People” will never run out of material.

And while the show was overly over the top, oft times crude and  funny as hell it is just what we need now. Some of the spoofs went fleeting by so fast that yours truly had a difficult time catching up with a few because some skits began while the audience was still laughing at the past skit.  My brain doesn’t work that fast. Sorry ladies, slow down a bit for the old fogies. But do enjoy the experience.

Some names you might recognize from Second City over the years include Tins Fay, Joan Rivers, Gilder Radner and Amy Sedaris. And yes, there were men in the group as well: John Belushi, John Carey, Martin Short, Alan Arkin and Dan Aykroyd to name a few.