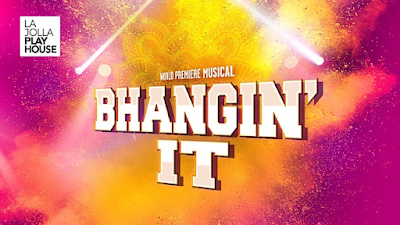 There is something about NEW that excites theatre goers. That was the case in the World Premiere Production of the Mike Lew and Rehana Lew Mirza (book), and Sam Willmott’s (music and lyrics) with additional music by Deep Singh, bhangin’ the new musical “Bhangin’ It” that opened March 20th at The Lolla Playhouse at the Mandell Weiss Theatre through April 17th.

With a company of no less than eighteen excellent performers, singers and dancers all, and with eighteen musical numbers, the story lines are less than inspiring, but the talent on stage makes up for the lack originality, as stories go. The use of the Punjab folk dance, bhangra, in particular is what motivates the narrative.

The story takes place in and around a fictitious college campus in East Lansing Michigan where Indian –American, Mary (San Diegan Ari Afsar) dances in the school’s official Bhangra (“a Punjabi folk dance that started as celebratory harvest dance”) dance troupe, The Tigres.  The team has been selected to dance in the national collegiate finals. Not satisfied with the direction that it is headed Mary wants to add a solo dance, Kathak (an Indian classical dance) to make the group more authentic looking.

Team leader Amit (Avaz Bilaal) and teammate Preeti (Vinithra Raj) are having none of it. They force Mary off the team.  Mary, with the help of her roommate Sunita (Jaya Josh) decides to form her own dance team with an ethnically diverse group of wanna be dancers, never been before dancers, and what the hay? joiners.  In the meantime, Mary has found a way to enable her rag tag group, the Wood Ducks, to also be in the final competition along with the T.I.G.R.E.S.

There are several locations (excellent visuals by Robert Brill) where the group assembles, practices and just hang out, such as a bowling alley, the girl’s dorm room, a rehearsal room, the Samosa Hut and  the kitchen of the Sampsa Hut owned by Rekha (Alka Nayyar ). There, a food fight happens between the Wood Ducks and The Tigres that pushes Rekah to force the students to clean up the mess and puts them to work in the kitchen more like team building than work or punishment.

In desperation to get the Ducks , er lined up, Mary ask Rekha to be The Ducks dancing coach.  No easy fete this since the makeup of the group, tho diversified, is nowhere ready for competition. The players include a basketball player (Terrance Johnson) to Billy (Brandon Contreras) sort of Mary's love interest, (“Toledo”, one of the more memorable songs sung by Mary and Jake), Constance (Laura Dadap), Noah (Henry Walter Greenberg), one of the faculty professors Wallace (Jason Heil), Jake (Terrance Johnson), and of course Mary and Sunita.


Need I have to say that the ending is as predictable as night follows day? BUT… there are endings and there are endings, sort of like the flashy ending in “Mama Mia”. So sit or stand but be prepared for some absolutely hip hoppin dancing, fun lovin’ Bollywood style dancing, ballet, and a  solo  performance with  choreographer Rujuta Vaidya playing a mean dohl (double sided barrel drum) that rocked the theatre.

While the post show was dazzling, it took over two and a half hours to get to the dazzle. And as impressive as it was yours truly would have been more satisfied to  see less of the almost unfinished story lines and more of the dancing and music. That said, no question that cultural diversity and finding your own identity made its mark.

Credits go to: costumes by Linda Cho are up to her always high standards. Musical director is Madiline Benson. Lighting design by Amith Chandrashaker, projection designer David Bengali, and sound designer Jonathan Deans. Lisa Shriver, musical staging; and Anushka Pushpala, bhangra specialist. Lest we forget director  Stafford Arima, who managed to pull it all together

"Bhangin' It" is new, bold, culturally diversified and bhangin’. With some major culling, it will probably be headed to the Great White Way.

Better yet, you be the judge.

COVID protocol: Proof of full vaccination required or negative COVID-19 PCR test result within 48 hours of performance, along with proof of ID. Masks required for all indoors. With new guidlines, howeveer, check before you go.