Get Thee To The Welk On Time

If you’re not humming “The Rain in Spain”, “On the Street Where You Live”, “Get Me To The Church On Time’, “Wouldn’t it be Loverly”, “With a Little Bit of Luck” or  “I Could Have Danced all Night” it’s because you haven’t been up to Welk Village to see the latest incarnation of the Lerner and Loewe classic “ My Fair Lady”.

Director Kathy Brombacher, former Moonlight artistic director and more recently appeared as Mrs. Higgins in the 2014 production of the Moonlight’s “My Fair Lady” is now directing this all time favorite.
The story aside Welk’s production is filled with some wonderful surprises. Lance Arthur Smith is a perfect new face added to the collective composite of Henry Higgins, the noted phonetician and boy genius at detecting accents and their place of origin.

Remember, he’s the one that bumps into the street urchin/flower girl Eliza Doolittle (Shaina Knox) who is selling her flowers while he is hailing a cab outside Covent Garden. It’s there that promises he can ‘cure’ her of her Cockney accent in six months and ‘pass her off as a Duchess”.
Taking him up on his promise Eliza shows up the next day at Higgins home promising she can pay for speech lessons so she can get off the streets and be an assistant at a proper flower shop.

Add to the mix Colonel Pickering (that gentle soul Ralph Johnson), his linguist friend who watches first hand the methods Higgins uses for ‘the cure’, Eliza Doolittle’s father, “ the recalcitrant Alfred Doolittle” (Randall Hickman), Higgins’ mother Mrs. Higgins (a hurricane force to be reckoned with M Susan Peck), the romantic interest Freddy Eynsford-Hill (Ben Williams) and Higgins’ maid Mrs. Pearce, (a built in role for Susan Boland) and you have an interesting blend of characters making this another highlight must see heading into 2017.

A talented ensemble includes a bevvy of maids, servants and street folk that change roles, dance, sing and bring this robust production to a satisfying conclusion that everyone lives happily ever after. Well…. (“I’ve Grown Accustomed to Her Face”). Choreographer Orlando Alexander gives the cast a bit of a workout.

The dynamic duo of Lerner and Loewe’s “My Fair Lady” based on G.B. Shaw’s “Pygmalion” hit the Broadway stages in 1956 and set a record for (then) the longest run of any major musical theatre production in history.

Shaw in his writings has never been accused of being ant-feminist but Lerner’s book and Loewe’s lyrics don’t really back that up. The way Higgins talks to and treats Eliza is one for the misogynistic books. If Smith’s Higgins weren’t such a twit with regards to Eliza, one might take a liking to him, but he shows too much disregard for women in general and Eliza in particular. “Why Can’t a Woman Be More Like a Man”?  Smith even sings well, something many including the original Rex Harrison did not do. He spoke the lyrics.

But Smith has something else going for him. As much as a boor as Higgins can be, Smith has a gentle, smooth and easy- going, easy flowing manner about him that pushes Eliza to the limits almost effortlessly.  His style isn’t quite as offensive as most, and as his slow coming to grips with his need for Eliza to be around him grows he becomes a bit more, not much, likeable.

Ralph Johnson just walks into the role of Colonel Pickering, a gentleman’s gentleman that he is (offstage) with ease and distinction. And he can still belt one out of the ballpark. “You Did It”,  “The Rain in Spain”.

Lets talk about Randall Hickman as Doolittle, shall we? Hickman is about as perfect in this role as he was Mama in “Hairspray”. With his gravely (a la Harvey Fierstein) voice, his bigger than life presence fills the stage in every sense of the word. “Get Me to the Church on Time”, “With a Little Bit of Luck”.

Shaina Knox had a bit of a problem on opening night being understood with her Cockney accent in our initial meeting with her but easily transitioned, after her many sessions with Higgins, into a beautifully spoken, well-mannered woman who could, yes easily pass herself off as a Duchess. And her voice; it soared. Brava! 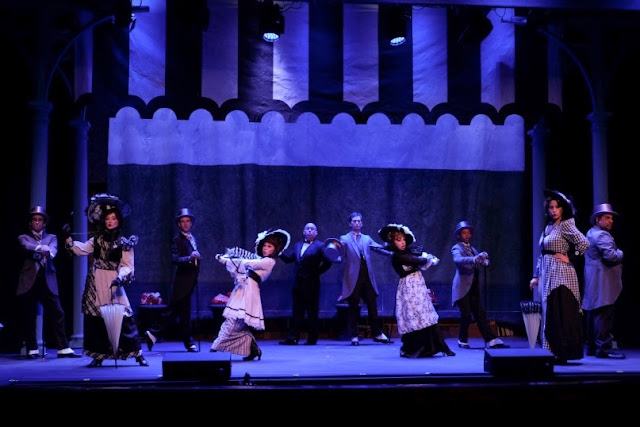 Always fun to watch “Ascot Gavotte” or a day at the races shows off the spiffy costumes arranged by Janet Pitcher. They are beautiful for the period especially those formal ones that always look so regal. Karen Scott’s wigs also help in pinpoint the time (London 1936).

The indoor sets look great and surely utilitarian but the backdrops look worn and weary. At times Justin Gray with his three musicians overpower the singers on stage. More than ever though I always have trouble with the sound coming from the pit; this is no exception.  Rest assure, Lerner and Loewe’s “My Fair Lady” is one of those classics that will be around for years. And yes, you should see this one.