“The Roommate” at SCR a bittersweet comedy of errors.

Some years after my husband passed away, I met a young woman in one of my classes looking to move from her ‘’old apartment’ to a ‘new place’. As an empty nester in every sense of the word, I offered a room in my house.

I was in my fifties she was younger and from my many conversations/interviews with her, she seemed on the level and had a good job. She was an assistant warden at the Federal Prison downtown… and no, she did not have a gun that she brought home (I did ask). That would have been a deal breaker. But she did have a piano that was never played in my house (just for the record) but I did make room for it.

It was pretty much a cut and dry deal. I thought the money from the rent she would give me would finance the many future trips I wanted to take.

It was an amenable arrangement. We were both workingwomen and our paths crossed mostly in the morning before she went to work and I went on my morning walk. She was home from her job before my classes ended in the evening. We chatted briefly and at best shared perhaps half dozen meals.  After about five or six months into our roommate situation, she got a job promotion in Long Beach and I was an empty nester again. Bada -boom!

Jen Silverman’s “The Roommate” directed by Martin Benson is now making its West Coast Premiere at South Coast Repertory Theatre through Jan 22nd.  This set of roommates isn’t quite as cut and dry as my ‘roommate’ experience. In fact she set the stage for some fun and games experiments yet left a bittersweet moment that had me wanting to know more.

Sharon lives in Iowa and Robyn is escaping….ooops resettling from the Bronx, to of all places…Iowa. Why, you might ask from the Bronx (“Isn’t the Bronx dangerous?”) to Iowa? Good question, although the answer is somewhat perplexing: “I lived in Iowa for three years in grad school…I knew I was going to write about Iowa”. (Silverman)

Playwright Silverman (who has yet to approach the bewitching old age of fifty) tries to answer that question and more in about 85 minutes or so. Her abbreviated approach to write such an essay on what she claims is a much overlooked segment of the population, or in her own words, “I wasn’t seeing roles in which older women who were total badasses”, does resonate truth. My one disagreement with the playwright is the overworked word, ‘older’. Fifty is the new thirty and would that I could revisit it again.

Sharon (Linda Gehringer) and Robyn (Tessa Auberjonois) have about as much in common as the fish that swim in the ocean have with the birds that fly the skies. Some exceptions however, both are looking for change, both have children (sight unseen) that undervalue their mother’s roles in their lives and both have secrets that will be revealed over the course of the play.

We first meet up with them when they are unloading boxes of Robyn’s stuff from her car to Sharon’s front porch (“Is your porch safe?” ”Do you lock your doors?”). It is here we find out that Robyn is a vegan, drinks Almond milk, smokes (oops Sharon forgot to ask about that) pot, writes slam poetry, was a potter who made voodoo looking dolls, her grandmother was from Iowa and she’s gay!

On the other side of the coin, Sharon belongs to a book club or reading group, is a mother, is a retired wife (her husband left her), has a little night -cap now and then as opposed to smoking medicinal herbs a la Robyn’s style and can't understand why her son never visits.

The good news for Sharon is that she is more accepting to try new things than Robyn. Into the play we catch the both of them sharing a joint, practicing a little con job on Sharon’s friends (you’ll have to see the play to get that one) and sharing adult children stories.

Sharon has more curiosity about Robyn than vice-versa, ergo she learns more about her roommate’s dark past than her roommate is willing to share simply by snooping around Robyn’s ‘things’.

The story takes some bizarre twists and turns, some believable -some off the wall especially Sharon’s willingness to go along and even embrace some of Robyn’s illegal activities, once she learns of them.

The good news is that both gals are up to the task. Gehringer has the ‘deer in the wilderness’ look most of the time, but with a mischief looking smile from ear to ear.  Auberjonois is cool, calm and collected, always willing to let her mate try something new to break open her closed down self.

Brian Gale’s lighting design is stunning bringing forth light from darkness into Sharon’s kitchen, Michael Roth designed the original music and soundscape and Angela Balogh Colin’s costumes define the character’s look to a tea; Sharon with mismatched skirt, blouse and sweater and tennis shoes and Robyn in jeans, earth shoes and flamboyant and colorful looking shirts. 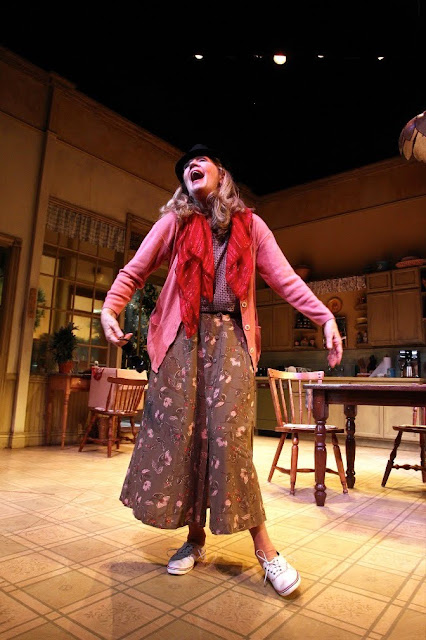 Both women do their best with the material given them. Both are able to bring out the humor, the unfulfilled dreams, the loneliness, the ‘other’ and the willingness to try to make it work for them. They also push the agenda forward that the playwright had in mind with an authenticity that comes along with the ideas. And there are some pretty decent ideas. For me though it was the distressing emptiness that left me sad, in some ways, to see it end as abruptly as it did.

Silverman has a point. The Golden Girls might just have been left out of the conversation had not she opened up the dialogue.

It’s worth a try.