Broadway Vista’s “Tuesdays With Morrie” Has Its Tissue Moments.

This octogenarian is still processing!

I found my self reading Albom’s book, “Tuesdays With Morrie” in the late 70's while flying from San Diego to Boston, the Cape and other east coast places of interest to revisit my roots once again.  Friends and I were traveling together and the two of us were reading the book. I was several rows in back of her.
on th plane.
The book is short and is based on Albom’s visits with his ailing Brandies University sociology professor, with whom he  had a special relationship. He caught Schwartz’s eye in class the very first day and student and teacher formed a bond that seemed special at the time.

After graduation they promised to keep in touch. Mitch went to live with his brother for a while and sought odd jobs as a musician, something Morrie encouraged him to do.

After Mitch’s brother died, he gave up his wanna be musical career, moved to Detroit and took a high-energy job as a sports journalist.

Morrie continued to teach; Mitch climbed the ladder of success and was now on radio commenting and calling professional games, interviewing famous sports characters, and just keeping busy so as to not miss out on any opportunity for advancement.

One night while surfing the web, Mitch happened to catch a segment of Ted Koppel’s “Nightline”. Koppel was interviewing Mitch’s old professor Morrie on the affects his ALS, which is a fatal illness medically known as amyotrophic lateral sclerosis or Lou Gehrig disease. The topic was how he, Morrie, kept himself above the fray with his positive thinking.

“How useful it would be to put a daily limit on self pity. Just a few tearful minutes then on with the day.”

Broadway Theatre has enlisted two seasoned actors to play the parts of Morrie and Mitch with Ralph Johnson as Morrie and Lance Arthur Smith as Mitch. Director Randall Hickman got the right combination of personalities to pull this emotional journey of a play, based on the book, off to a running start. It’s a powerful one-act play that will hit you in the gut at some point in the production.

Johnson is a natural as Morrie. He’s even -tempered, always pleasant with his usual smile in place and soft -spoken.  His face lights up when he talks of his love for dancing in the Harvard Square Church, long walks with friends, reading and sharing his outlook on life.

“Death ends a life not a relationship. All the love you created is still there. You live on- in the hearts of everyone you have touched and nurtured while you were here.” It’s Johnson personified. 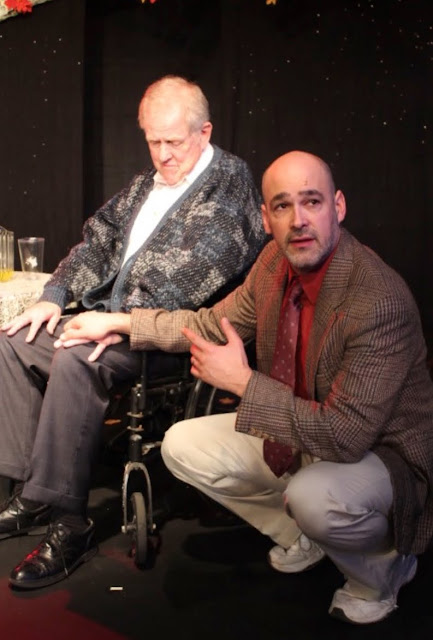 His subtle humor almost passes unnoticed but for the fact you will find yourself chuckling at some of his philosophy. “As you grow old, you learn more. If you stayed at twenty-two you’d always be as ignorant as you were at twenty-two.”

Mitch who speaks directly to the audience recalling the beginnings of their relationship filling us in on the backstory and of his relationship with professor Morrie Schwartz narrates the story. They talk about the world, self pity, regrets, death, ageing, the superficiality of fame and money, culture and forgiveness. In short they talk about everything important to Morrie as it might affect Mitch.

As Morrie’s health declines, Smith’s Albom’s grows in compassion and understanding. He slowly softens and gets on with program. He smiles often, brings Morrie his favorite egg salad sandwich, which we learn in the end he never eats because he now just drinks his meals and he looks more comfortable in Morrie's lovely back yard with overhanging Red Maple leaves in the background. (Randall Hickman)

Watching the two catching up on their lives develops slowly; the naturalness sets in as if the sixteen -year gap between the two never happened. Mitch’s visits start out cautiously as the relationship between old friends begins to reconnect. Mitch promises to come back again, Morrie pins him down to a specific time and both agree after some negotiations that Mitch will visit Morrie on Tuesdays. 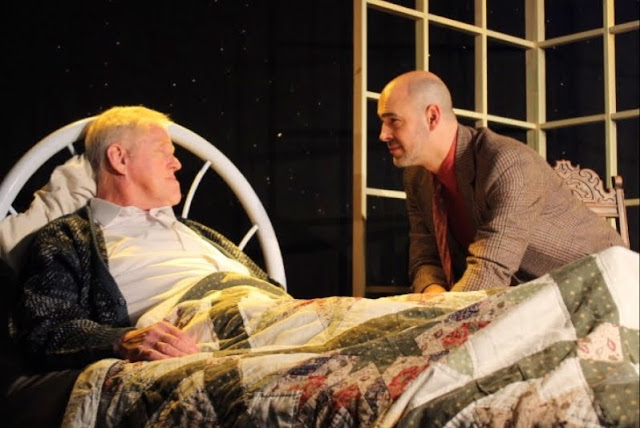 As they continue to meet Morrie looks for answers Mitch has yet to give him. He wants to know what makes Mitch run. He questions his lifestyle, if he has a family and more than once if he is at peace with himself.

As the sociology professor digs deep into Mitch’s soul, Mitch feels the stress of Morrie’s questions and is clearly uncomfortable with them. Looking back, Mitch is like a student once again, under the spell of Morrie’s wisdom. He calls it ‘Morris’s last class’.

When Morrie’s disease begins to take its toll, Mitch begins to soften to the idea that touching, a kiss on the forehead and showing affection isn’t such a bad thing after all.

When Morrie needs Mitch more and more for personal help, Mitch is right there. Smith, as well makes the pivot from standoffish to sincere care to a natural caregiver, if you will, something he could never do for his own brother.

While the play moves to its natural conclusion, the chemistry between the two deepens and what looks to be a father-son relationship with subtle and somber nuances that one barely notices, becomes a reality. In one of Morrie's more reflective moments he confesses that if he had a son, he would want him to be MItch.

And through it all, the good professor never loses his sense of humor, pride, intelligence, inner peace, ability to engage in philosophical discussions, or high sense of morality.  Over time each send-off is coupled with a hug.

With the passing of time and each Tuesday brought Morrie closer to death, the reality of the reality sets in - that’s exactly the time my friend came to me at my seat, book in hand, and we both wept without saying a word.

It’s was a good cry then, and recently at the Playhouse tears came uninvited but they came because living is hard and making it the best we can each day is a challenge, yet we keep on truckin’. It’s ours to make; be it positive or a drag.

Hats off to Broadway Theatre and Randall Hickman’s easy direction. Doug and Randall are a two man do it all, be it all, make it all combo. And in doing so, keep the theatre alive in Vista.