“I Am My Own Wife”: John Tufts Bewitches As Charlotte von Mahlsdorf.

“I need to believe in her stories as much as she does. That Lothar Berfelde navigated a path between the two most repressive regimes the Western World has ever known - the Nazis and the Communists - in a pair of heels.”(Doug Wright)

“I Am My Own Wife” by Douglas Wright, work-shopped and finalized at the first La Jolla Playhouses Page to Stage program in 2001 is in excellent hands at the Laguna Playhouse with John Tufts as Charlotte von Mahlsdorf.

Jefferson May, whose star rose condiderably, took the show to New York and ultimately returned to La Jolla with a Tony in hand for his outstanding performance. It also won the Pulitzer Prize for Best Play and it is now in a mesmerizing production directed by Jenny Sullivan.

Nimble actor John Tufts takes us on the same journey that Lothar Berfelde, aka, Charlotte von Mahlsdorf’s life took when he discovered at an early age that he was a transvestite who openly dressed as a woman and, lived through and survived the Nazi and Soviet Regimes during and after WWII.
Born in 1928 Berlin Lothar was forced by his abusive father, already a Nazi, to join Hitler’s Youth Movement. Later she weathered her parent’s divorce and after her mother took the children to East Prussia she met and was was influenced by her lesbian aunt who encouraged her to be herself.

Some time later she went back to Berlin to help her father, but being the bastard that he was, he attacked her and locked her in her room. As a collector, she always carried a ring of miscellaneous keys in her pocket. That allowed her to leave the room where, as the story goes, it was either she or her father. She killed him in self -defense and was sentenced to four years in prison. With luck on her side the war came to and end and she managed to walk away from the prison.
Based on a series of interviews and letters playwright Doug Wright had with Charlotte while he was in Berlin, 1993 covering the demise of the Berlin Wall, the story of a life of creativity, survival, humor, espionage and even reluctant informant for the Stasi against her friends and family more for survival than allegiance, comes full circle.

“I thought if they shoot me, what’s the difference between a boy and a girl, because dead is dead!”

Dressed in a simple black dress (Keith Mitchell) with a double strand of pearls around his neck, a babushka on his head and clunky black shoes and stockings, Tufts takes on the persona of Charlotte (as well as 25 others) in a one- man tour de force performance second to none.
Under Sullivan’s astute direction and surrounded by Keith Mitchell’s  (set designer) collection of old gramophones, phonographs, record players, clocks of various sizes and shapes, old furniture lining the walls and suspended from the rafters, and with Pablo Santiago’s on spot lighting design, Warren Casey’s pros, Christopher Moscatiellosoun accurate sounds, not to mention… projections on a chalkboard in the background the visuals are overwhelming.

We first meet our lady in waiting as she carefully peeks through the door of her museum before she greets us. When she does emerge she is cradling an antique ‘Thomas Alva Edison’s invention’, the 1887 phonograph the worlds first, in her arms. She carefully sets it on a small table. In the background hanging on the wall is a framed painting of the Edison phonograph with the dog, Nipper, ‘ears cocked” to listen into the long horn.

Charlotte begins by giving us a history of the gramophone recalling how he, Lothar, loved to listen to his records on the gramophone when he was a child. Having developed a fascination with the machines, he began his collections along with all sorts of antiques, which he later turned into a museum and also won him/her the ‘medal of honor’ by the East German communist government for the preservation of German antiques.

“The day I received the medal was for me recognition of my work, and I thought It’s good, because other people see that a transvestite can work. A transvestite becomes such a medal.”

Tufts’ beautifully nuanced performance captivates with just the right combination of moves to tell Charlotte’s story. Every time he speaks in Charlotte’s voice, (he is also 35 other characters including Doug Wright himself) he touches his hand to the double string of pearls, he moves at angles and faces the audience in his other voices. He is fascinating to watch and has found her voice in such telling ways that it is impossible to take you eyes off of him.
Aside from the fact that Tufts performance is so breathtaking, you will find Charlotte’s life equally gripping as she transitions from character to character with as much as a hand movement, a nod, a um, yes? ja? a look, a wave, smoothing her dress, or just simply looking straight out into the audience.
At 40 years old her mother said to her, “Lottchen, it’s all very well to play dress-up. But now you’ve grown into a man. When will you marry?” And I said to her “My dear Mutti, I am my own wife.”

“I Am My Own Wife” continues through Jan 28th on the Laguna Stage (the 4th show in the Laguna Playhouse 97th season).

For yours truly, it was a trip down memory lane having seen it before, but confess that I had to catch up on so much forgotten material that I almost didn’t remember what it was like for the ‘other’ to live through under Hitler and Russian regimes.  “Like the Jews, we were fair game.” 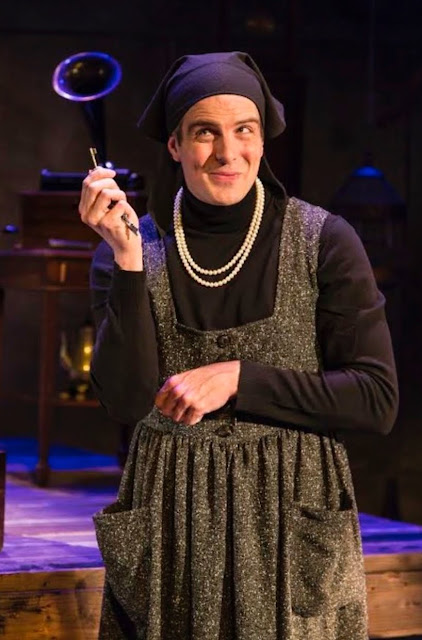 She eventually moved to Sweden, but returned to her museum in Berlin every five years. While at the museum, Charlotte died of a heart attack at the age of 74. The story of her life premiered off- Broadway one year later in 2004.

Hers is a history worth repeating.

“I Am My Own Wife” continues through Jan 28th on the Laguna Stage and is the 4th show in the Laguna Playhouse 97th season.