“Hedwig and The Angry Inch” Returns With Top Notch Cast

All this fuss about “Hedwig”, one might think he’s special. Oh, that's right, he is. He is a she with some of his he left on his body. Ergo, “Hedwig And The Angry Inch”. (“The Angry Inch”)

It’s also the name of  ‘The Angry Inch Band” appearing on stage throughout starring Patrick Marion Music director and on keyboard, Jim Mooney on Guitar, Linda Libby (who was in the original Cygnet production), on Bass, and David Rumley on Drums.

With text by John Cameron Mitchell and music and lyrics by Steven Trask, local references and outstanding performance, it's a must see. Making his San Diego debut Jeremy Wilson (a gender non-binary recent NY transplant) is mesmerizing as Hedwig, and Cashae Monya, Hedwig’s frustrated sidekick and drag queen, Yitzhak, the production speeds along at a rapid 90 or so minutes by my calculations.

In 1998 the original production of “Hedwig And The Angry Inch” started in small houses Off- Broadway. It won the Obie Award and Outer Critics Circle Award for Best Off-Broadway Musical. In 2014 the show was remounted taking away a prized coveted Tony for Best Revival of a Musical.

In 2016 it landed at the Civic in a very loud (which it is) and too big, too much superfluous and detracting ‘stuff’ cluttering the stage, the production proved to be just mediocre.  Enter Cygnet Theatre, new on the San Diego scene in 2016, at the home where the now Moxie Theatre resides in comparison, mounted it just where it needed to be in a small venue.

Fast forward a few years and on its twentieth anniversary, and Executive Artistic Director, Matt Morrow has the just the right space and audience for this high-energy musical journey about a sensitive young boy, Hansel Schmidt born in East Germany who longs to be a rock star. He will be rockin' at Diversionary, through May 5th.

Hansel is in search of his other half (“Origin of Love”), someone he can bond with- a true love. Abandoned by his father and left on his own by his domineering mother he meets an American soldier, Luther Robinson, who promises to take the boy to the states.

There’s a big IF, however. In order for Hansel to make the crossing from East Berlin to West Berlin he must become a she! In a nutshell, the operation is botched during the sex change and the instead of having a vagina, a one inch surgically stitched mound of flesh is the only remaining sex organ Hedwig has to his name.

Once in the states, Junction City, Iowa to be exact, Luther abandons Hansel and he is left to fend for himself working small gigs with his band when she/he meets young Tommy Gnosis another musician who will later go on to become a great rock star. 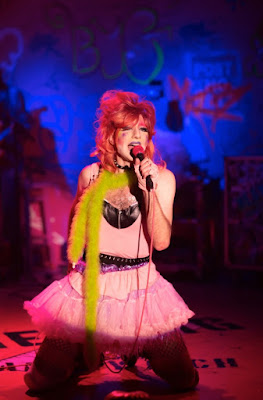 Most of what they worked on together made Tommy the talk of the town leaving Hedwig only to stand in his shadow. Bring in the frustration and admiration Hedwig deals with the boy he befriended, idolized and collaborated with in music and lyrics at the beginning of their relationship and you have one more than irritated rock performer.

Throughout Tommy is much more successful than Hedwig and we know this because we hear the crowds roaring from a venue across the street when he pushes open revolving door on the side of his small space bringing in sounds of cheers and applause from across the way.

Unfortunately I couldn’t understand most of the lyrics; they were too loud for these tender ears but the over the top vibes from the Angry Inch Band, Hedwig’s creation, was more than appreciated by the audience.

The story of his life, his struggles, in this, his musical journey continued to the bitter end when Hedwig, regarded as queergender, deconstructs himself (“Hedwig’s Lament”/Exquisite Corpse”), takes off his wig and gives it to Yitzhak (a gifted Cashae Monya as usual at the top of her game) his depressed man/woman sidekick who aches to be a woman. (“Midnight Radio”).

Finally Yitzhak returns to the stage all decked out in a glimmering gown (Elisa Benzoni) and belts out her song to an amazed audience. The two dance then Hedwig, set free by Yitzhak, leaves the stage and exits ‘with the grace of new hope.”

By plays end, “Hedwig” is off to a smarter and more contemporary new look after all these years. Gender bending is no big deal, drag is here to stay and Queer is woven into the every day vernacular. Yet political finger pointing is still at an all time high. The good news: a gay mayor is running for president. Now if we could just pronounce his name.
Can't say it enough, Ms. Monya and Mr. Wilson bring a sincere and purely unadulterated performance worthy of past excellent productions seen recently at Diversionary.

("She's more than a woman or a man," Mitchell is quoted as saying, "She's a gender of one and that is accidentally so beautiful."