Last year San Diego Repertory Theatre staged the premiere of Qui Nguyen’s “Vietgone”. At that time I remarked that it was a love story, a war story, as far as we know a true story and an original. It was an eye opener for those opposed to the war.

Qui’s story began in 1975 at the end of the Vietnam War and traveled back in time from the evacuation of Saigon by helicopter pilot Quang to the USS Midway and then to a resettlement camp in Fort Chaffee, Arkansas.

Quang, who was familiar with our landscape (he was trained here in San Diego) along with his friend Nhan, planned to bike it from Arkansas to Camp Pendleton and then Quang would hop a plane to Guam to and then fly back to Vietnam (undercover) and reunite with his family, a wife and two children, left behind in the confusion of boarding the last helicopter out of Saigon.

At at the camp he hooks up with Huong who has no qualms about having a few tumbles in bed, bunk or on floor with Quang, but is not ready for a serious romance. She is hell bent on assimilating. Houng and her mother Tong, who are both in the camps, are at opposite ends of the spectrum of what they want in their new lives in a new country.

Tong wants to keep her Vietnamese identity and doesn’t understand her daughter’s need to assimilate. Huong is ready for real new beginnings; dresses, speaks, and acts American and develops well...attitude.

Fast -forward to 1981and 30 -year old playwright Qui Nguyen (played by Paco Tolson), finally admits that this new story, as was the other is about his parents and family and where they all are in scheme of things. “No one wants to hear a story about an old woman who speaks bad English with a fat son.”

Getting the story off the ground  “Poor Yella Rednecks” he uses the same synergy in his telling of “Vietgone” story; he is interviewing his mother, who is now 70.

In “Vietgone” he was interviewing his father for his account of his memories in the war.  Now in the sequel to “Vietgone” they are in their family home in El-Dorado, Arkansas: “I’m interviewing you for a play that I’m writing.” First reaction from Mom: “Bad idea!”/”Terrible story.” But in agreeing she adds, “It must be true.”

And we are off to the races.

In 2015 South Coast Repertory Theatre in association with Manhattan Theatre Club presented the world premiere if “Vietgone”. Qui was then quoted as saying, “It took me about 15 years to be brave enough to take a chance with story about my family, I wanted to tell a culturally relevant story, but also irreverent and funny story.”

Now back to its roots in Costa Mesa, and in another world premiere production through April 27th,  “Rednecks” deftly directed by May Adrales, with the full throttled involvement of the entire crew/ensemble, the production moves along to the sounds of rap, contemporary pop, and doesn’t skimp on sentiment, humor and emotional pain.

We look in on Tong, who is babysitting her grandson, Little Man, (the Playwright, played by an adorable life sized puppet and moved by Eugene Young and Paco Tolson with Toung’s voice as the child’s), while Huong is working her job as a waitress on the late shift. Tong has no use for her son in law Quang (Tim Chiou)as she thinks him is a wastrel.

As the cautious grandmother, learning well from the war, she is overly prtective of her grsndson. She takes care of him, makes his lunches, gets him off to school and puts him to bed. She reads to him and in every sense is a mother figure. She is as authentic as one might ask.

The relationship betwen Huong and Quang was not made in heaven, but it was working as well as could be expected. Things go from bad to worse in the relationship between the two when a letter from Quang’s ‘wife’ (the one he left behind) arrives with an immigration visit with demands from her. That and the fact that he is most likely a bigamist puts fear into the minds of the couple and they hastily get the marriage annuled.

Quang unilaterally decides, in an overly guilt ridden surge, to send all the family savings to the wife and children he left behind, putting his now family, and what little glue was holding it together, at risk.

With unusual speed, and the usual who shot John finger pointing, the couple separate, get that annulment and each has a great turn at showing how difficult life is in America as immigrants, a single parent out of a job, not that it wasn’t before, but together it seemed easier.

She does a shtick as a martial arts champion in the supermarket when she is caught stealing food.  She also tries to renew her old relationship with Bobby (Paco Toloson) , who is a hoot as one clumsy mate who has no idea about relationships and how they work.

He has a one night stand, we thing only one night, when he and Nhan head off to a neighboring town looking for work. Of course he didn't want to be unfaithful, but oh well. When he finally does come home he nees differrent address.
Making the production as successful as it is with all the ingredients for top- notch entertainment must be credited to a talented and focused cast with Chiou and Quan who sizzle together and man, it looks for real. Both seasoned actors they look good together, fit well together and are convincing all the way home.

Sebastian is a riot as the irresistible yet interfering mother/grandmother who cannot fathom sending her grandson to be tutored in English so he can communicate with his peers in school.

This exchange with Huong nearly broke my heart:  “They recommend we stop speaking Vietnamese at home. Only English.” “How will I be able to talk to him?” “I’m his grandma. But what happens when he learns English so well that he doesn’t think in Vietnamese anymore?”…”What happens when his insides no longer match mine?”…What happens when he looks at me the same way the people her look at me like I’m less?” “Like I’m invisible. I’m supposed to turn him into a stranger just so he can do well in school?”  …”You want me to turn him white.”

Five excellent actors, most from the original production play several different parts most transitioning well as they dance they rap and move easily and persuasively on Arnulfo Malonado’s sparse and moveable set. I found most of the rap as it ‘functions in a more transitional musical way moving the story forward entertaining with a “Hamilton” connection.

Valerie Therese Bart’s costume design, Lap Chi Chu’s effective lighting, Shane Rettig’s original music and Jared Mezzocchi’s comic book projections all come together to make beautiful theatre. I would be remiss if I didn’t mention Sean Cawelti, puppet design/direction that brought ‘Little Man’ to life.
If you loved “Vietgone” you will love this next installment of Qui Ngyun’s life’s story of survival and love as immigrants in a society that would just as soon send them back to their place of birth than let them assimilate while keeping their culture alive.

I can hardly wait for the next installment. ‘Little Man’? 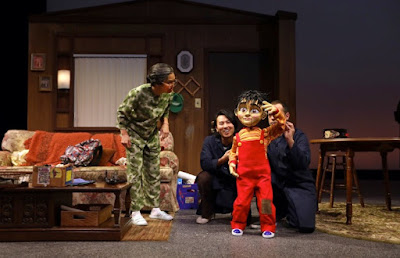