Romance comes in many colors. But when it comes from out of the blue, words can’t define it. So was the case of Mike and Will’s (Michael Louis Cusimano and Shaun Tuazon) budding, but not so fast growing relationship in “Girlfriend” by Todd Almond (Book) and Matthew Sweet (Music and Lyrics) now playing at Diversionary Theatre through Oct.13th.

Words are not the engine that propels Mike and Will’s togetherness in Almond’s “Girlfriend”. Few words are exchanged between them but there is an energy that stokes the romance, and that energy is in Matt Sweet’s music.
From the get-go, when Mike gives Will a mix-tape of Sweet’s music with “Girlfriend” on it, and both are playing it in their respective bedrooms at the same time, one might say, ‘it was b’shert.

It’s 1993, Alliance, Nebraska. Mike and Will are in a celebratory mood. They just graduated from high school. Will empties his backpack of school books into a trash can in his bedroom. “Today is New Years Day”.

Mike is at his bedroom doing the same, but his ‘stuff’ is packed away in a box. Both hold up a copy of their own mix-tape and begin to play it on their CD and stereo’s.

At some point in the evening Mike reveals that he has a girlfriend in another town.  That sort of changes the dynamic, but how can you take someone serious who, in earnest, tells you his girlfriend has long and thin-  like a spider arms? That was one giggle moment, watching Will shake his own arms.

Trying to get a tentative commitment from Mike and or Will on how or if they care for each other on a mutual playing field of a few dates, is like pulling teeth. In fact, they barely speak. They do share a secret eye kinetic language that, for them speaks volumes.

But the biggest tell all is when savvy musical director Kyrsten Hafso-Koppman and her band begin to play Sweet’s music. That’s the seriousness of the evening. When the two break out in song, about 10 in all, the musical play comes alive.

The two embrace, sleep together, are unencumbered by any restrictions of other’s around them, and dance rhythmically to the music. The kiss is the frosting on the cake.
The lyrics tell the story; the acting brings out the best of both men. The production under the direction of Stephen Brotebeck rocks in a way that couldn’t have been predicted from the start. That’s also what makes the playful and tender moments in “Girlfriend” worth the wait to see what and if anything comes of this ‘primer to romance’ a lasting and viable affair.

The music speaks volumes: “I’ve Been Waiting, “Reaching Out”, “Looking At The Sun”, “Girlfriend”, We’re the Same”, “I Wanted To Tell You”.  The four piece band led by Hafso-Koppman on keys (and harmonizes with the men on occasion) include Melanie Medina… guitar, Nobuko Kemmotsu …drums and Christian Reeves … bass is perfect in the small Diversionary space.

As the scenes pivot back and forth between the drive in, their respective bedrooms and an open field (credit Yi-Chien Lee for the simple but functioning set of moveable cubes and furniture) where they occasionally meet, most of the disclosure of the personalities is revealed. Mike is on his way to college to follow in his father’s footsteps of being a doctor.

Will doesn’t have college in his future. In fact, contrary to Mike, Will had no future plans. Tuazon (pardon me) is his absolutely adorable and comfortable in his this is who I am, self. It’s a role made for him. 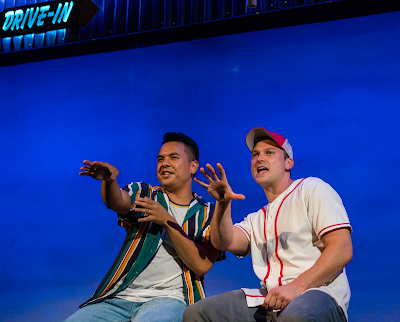 Mike’s a star baseball jock admired by most, yet under suspicion by some of being gay, and yes and bullied for it. Will is openly gay and more of a free spirit held in awe by Mike’s commitment to a future laid out for him by his own father. Cusimano is just tentative enough to see him trying to fit into his almost newly found freedom as an out of the closet gay man.

The back and forth of finally saying goodbye when Mike goes off to college as Will stays behind is a revealing moment. It’s like watching a game of Ping-Pong and the score is slightly favored on one’s side and the other is playing catch-up.

And if catching up means they catch up with each other in a disco on New Years Eve, with bright lights and disco music blaring (Curtis Mueller and Stephen Jensen) so be it. 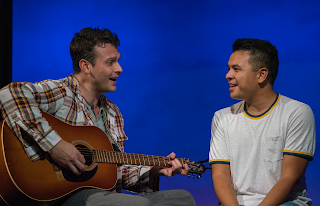 We learn that Will has a job at Kmart but came to hear this Band in Lincoln, Neb. Mike is on Spring Break, also there to hear the Band (“I Wanted To Tell You”). They look at each other, ‘still uncertain of how they feel’ and once again begin their dance. So let the magic begin and… “If music be the food of love, play on.”