SDO “LA BOHÈME: “SOMETHING TO BRAG ABOUT IN THE YEAR OF COVID.

It’s been years since I’ve been to a drive in of any kind, and I’ve been around long enough to remember drive in restaurants where the servers were in roller skates. If that’s hard to imagine, imagine a drive in opera. It’s not so farfetched in the year of Covid 19 but it, in a way, farfetched as well. With theatres dark and with the exception of those creative enough to figure out ways to film and stream one or two person plays, the prospects of seeing live performances is almost unheard of …until now.

Enter the bold and courageous San Diego Opera. For all intents and purposes and because of the restrictions and health standards, the opera would not begin to have a season. The Met. is shuttered as are most opera houses around the world. At the beginning of the pandemic, yours truly was watching operas from the past that were recorded for history. This held my interest for several months until they started repeating them.

No more! Believe it or not, we here in San Diego are able to see Puccini’s gorgeous “La bohème” in the comfort of our cars in the parking lot of the one-time Sports Arena parking lot now Pechanga Arena. It was made possible by generous donors and the inspired mind of General Director David Bennett. 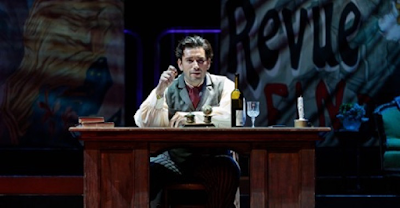 Reimaged as a memory play instead of in the moment, Rodolfo finds himself ‘reflecting on a bittersweet moment’ ten years earlier of his first meeting with Mimi and the story of the beginning of their love affair and its tragic ending.

Making her company debut as Mimi, is the lovely Ana María Martínez who replaced Angel Joy Blue (health reasons) and did it in a way that won the hearts and minds of those who love a beautiful love story. The vulnerable and sickly Mimi (Martìnez) never disappointed living up to her vocal challenges especially when in duets with Guerrero. Her “Si. Mi chiamano Mimi”  telling Rodolfo about herself sets the tone for some stunning singing.

Her poet lover Rodolfo, tenor Joshua Guerrero, is excellent, and that was immediately apparent in his tender aria “Che gelida manina” in Act I when they first meet. The two are a perfect match vocally. 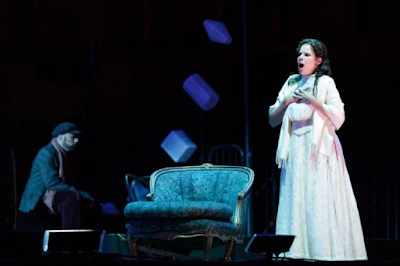 Robert Mellon in background, with Ana Maria Martinez as Mimi

There are lighter times however when Soprano Andrea Carrol’s Musetta comes to the outdoor celebrations in the Latin Quarter with her rich sponsor, Alcindoro, bass baritone Scott Sikon. Left holding the dinner check and looking completely baffled, she taunts her ex-lover painter Marcello (Baritone Alexander Birch Elliot) in her centerpiece aria, “Quando m’en vo" about her popularity. Bass Collin Ramsey, and baritone Robert Mellon’s Schaunard along with Rodolfo round out the roommate trio. Both Mellon and Ramsey have more to do in a full length rendition, but the entire cast was more than up to the task the night I attended. 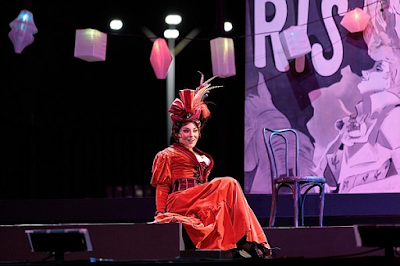 Andrea Carrol's Musetta
The entire production lasts about ninety minutes without intermission. Rynne’s crisp sound design was heard  by tuning into the car's FM radio. There are sufficient screens placed strategically around the parking lot allowing  anyone and then some, not close enough to the stage, to be able to watch mostly everything on a super large TV screen with Supertitles.

The one drawback was that, while we could see and hear each of the performers singing one or two at a time, we were not able to see the entire cast on stage; a small price to pay to see live performances at this time when everything else we see is filmed and streamed.

The changes in the format of Puccini’s  "La bohéme” under Director Keturah Stickann was a necessity especially in the time of Covid, safety protocols, and social distancing on stage. The lack of chorus and keeping a distance of 15 feet of each other with each singer having four feet on either side worked just fine. In a way, while the distancing could have thrown an emotional wrench into the passionate feelings, it never felt less than passionate. In fact, so strong were the voices and so avid the feelings, honking (instead of clapping) to the cacophony of car horns was quite novel. 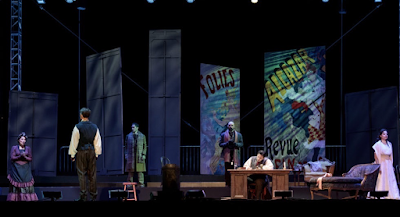 Cast of La Boheme
But in the times of a major pandemic, we have to give a shout out to the San Diego Opera Company for this big boost to the arts our and
our well being.
There is nothing like a good cry at the end in the privacy and darkness of your own car and your own bubble. Sigh.

It will be shown again on October 30th and November 1st. Do enjoy!