ROUSTABOUTS RAISES ITS POLITICAL VOICE ONCE AGAIN IN “CHARGE THE BEAR”

The dynamic duo of Freedman and Johnson are at it again. If you recall the two tackled the Hollywood Blacklist fiasco of the 50’s in a one man show, “A Jewish Joke” starring Johnson as Bernie Lutz, funnyman, writer, comic and actor.

In this ‘bitter comedy’ Lutz came under the evil eye of Joe McCarthy’s House Committee on Un American activities whose one purpose was to ‘out’ anyone in the entertainment industry (read Blacklist) that had any connections, past or present, to the Communist Party, causing them to lose their jobs and taint their reputations putting them out of their work. Most of the targets were Jewish entertainers including directors, actors, writers and performers.

The duo is at it again with another solo show starring Johnson in “Roosevelt-Charge the Bear”. It’s another look into American  politics but this time it’s about founder of the ‘Bull Moose’ Party, Teddy-Theodore Roosevelt whose rise to the presidency came as much of  a surprise as well as chagrin to him as it did the Republican Party after the assassination of President McKinley. 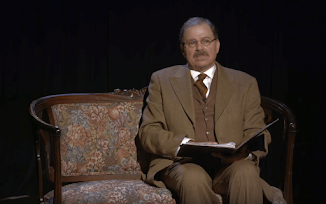 Curiously, after watching all of Ken Burn’s five or six part series on the Roosevelt’s I came away with little memory of his accomplishments as the 26th.  President of the United States.  With the exception of (and no easy fete) his being a conservationist, historian, naturalist and explorer, he will be remembered by his 1898 organization of the Rough Riders, the first volunteer cavalry in the Spanish American War. They were best remembered for their charge up San Juan Hill in 1898 years before he became president.  His likeness is also carved on Mount Rushmore along with Thomas Jefferson, Abraham Lincoln and George Washington.

At the ripe old age of 43 he was then the youngest President in the nation’s history. He brought with him a more progressive agenda than the traditional Republican mantra claiming that the President is the “steward of the people” and should take whatever action necessary for the public good. Nothing could have prepared him for the fight the established Republican party would give him as he struggled to settle the eastern Pennsylvania coal miner’s strike of 1902. He tried bringing together mine owners, money men like Carnegie, and Rockefeller to the United Mine Workers of America and the miners to negotiate for better housing, higher wages and safer working conditions 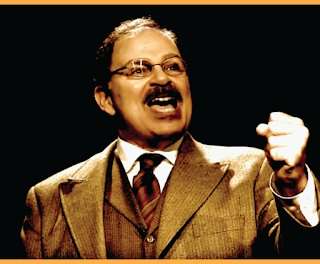 He hones in on a letter he received from a young boy (13 years old) whose brother who is nine and working in the mines and already is sick from the fumes he inhaled He carries the letter around to remind himself of what’s happening in the real world outside of politics as he travels the country by train from Bangor, Maine to Burlington, Vermont to Providence, Rhode Island and beyond reaching out and meeting those waiting to see him.

In this exciting world premiere, Marni Freedman and Phil Johnson along with actor/ director Rosina Reynolds have given us a clear picture of the 26th President’s, early into his presidency one of the biggest challenges of his career: solving or putting an end to the coal miner’s strike. When he learns that one hundred and forty thousand men are on strike including the firemen, engineers and pump men it’s difficult for him to fathom that there will be no heat, and American’s would “die in the streets, to literally freeze to death in their own homes.” ‘And the party and money men wanted me to sit down and shut my mouth."

The play pivots back and forth in and around other locations but for most of part Johnson’s Roosevelt is either sitting behind his desk in the oval office (Tony Cucuzzella) or walking around it, or sitting at its edge, getting a shave and/or talking to reporters or talking about taking a hike with reporters.  He valued the opinions of the reporters to keep him on track and tell the truth. 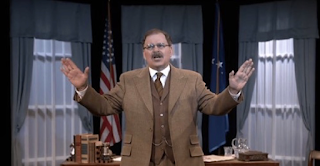 The conversations give background into his inner thinking about the job he was thrown into, the few ally’s he thought he had inside the Republican party (Senator Mark Hanna, “Now that damn cowboy is president.” ) but really never had, to the deaths of both his mother and first wife coming hours apart, to his enthusiasm about building the Panama Canal; about his sisters disability from a spinal condition and how he encouraged  science and medicine to work together to help all those with physical disabilities by making less cumbersome braces (not to mock them as our current leader does).

In a reflective moment he reminisces about the time he invited his friend Booker T. Washington to dine at the White House. Later in response to the invitation from the senator of South Carolina, senator Tillman “we shall have to kill a thousand of them to get them back in their places”. I can hear Lindsay Graham referring to Jim Crow laws as the ‘Good Old Days’. Not much has changed in the Republican party or South Carolina.

Johnson, who acts  as Artistic Director and a pro at heart, does throw his heart and soul into giving the audiences a clear picture of another man of history whose heart and soul were definitely for the American people. From his early days as his time as a conservationist to the story of his stalking ‘The Bear’ to’ hunting the bear’ to admitting that he was ready to ‘charge ‘the bear (intervene in the strike), his is a performance well worth remembering. It carries with it the utmost sincerity, confidence and genuine belief in his character. Presidential is a good word. For ninety minutes his presidential posture never falters as he transforms himself to become Roosevelt.

As the other dynamic duo of director Reynolds and actor Johnson this show is flawless, inviting and engaging and definitely worth watching, perhaps more than once as the character of Roosevelt the man is in such stark contrast to the one sitting in the White House now its mind boggling. The comparison is a lesson in humanity/humility for all who cherish our democracy and  miss right now!

The making of a production (i.e. filmed staging)  during the time of a pandemic involves the work of many behind the scenes technicians from stage manager Jassmyn Foster, to costume designer Jordyn  Smyley (period clothes perfect) to assistant Costume Designer Ross Stewart, to Lghting Designer Joel Britt to Sound  Designer Matt Lescault-Wood to Director of Photography/Editor Michael Brueggmyer and last but not least Daren Scott’s wonderful photos of Roosevelt the man looking very presidential.

The show runs through Nov. 2nd