Delicious Combination of Acting, Directing and Playwriting Give NCR’S “Dr. Glas” A Tasty Morsel of Intrigue, Morality and Mystery.

When you start thinking about a play you’ve seen for days on end, you might consider seeing more than once. Through the technology of streaming (a new phenomenon during Covid) it’s possible to go back and watch a play more than once sans an audience. None-the -less however it does have its advantages and North Coast Repertory Theatre has become a prime example of doing an exemplary job at it perfecting this type of filmed streaming. It is its eighth of this type.

“Dr. Glas” is a short story by Hjalmar Söderberg published in 1905 in Stockholm, Sweden, where it was immediately condemned. And why not? It deals with abortion, women’s rights, and male dominance, infidelity, sexual perversity and murder. 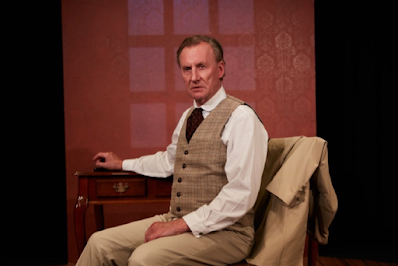 With the winning combination of playwright Jeffrey Hatcher (“Tuesdays With Morrie”, “The Turn of the Screw”, “Compleat Female Beauty” and a host of others), director David Ellenstein and celebrated actor Daniel Gerroll giving a tour de force performance as Dr. Glas, mark your calendars as a must see.

Gerroll, after reading the book, brought the idea of writing a play based on the novel to Hatcher, who immediately took on the challenge. When Ellenstein was brought into the picture, the deal was sealed and voila the world premiere of “Dr. Glas” is streaming through Aug. 15h’

Hatcher frames the monologue in journal form as the good doctor jots his notes after seeing his most celebrated patients; the not so good reverend Gregorius and his youthful wife. Let your imaginations wander. Helga Gregorious can’t stand having sex with her husband (she’s having an affair outside the marriage). He demands she perform her wifely duties. In separate visits Glas promises her to talk to her husband whom he detests, yet finally convinces him to give it a break. 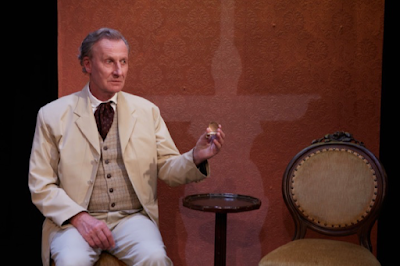 After several visits by her,  Glas admits he’s in love with the reverend’s wife and let's his imagination run away with him. What to do about the husband he loathes and has thoughts about getting rid of? He does have those tablets laced with cyanide. He arranges a meeting. If nothing else. But, alas…

As the good doctor muses, “Morality’s place is among household chattels, not among the gods. It is for our use, not our ruler. And it is to be used with discrimination, with a pinch of salt”.

Sadly, love has passed the good doctor bybut passes it off with a shrug, yet in another exchange he confesses that he wouldn’t’ trade places with anyone else. The Dr. totters on the edge the several morality questions. Yes, the cynicism gives this short piece (60 minutes) both comic and tragic edges as he explores the pros and cons of euthanasia and death by one's own hand and gives it a voice. 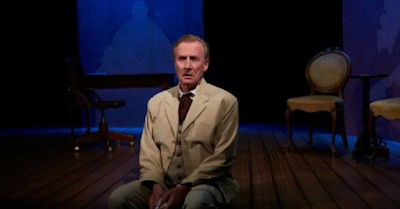 Söderberg ’short story is a loaded cannon jammed with questions waiting to be answered and for an audience to experience. I hope you enjoy it as much as I did. Let’s just say that there’s more than a morsel to digest in this world premiere psychological thriller.

A 30 min talkback follows the show. It's worth the listen.