It’s a Memory Play. It’s a Love Story. It’s a Story of Assimilation. It’s a Trip of a Lifetime on a ‘E ’Ticket in San Diego Rep’s '57 Chevy”. Hop on Board

There is something to said about memory plays that bring out the fuzzy feelings in some of us. In Emmy Award-winning writer, Cris Franco goes back to the days when his father Cris Sr. moved the family from Mexico to South Central Los Angeles, a culturally diverse neighborhood, where young Cris and his siblings flourished.

But nothing lasts forever and when the family grew financially, they moved to ‘the San Fernando Valley' when young Cris was only 10. In his own words, ‘where everything looked the same and lacked any diversity’. Their family stood out as the only Hispanic family in the neighborhood. On the other hand, Cris Sr. moved to a bigger shop and the family prospered even more.

Salinas acts out in chapter and verse (85 minutes) the goings and comings of their family dynamics, of self a -confident and self -determined immigrant who bragged about coming to America ‘legally’ to give his family everything any family could dream of: ‘The American Dream’, a big screen color TV, sending his children to a private school, albeit Catholic and a big home in the burbs, like it or not.

In his one man tour de force, Rick Salinas (of the original Culture Clash) becomes Cris Sr. and a host of characters (18 in all) including their ‘Tia’ Miss Mimi Barnes, who got him a job in a Volkswagen auto shop and a work visa to come to the America after Cris fixed her VW Bug.

In describing his dad, Cris calls him Mexican duct tape; “he could fix anything”. His claim to fame was that he was a master mechanic, but dirt poor; “old Mexican eat the dirt poor”.  His specialty was fixing German automotive i.e. Volkswagens, but when push came to shove, his real love, next to his family was his '57 Chevy that he paid $1802.00. With this purchase, Cris felt he had achieved ‘the American Dream’.

In his rendering, Salinas is a as busy as a queen bee in a beehive, moving all over the stage, (designed by Christopher Murillo) as an old garage, the Chevy, (“See the USA”) his home and using anything available in the mix and match of discarded clothes, furniture, an old vacuum cleaner, a wagon filled with anything and everything, ponchos to an old vacuum cleaner, and a wooden mixing spoon that he used as a shift lever for the Chevy when he was driving the family on outings on his day off.

It is directed by Herbert Següenza (another original Culture Clash member) and artistic director Sam Woodhouse. Along with Salinas the memory play and excellent directing by the dynamic duo, Franco’s homage to his father is both heartfelt and rock bottom honest;  “a classic”,  especially when he admits that he will not follow in his father’s footsteps to follow in the family business but will become a writer instead, and lucky for us. 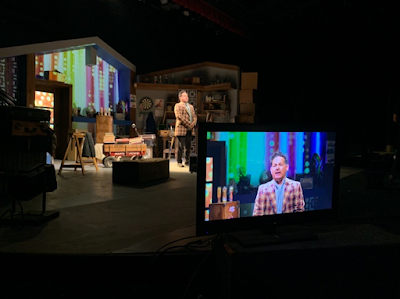 Before graduating High School in mmmmm I drove a 1955 Chevy and thought I was Miss Goddamit of my senior class.

Two thumbs up for the entire cast and crew...

57 CHEVY is available from San Diego Repertory Theatre through Aug. 15th. For show and ticket information go to www.sdrep.org