NVA’s “Desert Rock Garden” Another Look Behind the Scenes of Our Sorted Past In An Uplifting Memory Play. 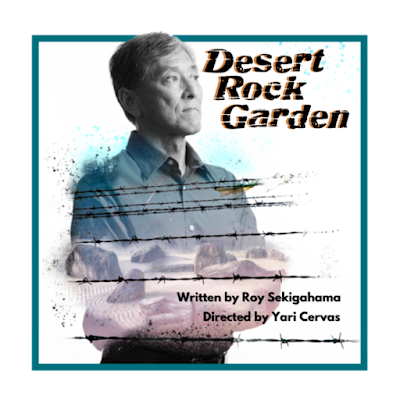 While New Village Arts Theatre in Carlsbad is undergoing a re-model in a big way, Artistic Director Kristianne Kurner, ‘the show must go on’ is launching a brand new play, Roy Sejigahama’s  “Desert Rock Garden”. Sekigahama’s parents were interned in one of the camps.

Some might remember the lavish musical production “Allegiance” at The Old Globe theatre in 2012 inspired by George Takei and his family’s experiences when he was a child in a Japanese internment camp during World War II and Jeanne Sakata's play “Hold These Truths” the one-man show about Gordon Hirabayashi, his resistance against Japanese American internment during World War II and his long legal battle for his constitutional rights as a U.S. citizen. I’m sure there are more stories like this out there that I’ve not seen, but a brand new one is at New Village Arts through March, 13th.

Executive Order, 9066 stated that all West coast citizens of Japanese ancestry be sent to off to internment camps as declared by President Roosevelt after the Japanese bombed Pearl Harbor in 1942. It mattered not that that they were citizens of this country. Their civil rights, property, jobs and businesses were confiscated and like it or not, families were hauled away and sent to internment camps. James Hatsuaki Wakasa was one of those individuals. He immigrated to the U.S. in 1903.

Playwright Roy Sekigahama developed “Desert Rock Garden” in a Playwrights Project Workshop followed by a reading at N.V.A. His play, dedicated to Wakasa, is a ‘fictionalized story about a dubious friendship that develops in Camp Topaz in Utah between a young orphaned girl, Penny (Chloris Li) and another intern she calls “Fuzzy’ (Lane Nishikawa).

When the play opens it’s 1964 and Penny is a grown woman who traces the story back to when she arrived at the camp at age 12. Now as an adult she at 33 she is successful and well adjusted. According to the playwright, he wanted to tell this story from a different set of eyes to bring some optimism through a rather unlikely friendship that develops over the course of the 70 or so intermission less play. It all takes place at The Topaz War Relocation Center in Delta, Utah in front of the bachelor’s barracks. It was nicknamed the “Jewel of the Desert,’ or the ‘Cesspool of the Desert’ depending on who you asked”

72 year old Fuzzy had lived in America over 50 years. He is a man of few words but Penny makes up the difference with her non-stop chatter about school. She was dismissed from school because she made fun of her teacher and was proud of it, but ‘Fuzzy’ tries to convince her that getting an education is very important. While the conversation continues, mostly with ‘Fuzzy’ being the surrogate teacher in everything from good manners to improving her language skills, to acting like a proper Japanese young lady to her pushing back on most of what he has to say, a desert rock (or Japanese Rock Garden) garden begins to take shape.

The set, by Reiko Huffman is a stone pebble space with varying sized rocks, some dead fallen tree stumps and a barbed wire fence with an American flag in the background. It is here that ‘Fuzzy’ brings in both rocks and some greens and places them across the stage like putting a puzzle together, all the while trying to school Penny. Penny finally gets the ides that she might want to help in the building of this garden.

As the friendship grows slowly, as is the pacing of the show, (Yari Cervas directs) ideas and attitudes change and so does the landscape of the garden. ‘Fuzzy’ convinces Penny that all gardens are not always flower gardens, some are evergreen that prosper in the desert. He also urges her the leave the camp and become adopted by a family that can help her.

Both actors do credible work (thanks to Japanese Language Consultant Yoko Kurima and Cultural Consultant Michael Kurima) convincing the audience that each one, in contrast comes to the same conclusion that theirs is a special friendship and both will take that friendship with them forever as when Penny returns, at play’s end, and pays homage to her friend and mentor, Fuzzy still carrying one of the topaz stones he had given her. It is both touching and heart warming.

As this is the upshot of the play, the playwright has accomplished his goal of telling an uplifting story in the most difficult of situations. For this reviewer, I came away from the production with a bitter-sweet feeling.

Hats off the New Village Arts and Roy Sekigahama for bringing a sorted time in our history to the fore.

Hopefully we will learn.

When: Runs through March 13.

COVID protocol: Proof of full vaccination is required or negative test result from a COVID-19 PCR test taken within 72 hours of showtime. Masks are required at all times.