San Diego Opera Couldn’t Have Chosen a Better, Lighthearted Classic Than To Open The Season With Than Mozart’s “Così fan tutte”

For the past two years the San Diego Opera was dark. The pandemic made sure of that. Now, two long years of waiting finally paid off with Mozart’s final comic opera “Così fan tutte” or “Women are like that”. It’s fun, light, charming, sort of out of date, well really very out of date but that was then. The the time of our opera is the 1950's.The voices are glorious, the cartoon like sets (Tim Wallace) are innovative as is the direction (Timothy Nelson) and the lighting design and back screen close ups (Abigail Hoke-Brady).
As for the costumes, some more innovated than others, created by Ingrid Helton. They are are a both a kick and hoot. The orchestra with many from the San Diego Symphony Orchestra, under the baton of Bruce Stasyna, provided strong support for the on and back stage singers.
Of Mozart’s collaboration with librettist Lorenzo Da Ponte (“The Marriage of Figaro” and “Don Giovanni”) this libretto should be the first one to get the prize for not believing in the powers of a woman.
In this rendering the plot is hatched in a men’s locker room rather than a café as originally set. Two officers Guglielmo (Baritone John Brancy) and Ferrando (Tenor Konu Kim) wager the cynical Don Alfonso (Baritone Reginald Smith) that their lovers Dorabella (Mezzo-Soprano Samantha Hankey) and Fiordiligi (Soprano Sarah Tucker) will remain faithful to them even in their absence.  Don Alfonso says otherwise.
At a meeting with the two women, Don Alfonso tells the two that their lovers are being sent away to military training and the dam breaks lose. Tears flow and the women are inconsolable.
Included in this little fools’ tale is Despina (Soprano Alisa Jordheim) a maid and The Don’s partner in crime. Her other disguises are characters vaguely resembling those in ‘The Marriage of Figaro”.
Furthering the ‘plot’ the men come back disguised as Albanian soldiers. Unfortunately, they fail to woo each other’s lady and pretend to take poison. Despina, disguised as a doctor magnetizes them to life, and the folly resumes as the men come back disguised as cowboys, and not very convincing ones at that.
Costume Designer Ingrid Helton whom I’m assuming is responsible for the diaper wearing, depressed and hapless Cupid whose name never appears in the program and who never utters a word, must have thought hard and long for his look. Theatre goers will recognize him as Jack Missett even though he might have a hard time recognizing himself. 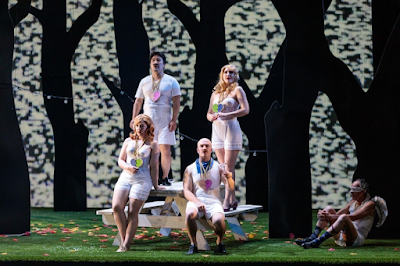 Helton has a field day with her costume/non costume of skivvies and T shirt 1950’s look for the men (in the program notes, as Time and Place: “Between the cusp of youth and the precipice of adulthood”). and bloomers and petticoats for the women (most of the time). Why, I’ll never know. In the colorful opening scenes, the women are wearing almost look-a-like colorful flowered dresses. One might assume that the rest of the costumes would follow similarly, but not so much.  Before we know it, both couples are reduced to their undergarments. As for Don Alfonso, since he staged this little farce, he’s dressed and acts as the director
But the evening really belongs to Mozart’s gorgeous music. The six luminaries who soar during their solos and duets enhanced by the small back stage chorus.
Tenor Konu Kim’s, Ferrando is small in stature but has a big tenor voice especially when he’s singing his love song to Dorabella or when he’s chiding her for flirting with John Brancy’s Guglielmo, now in disguise.
In contrast, John Brancy’s baritone blends well with Kim’s but he and Smith have fewer solos to perform.  Smith on the other hand teams up with Soprano Alisa Jordheim’s Despina to provide most of the laughs. When he does sing, his Baritone voice is smooth and most powerful.
Mezzo-soprano Samantha Hankey’s "Smanie implacabili" was a stand -still moment and highlight of her performance. Soprano Sara Tucker as Fiordiligi in her "Come scoglio." shows off the depths of her range and her vocal prowess.  So, an A+ for overall consistency in both music, performances and technology.
There is so much more going on that to list it chapter and verse would take away from the overall enjoyment of watching how silly both sexes are acting toward one another by trying to convince themselves that true love is forever and in the eye of the beholder. One doesn’t have to be convinced by trickery, to prove it to be true. But… that’s the name of this little farce “All women do it” or “All women are like that”, so enjoy it while you can and relish the music and gorgeous voices while rolling your eyes at the story.
Bravo to director Tim Wallace: Company debuts by Reginald Smith Jr. as Don Alfonso, Samantha Hankey as Dorabella, and Konu Kim as Ferrand and the return of Soprano Alisa Jordheim as Despina and Sarah Tucker as Fiordiligi.
Enjoy
When: 7:30 Friday. 2 p.m. Sunday.
Where: San Diego Opera at the San Diego Civic Theatre, 1100 Third Ave., San Diego.
Tickets: $35 and up
Photo: Karli Cadel
Phone: (619) 533-7000
Online: sdopera.org
COVID protocol: Proof of full vaccination or negative COVID-19 PCR test within 48 hours of showtime. Face masks required for all indoors.