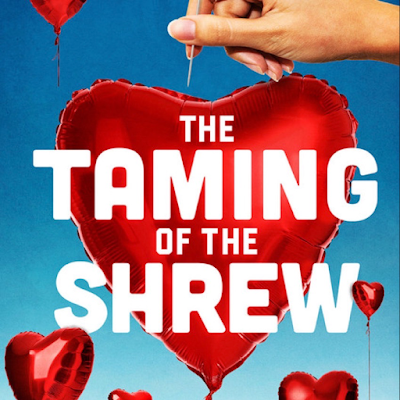 Mission Control! We’ve got a conundrum at hand. Shakespeare’s problem play, “The Taming Of The Shrew”,  the most misogynistic  of his plays is back in town on the Festival Stage in Balboa Park, no less, with director Shana Cooper’s reimagining of it to make it less so.
In subterfuge, there’s lots of shimmering, slapstick, overzealous swaggering, strutting, over- exaggerated humping and pumping with musicians galore with music from "Kiss Me Kate" and Abba to name a few.
Somewhere in the mix, is Kate or Katherine (Deborah Ann Woll) the object of The Bards ‘Shrew’, a haughty, man hating female who of course has to be tamed so that her easy going, beautiful and younger and seemingly tame, sister Bianca (Cassia Thompson) may marry. And who better to tame her? Why the only one who measures up to the task, Petruchio (the youthful and somewhat charming James Udom) from Verona, who came to ‘to wive it well in Padua’. He’s also looking for someone with a huge dowry.
Bada Boom!
“Shrew” is what “Shrew” acts, says and does and no matter how loudly she doth protest or how much progress women think they have made, Kate, as in ‘the shrew’ still serves ‘tamer’/master/ husband Petruchio. Call it comedy, if low ‘comedy’ is your thing, (it is one of Will’s earliest, and has all the elements of his later ‘romantic comedies’ including the ‘happy ending’). We can debate that point later.
In case background info is essential this is the one about Petruchio who upon arriving in Padua from Verona discovers that Baptista Minola, (Armando Durân) a very rich Lord in Padua, has two daughters of marriageable age. The eldest is the tempestuous, ‘fiend of hell’, Kate. 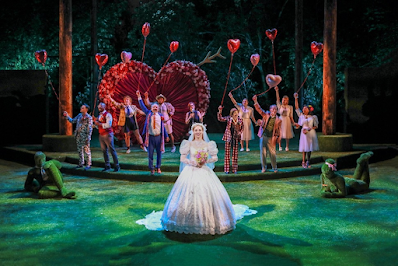 No guy would even consider marrying that one nor, is she interested. Her younger sister, the beautiful and forever wooed Bianca has at least two (that we know), men wishing to marry her, Hortensio and Grumio (Orville Mendoza and Jessie J. Perez). Did I mention that gender bending comes with the territory?
Also, did I mention the arrival of Lucentio (a handsome suitor Jude Tibeau) has arrived in Padua to attend Padua U. but falls madly for Bianca. Oh, so many plots and subplots. This plays out to many laughs.
Before the wedding and during the (ahem courtship), Petruchio has his own way of taming Kate (“If I waspish, beware my sting”). After the wedding he drags her off to Verona but not before telling all within earshot that she is now his property and may do with her as he pleases. Back home in Verona he refuses to allow her to eat or sleep until she is completely broken (and that is supposed to be funny) and the circus of who will marry Bianca continues.
Bringing us in and up on all the news that’s fit to print is the peppy and wordy and most of the time drunk Grumio who also happens to be Petruchio’s go- to guy er…Several other characters play multiple roles and some are quite laughable while others are not.
All of the above is the essence of Shakespeare’s early works, however director Cooper has put a different spin on the same set of circumstances by giving Kate a few more tools by agreeing not to agree with Petruchio but having him turn some of his thoughts inside out so they both agree to agree. A clever turn of events and both, after a fashion, return to Padua as a most agreeable couple to the astonishment of the gaggle of onlookers. To the actors credit, there was a bit of a sparkle between the two upon first meeting. That helps to make it a bit more palatable. 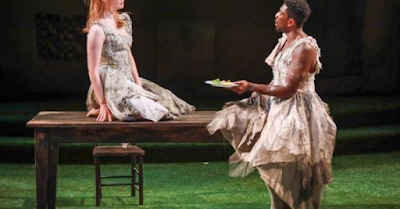 All of this plays out on a set designed by Wilson Chin. Topiaries of life sized men and women dressed in party outfits stand in the background while the actors play out the story on more turf below.
Asa Bennie Hostetter designed the costumes including the look alike wedding dresses for bride and groom. That was a hoot especially after it looked like he was going to stand her up for the ceremony.
Stephen Strawbridge’s lighting is perfect but not so perfect were the animals next door at the zoo who decided to come awake for the show.
All in all, it was entertaining, but this old timer is still stuck in a time warp and is all too familiar with women(and men) who are abused. If I had my druthers I would rather see "Kiss Me Kate", with  music by Cole Porter.
OH! You be the judge. Is Kate Shrew or Shrewd?
Dates: Through July 10th
Organization: The Old Globe Theatre
Phone: 619 -234-5623
Production Type: Romantic Comedy
Where: Lowell Davies Festival Theatre, 1363 Old Globe Way, Balboa Park
Ticket Prices: $30.00 and up
Web: theoldglobe.org
Photo: Jim Cox
Posted by Carol Davis at 12:40 PM