“The Outgoing Tide” At North Coast Rep. Is Bittersweet And Heartfelt 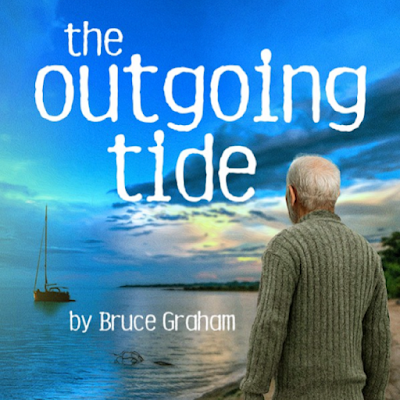 72 year old Gunner Concannon has a sure fire plan, all thought out in detail, to end his life and leave his family well off. Peg, his wife of fifty years (give or take) has other plans for Gunner. Her plan is to keep him safe and cared for as his dementia gets worse. Brochures of nursing homes are all over the house. Gunner will have none of it. “It’s like a roach motel, ya check in but ya don’t check out.”

Their fifty (give or take) year old son Jack is in the middle with his own tsuris to deal with. He’s in the throws of a divorce and the conflict between his parents has put him in an untenable family situation. It’s not exactly like walking on eggshells but at times it feels just like that especially when both parents tell him things they don’t want the other to know this or that. It’s kind of a running joke.

Gunner loves throwing stones into the ocean to see how many times they skip over the water. (I did that as a kid as well only in a lake.) He loves fishing on the beach of his now permanent home on Chesapeake Bay just a walk away from everything he loves and knows, or not.

One thing he does not love and that’s that the idea that he be sent off to a nursing home for people with Alzheimer’s.  His wife Peg seems to think would be good for him; it has a pool; a gym and you have your own apartment. Of course, that’s when you are healthy.  But then there is A Wing…The hospital part.” It’s so depressing”.

The tides along Chesapeake Bay are as predictable as Gunner is unpredictable; but it wasn’t always that way with Gunner. Oh, sure he always loved a good joke (PC or not,) his television likes included episodes of Cops”, he never could relate to his 50 year old son Jack, in fact when we first meet Jack along the shores of the Bay where Gunner is fishing, there is no acknowledgement of a relationship between father and son. It’s like a stranger happened along.

And when he tried to watch one of his shows on TV (he even put new batteries in the clicker) and it didn’t work he was convinced the TV was broken until Peg told him it was the Microwave he was pointing at. Or when he came out into the kitchen without his trousers. But ask him something that happened fifty or so years ago, he’s on top of it.

Bruce Graham’s “The Outgoing Tide” is a bitter -sweet and yes significant play about family, about promises, and end of life issues; no holds barred. It is beautifully performed by a strong cast of three and deftly directed by Nike Doukas.  Oft times not an easy to digest topic especially when Gunner and Peg, whose love affair has always been on solid ground, is at crossroads with how and what decisions must be made.

Seasoned cast members Andrew Barnicle and Linda Gehringer fit into the roles of Gunner and Peg like hand and glove, complementing each other and showing affection throughout. Neither role is an easy task albeit the topic, a red hot one these days and both are up to the task of convincing us they are in the middle of it.

Leo Marks has the difficult role of referee, son, father (back home in the burbs of Philly he has an incorrigible son who won’t even bathe) and his EX has not signed the divorce papers. But he hangs in there for his parents, like it or not, and things do manage to come full circle for the family but not without a lot of compromise, hugs, sobbing and resolve.

Marty Burnett’s set is spot on with cat tails and sprigs of greenery oft seen along the waters off the Atlantic. Another high five for Burnett, Matt Novotny’s lighting, again is spot on, Elsa Benzoni’s costumes, casual beach wear and Aaron Rumley’s sound design has us actually hearing the sounds of the tide. Well done all around.

Hats off the North Coast Rep. for bringing another great production to our fair city.