Yes the story is based on the well -known Dickens’ “A Christmas Carol”, but I dare you to tell me that you’ve seen the Alan Menken (music), Fred Ebb  (lyrics), Terrance McNally Lynn Ahrens (book) version. In all my years of covering theatre, I’ve not seen it before.

It’s smashingly good! It runs about 90 minutes without intermission. 14 cast members play no less than 126 different characters, and what’s to marvel about this? They are all terrific and that includes nine-year-old Madison O’Donovan (Scrooge’s young sister Fan) playing at least four other young people and seven-year-old Ruby Spencer is Tiny Tim. Spencer’s Tim character (“Christmas Together “/“God Bless Us Everyone”) will break your heart and is the smallest trooper in the cast doing man sized work. What a find.
Working as an ensemble, they cross paths, help each other change costume, (a monumental task since changing as the next turn in the story comes fast and furious, a new set of characters can emerge), work closely with the children in the show and move sets (Tony Cucuzzella) that are appropriate for each part of the story.

Costumer Janet Pitcher and the Theatre Company in Upland furnished the costumes but little elves out of our sight and even in sight make the magic happen.
Rudy Marinez is tip- top as the old miser Ebenezer Scrooge. Unassuming and looking right for the part he is on stage for most of the entire 90 min. (“The Lights Of Long Ago” parts 1and 2) with the amazing JD Dumas (who takes on many other small parts) as Christmas Past never letting Scrooge off the hook telling him that he will be ‘visited by three ghosts of former business associates who will scare Scrooge silly and try to convince him to change his ways or he will end up like him.

Both keep the story flowing as others fill in the background either passing by, beggars or small urchins on the streets begging for money. McNally and Ahrens keep faithful to Dickens while Menken delights and stretches the imagination with his lively and oft times funy/sentimental score and the talented cast does the rest.
Allan Everman (Leo Frank in “Parade” at Chance Theatre) is a fine Cratchit willing to forego any pressure from Scrooge for the pleasure of being with his family.

Shaina Knox as Mrs. Cratchit (Eliza Doolittle in “My Fair Lady”) is just the right fit and Hanz Enyeart (“Fiddler on the Roof”) makes a believable young Jacob Marley.
Winston Peacock (lots of hair and chains “Link by Link”) as frightening as he can look as the ghost of Christmas Past ("Lights of Long Ago"), and old Marley, Scrooge’s partner in crime comes back to haunt him. He reminds him of how things used to be (“A Place Called Home”) when he was young and in love with Emily (beautifully portrayed and sung by Shealyn Sailors) and they were planning to marry. Scrooge sorta- kinda wonders where it all went wrong.

And standing just about as tall as some of the younger members of the cast Leigh Scarritt is Christmas Present and Sandwich Board Man). You have to hand it to Ms. Scarritt she is dynamite on the stage and that red curly wig (Katherine Scott) is almost as long as she is tall. But it works!

Well, I’m sure by now the story has come back to you and in the end Tiny Tim calls out “God bless everyone!” And that includes the smiling, participating and almost loving Ebenezer Scrooge. 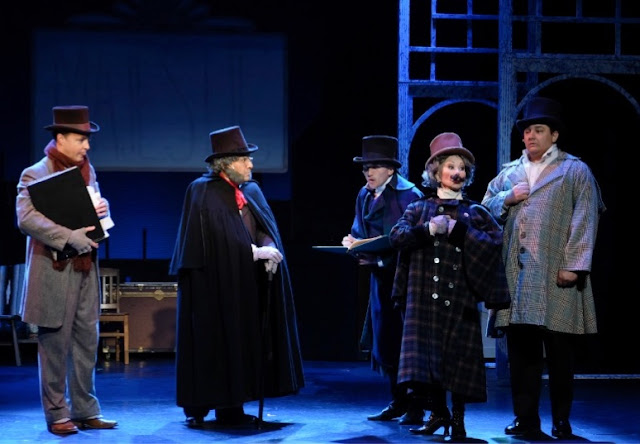 There are no less than 14 scene changes and 19 musical numbers. Excellent support is provided by musical director Justin Gray, Patrick Hoyny, sound design, Jennifer Edwards, lighting design and last but not least, hats off to Karl Warden for the delightful choreography. (Yes there was even a tap number).

For fun and something different for the Holiday Season, experience an Alan Menken “A Christmas Carol” and we can talk!
Enjoy