“The Season Of Love” Makes The World Go Round

In “The Season of Love” now in a world premiere at Scripps Ranch Theatre in Poway through Dec. 10th local playwright James Caputo takes a page out of a popular playbook, ‘Tis The Season’ to present four short vignettes in his oft time funny, oft times predictable, oft times serious sides of love.

Caputo is no novice to playwriting. He’s written several short plays that have been well received over the years. Included in that list of short plays, “Variations on a Theme”, (posted on National New Play Network) sounds and looks the same as “The Season of Love”. For what it’s worth, this reviewer finds the former title best suits this piece. All four vignettes are ‘variations on the themes of love found, lost or renewed.

Neatly directed by John Tessmer and blessed with a great cast “The Season of Love” is funny, poignant and surprisingly different as in the last set showing two homeless souls sharing an empty refrigerator box as shelter. So very today lest one was not aware that we here in San Diego are right in the middle of a homeless crisis.
‘So very today’ (The date is Dec. 24th   Christmas eve 2016 and the first day of Chanukah) might be the operative word for the situations in which the characters in Caputo’s scenarios find themselves. The first is Jane (a convincing Sherri Allen) siting alone on the patio of a coffee shop doing a crossword puzzle.

Several people cross her path, homeless with a cart is Eloise (Julie Clemmons) and a bit later her friend Ruth (perfect comic timing Jill Drexler). Both are concerned with the state of her singleness.

It seems everyone in Jane’s orbit, including her mother-  “The cantor looks like Neil Diamond” - (not seen) wants to see her happily married. Spoiler. She’s been burned once.

It doesn’t say much for her friend Ruth the ever ready to encourage her to find ‘someone’. Ruth and David (Eric Poppick), now in the midst of a divorce and on record and signing off on their settlement, (and on the first night of Chanukah) should be the last to encourage Jane to get involved in another trip down the isle.

Back to Jane. Hovering (“don’t hover, sit”) in the archway of the coffee shop patio, Anthony (Paul Morgavo) seems to be on the lookout for someone he connected to in an on line dating service, with but as fate would have it he and Jane start up a conversation about the New York Times Crossword Puzzle and well…as they say, it’s the season of love.

Another story takes place in a funeral parlor. Mary (Grace Delaney) greets Anthony and small talk ensues but she is curious about Anthony’s love life. (”You’re chipper. You look different”).
Amy (Rhiannon McAfee) enters the parlor and takes a seat next to Mary who is now knitting and it is revealed that Amy just ‘needed to spend a little time with death.” Her father is ill and sharing with a perfect stranger makes life a little easier for her as she prepares for his death.

My favorite is the sketch between Drexler and Poppick, as the middle -aged couple that can’t stand each other yet can’t stop sharing memories. Drexler a natural comedian and Poppick has this deadpan look that is hysterical. Between the two at their favorite restaurant (Bob Shuttleworth) hassling over whether David (Poppick) should have salt in his food the signs of their marriage are still there, they just haven’t gotten the memo yet.

Between berating each other, each breaks through the fourth wall and speaks directly to the audience bringing them into what they perceive as a failing marriage. Both hit the jackpot in their respective parts.
Paul Morgavo is also plays Alfred the homeless and with a change of character and clothes (Dawn Fukker-Korinek) He’s solid ground especially in his interactions with Jane as they coyly and tentatively go about beginning a new relationship.

With optimism in the air in each of the short vignettes one can’t help leaving the theatre with the hopes that things have to up from where they are now and the holidays will bring in optimism in a country filled with doubt and fear. 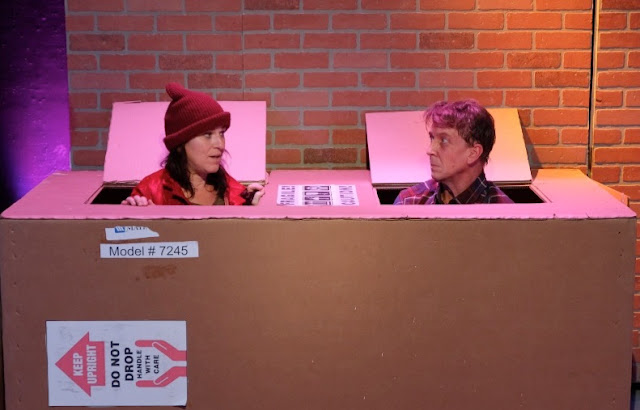