After the opening night performance of “Something Rotten”, I asked one of the cast members how many Broadway shows were spoofed or referred to in this new musical (“A Musical”) by Academy Award nominees Wayne Kirkpatrick (music and lyrics) and Karey Kirkpatrick (book) with best selling author John O’Farrell now on stage at The Segerstrom Center for the Arts in Costa Mesa, and he mentioned 90.

Funny thing, I recognized almost all of the snippets in this fun filled, over the top, and irreverent nod to Shakespeare, but as is the case in most fast paced (Casey Nicholaw directs) and ever so bouncing off the ceilings shows, it’s difficult to keep up while you are chortling in your seat.
The opening number “Welcome to the Renaissance” sung with puck and verve by the entire cast sets the tone: “Welcome to the Renaissance/
Where we ooh and ahh you with ambiance /We're so progressive (the latest and the greatest)
(We bring it to you) with much ado (Welcome to the Renaissance)
Where everything is new”

The Bottom brothers, Nick and Nigel (Rob McClure and Josh Grisetti) are aspiring playwrights in a theatre troupe.  They are anxious to make a name for them like their former troupe member, Shakespeare, who as of now has cornered the market and is still reveling in his “Romeo and Juliet”.  Their quest is to write a play about something that Shakespeare (Adam Pascal) has not already written. (“God I Hate Shakespeare”)

While Nick searches the countryside high and low for ideas Nigel continues to write without consulting Nick. On his travels, Nick checks in with the soothsayer Nostradamus (Daniel Beeman), no not that one, but Thomas Nostradamus, who sees that the next play Shakespeare will write is called “Hamlet” but screws up and calls it “Omlette”. “Like with eggs?”  Assuring, he predicts it will be a great musical where everyone breaks out in song.
With the idea firmly planted in Nick’s mind, he now needs money to finance his project.  He tries to enlist the services of…why not? Shylock (Jeff Brooks) the money- lender…but runs into a sort of brick wall when they are informed that the money- lender is not allowed to ‘invest’ or profit from his cash.

In the meantime Nick's wife Bea (Maggie Lakis) is a go -getter and wants to earn some money on her own  to add to the family coffers  by working outside the home. OMG in Renaissance time? Declaring that it’s the ‘90s and there’s a woman on the throne, she disguises herself as a man and goes off to work. Sounds like an oxymoron, but OH WELL!
Not to be out done, Nigel’s love interest Portia (Autumn Hurlbert) is a bit more interesting. Her Puritan father, Brother Jeremiah (Scott Cote) is a hoot and a half as he tries to visit his puritanical values on his love crazed daughter by shrugging her off with an over the shoulder snub that had your truly in hysterics. But the real laughs come when Nigel reaches into his oversized codpiece and pulls out… his love sonnet to Portia. Not with standing, both women were in fine tune with beautiful singing voices.

Back in the city (Scott Pask’s scenic design is more cartoon than reality), short on ideas as well, the strutting rock star (“Will Power”) Shakespeare is disguised in some weird getup (Gregg Barnes) and proceeds to follow Nigel in order to well, glimpse the ideas that he, Nigel keeps safely tucked away so no one can plagiarize, (hint, hint).
It seems Shakespeare is also having writers block. References abound about Shakespeare who may or may not have written all that he’s been given credit for; think Christopher Marlow. It’s pretty much spelled out in the movie “Shakespeare In Love” as well.

Back with Shylock and with much ado about everything, the money- lender himself would like to become a ‘Producer’. So in some convoluted (as is most of the, ahem story is) he manages around the rules and agrees to finance the cooked up musical “Omelette”. And if you don’t think that’s a scrambled mess, try dancing wrapped up in an omelette costume.

Coming from the creators of “Book of Mormon” and “Spamalot”, put your thinking caps on and try to imagine this show, but on steroids! Or think “Forbidden Broadway with references to “Phantom”, Mary Poppins”, “Annie”, "Fiddler on the Roof”  “Avenue Q” and “In The Heights”, to mention a few. 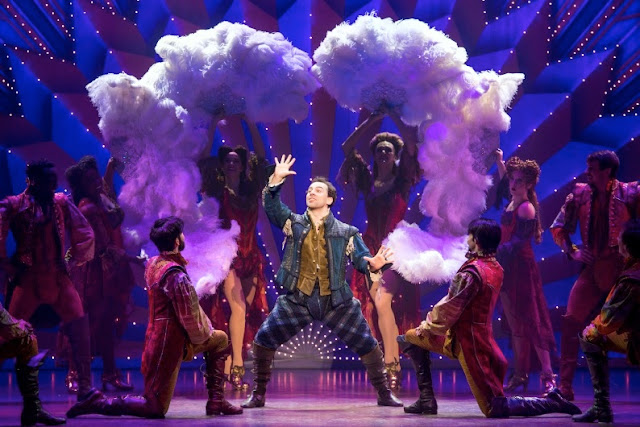 “Something Rotten” was nominated for 10 Tony Awards when it opened on Broadway in 2015, including Best Musical. It’s fluff, it’s fun, and it’s clever, loaded with off colored jokes and filled with rousing production numbers and a talented cast that goes deep. It's well worth the price of admission. It’s also worth seeing if and when it reaches San Diego.

In the meantime, if you miss “Something Rotten” in Costa Mesa you might want to activate your umbrella App and Mary Poppins it to the Ahmanson where it will be opening on November 21st and will run through Dec. 31st.