Sadie, an elderly Jewish lady, is leaving the garment district to go home from work. Suddenly a man who has been walking towards her stands in front of her, blocks her path, opens up his raincoat and flashes his wares in all their sordid glory. Sadie looks at him and says:  "You call that a lining?’’ Badda Boom!

Funnyman, writer, comic, actor, husband, father and mensch (a person of integrity and honor; noble character) come to mind when thinking about Phil Johnson.
So it was no coincidence that the character, Bernie Lutz, Phil Johnson plays in his (and Marni Freedman’s) bitter sweet comedy drama “A Jewish Joke”, now making a revival at Moxie Theatre through April 8th, is asked by his mother (in the play) to show up as a mensch in his poverty stricken childhood home, and be the one to go out and earn a living for the family. He was the youngest of the children and the father was out of work.

Fast forward to 1950 and the world as many of us once (I remember it well) knew was under attack from none other than predecessor to Donald Trump (think Hispanic),  Joseph McCarthy, head of the House Committee on Un American Activities. He was looking for Commies under every bed, highway and byway and especially in the entertainment industry paying close attention the Jewish entertainers.

It was no secret that by 1947 a Hollywood Blacklist or 'Hollywood 10' including Hollywood directors, writers, and actors who were suspect of having their works inspired by communism or were known to have attended meetings or donated to those meetings were rounded up, like criminals, and forced to give testimony before the committie.

There was a pamphlet that came out in 1950 “Red Channels or The report of Communist Influence in Radio and Television” listing suspected “Red Fascists, and their sympathizers”.

You can do your own research on which of the sanctimonious gave the committee names of their peers ruining their lives, families and robbing them of their livelihoods. It pains me too much to print their names in my blog.

In Johnson’s Jewish Joke” Bernie Lutz is a successful 54 year old business man. He is a writer and jokester, somewhat full of himself character on the verge of having one of his and his longtime partner and childhood friend Morris Frumasky’s projects, The Big Cashbah” a new comedy from MGM, opening to a world premiere that night. 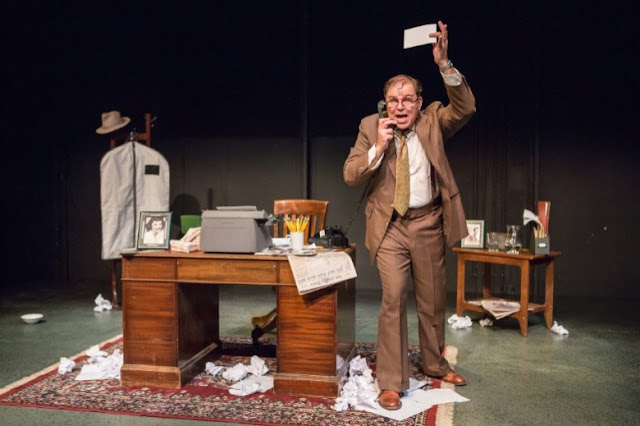 Hovering over his joy and excitement in the next step of his successful career, and soon to be Hollywood premiere and walk of fame down the Red Carpet, is a letter he refers to is ‘this meshuggenah commie letter business. Lutz considers himself apolitical but admits that he did attend a fundraiser with Morris. No biggie, he but claims innocence when asked about it.

Throughout, Johnson’s Lutz fields one phone call after another from friends, acquaintances, producers, not so friendly friends, directors, FBI Agents, lawyers, his wife and a G-Man willing to ‘make a deal with Lutz.

The one call he does not get is from his partner Frumsky. Keeping in mind the time frame. In between calls, he finds time to pull a series of 3x5 cards with jokes on them and deliver them to the audience. Funny thing, nothing was funny about what was about to happen to him as the play progresses. Another funny thing, it is well documented that comedy soothes the Jewish soul.

There were no Caller ID’s; no call waiting and for the most part everything went through an operator or front desk secretary. The waiting for Frumsky or anyone of his friends or adversaries to call back and get answers to any number of his concerns, most importantly MGM that was cancelling his contract, was driving him crazy.

He also had contracts with a Marx Brothers film he was writing and a new sit -com for Danny Kaye. Other projects in the works were being siphoned off to other sources. 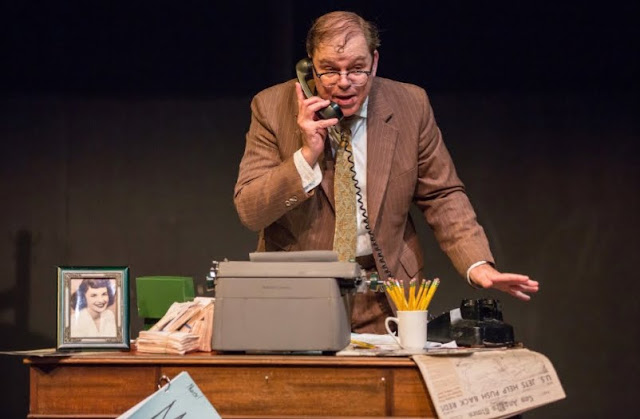 Even his conversations with the FBI, one almost had the feeling that Bernie wasn’t quite sure about his role in this investigation. He was funny man, wasn’t he? Politics was not his game. Forget that his own father was suspect of setting fire to a building during a long union strike. Stuff happened that is now coming back to haunt and ruin his career. If Bernie named names, he would be free and clear. It was, according to the FBI, the right thing to do.

But lets get back to that nagging Yiddish word: Menchkite. It doesn’t happen over night. It’s a learned behavior practiced over the years. And just as we thought Bernie was fed up with Morris, who by the way lied to him about his attendance at the ‘meetings’, that he would name names including Morris to the UHAC…Well like I said…

In a moving, well timed, well calculated tour de force performance Johnson crosses all his  T’s and dots all his I’s. This ‘comedy/drama’, under the direction of David Ellenstein, is not only unforgettable it’s what theatre is all about; stories that some minds might have forgotten and bringing them to the fore.

Yes there were movies about this particular time in history. But you are hearing from someone who actually lived through them and watched them on her small 12” RCA Television (“Have you no decency, sir?”) set.

But this is one play with one man on stage for no less that 80 minutes giving it to you chapter and verse and pouring out all his energy into his experience. You will laugh, gasp in horror or cry at the dishonesty and injustice of it all, and applaud for the guts it took to stand up for what was right. BTY. Where are the righous now?  Not a mensch among them.

In the right hands, and with a bravura performance as we were privileged to see just recently with Johnson at the forefront, its no wonder that this particular show is at the center of an old storm of rising new anti-Sematic discourse that has increased to new levels of concerns right here, right now.

With Matt Lescault-Wood’d sound design (conversations directly from the hearings) and Chloe Oliana M Clark’s lighting, Jordan Smiley’s brown generic 50’s suite on Johnson and a cluttered office room (no credits) and a nagging phone that doesn’t rest (Bonnie Durban (properties) the visuals are just right for the Moxie Space.

In 2016 “A Jewish Joke” was part of the S.D. Repertory Theatre’s 23rd Lipinsky Family San Diego Jewish Arts Festival. That’s when yours truly first saw this piece and was moved beyond tears it was so exquisitely told. Seeing it again for the second time, I am no less impressed by its importance.

Some things have been added. I can't remember if anything was left out. One addition is a schtick about a cat we never see. No need for that bit, but otherwise the story of his love and devotion he carries for his wife Elaine is beautifully told.

Hats of to Johnson and The Roustabouts Theater Company. Its next move is to off-Broadway after this current run.