“The Happiest Place on Earth” Perfect Showcase For Jacque Wilke

It’s a pretty sad commentary when a trip to Disneyland is a constant reminder of the death of a family member. That’s about how it was for Philip Dawkins’ family after the death of his grandfather Phil in his 90 -minute tribute to the man in his solo play “The Happiest Place on Earth” now showing at Diversionary Theatre through April 15th.

Always in the background of his families yearly trek, Disneyland in all its glory, all its parks all it adventures that in 1955 formed the basis of Dawkins’ memory play with the use of photos, transparencies and music.
How to tell one’s own story for a little over 90 minutes, no intermission without boring the rest of those listening? I know I was always cautious when the home movies came out. Still sliding baby pictures of grandkids playing soccer, swimming laps or playing tennis across a cell phone face can be a show stopper but for how long?

Dawkins wrote the piece for himself. It debuted in 2016. It’s clear throughout that the passing of the family patriarch left lingering hurts, awkward memories as when his Mom got lost in The Magic Kingdom of Fantisyland and was found and rescued by Cinderella who, as it turned out, tried to bring a smile to the little girls face.

Making its west coast premiere at Diversionary Theatre under the direction of Jonathan L. Green, who helped Dawkins with the piece and then went on to direct the world premiere production of it in Chicago and with the versatile and gifted Jacque Wilke standing in for Dawkins, “The Happiest Place On Earth, according to Dawkins, ‘is the story of me retracing my families journey from Albuquerque to California in a time of great sadness.’

D: “Between the ages of fetus and 18 I visited Disney’s Magic Kingdom in Anaheim, CA. over 20 times. Always with my family. Always at Christmas.

And so begins the business of sharing. “Alright. Is everybody neat and pretty? Then on with the show. 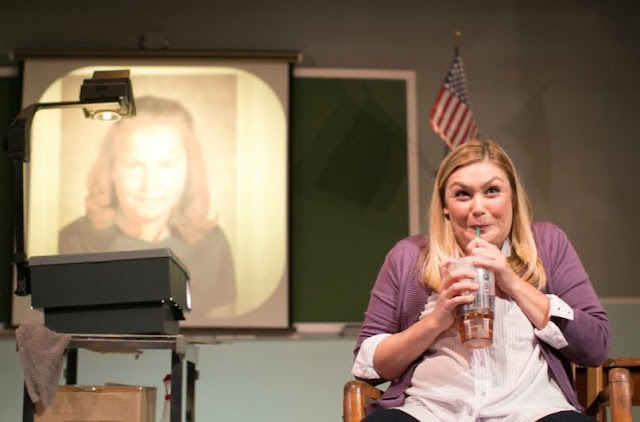 After Wilke assures us that she is standing in for Dawkins, she tells how his grandparents, Betty Lu and Phil met, got married and together had four daughters, Karen, Mary Lou, Beth and Nan. Phil was a sports announcer and when he heard of Disney’s Park opening, he decided it would be a grand place to take his daughters when he wasn’t on the air. The Park opened the same year that daughter # 3 Beth, was born, 1955. Beth was Dawkins Mom.

Wilke weaves Dawkins’ story with such authority and assurance that if she didn’t tell us…well never mind on that one, just trust me that she seamlessly threads the needle between family, park visits, life altering stories and colorful tid- bits about the family and the sisters, the park and some of its secrets that yours truly, who also traveled that road by taking our family to Disneyland for the better part of my three young’un growing up years, never realized.

Disney always called his employees ‘Cast Members”. No cast member could answer a question with a simple “No” or “I don’t know”. “I’ll find out”, was the correct response to every question that could possibly be asked if the ‘cast’ did not know the answer.

The Disneyland RR circles the Park every day at 8:AM Pacific Standard Time and admission to the Park was $1.00 with tickets marked from A to E rides additional. The E ticket was for the Matterhorn Mountain ride. It scared the bjesus out of you. 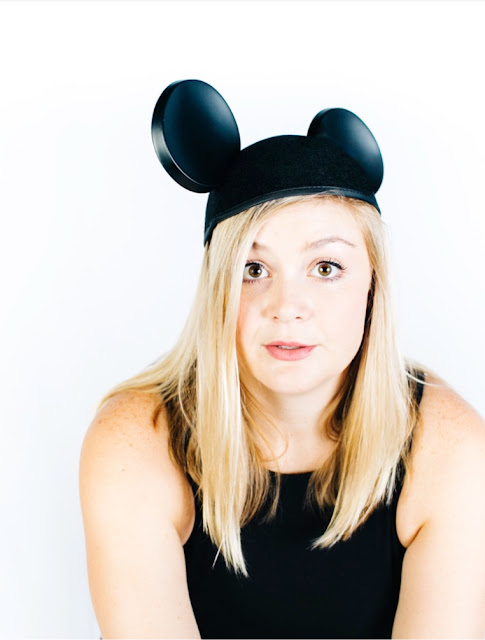 With Wilke at the helm, Dawkins story never gets bogged down but yours truly thought it could have been a tad shorter and did have some difficulty sorting out the sisters even though pictures of each were shown from an overhead projector, perched on a table, on to a screen on the back of the theatre (Kristin E. Flores).

What I did find fascinating were the transparencies of early park renderings and just what the early park looked from above.  Divided up into five distinct lands each having its own special flavor (Tomorrowland, Fantasyland, Main Street, USA, and Frontierland) Disneyland is still almost on everyone’s ‘to see’ list when visiting California, or for that matter it’s always a place to take visitors.

When my late husband and I visited the park in 1959 it must have looked pretty much the same as it did to young Philip, who appears in the family album seven years after Beth and husband were married.

Every picture of the family at the park was taken in the very same spot in Frontierland ‘where Davy Crocket sang about his gun.’ There are fifty years of pictures from the very same spot. The group was waiting to take the raft to Tom Sawyer’s Island.

Coming full circle Philip understands that nothing is promised, and no one lives happily ever after.” But at the end of the day in “The Happiest Place Ever”, happiness (in this setting) is an idea, created by a man called Disney, in a park in Anaheim, CA where it’s OK to let your hair down and escape on a pirate ride, fly on elephants, see children from around the world, meet the Mad Hatter, come face to face with Sleeping Beauty, Goofy, Mickey and Minnie Mouse and Pluto, tell your dreams to Cinderella and for sure “Wish Upon A Star”. Why not?

Completing the picture is Wilke in charge at all times making the most of the long stage expertly changing out one picture for another dressed simply in striped blouse, black capris with lavender sweater, easy on the eyes, designed by Elisa Benzon and with a bevy of facial movements to let us in on her thoughts. Curtis Mueller’s lighting design, Michael Huey’s sound design and composer and Bonnie Durben’s properties designer complete the and enhance the picture.

Hats off to Jacque for an excellent tour de force performance, no doubt about it.