“A Jewel In The Crown City”: A Nostalgic Look Back At the Best of Lamb’s.

It was ‘Some Enchanted Evening” at the opening night of Lamb’s Players Theatre’s 25th anniversary celebration honoring itself. 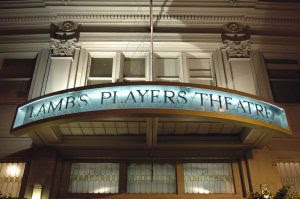 Highlighted shows from “West Side Story” (“Something’s Coming”) “My Fair Lady” (“I Could Have Danced All Night”, “Get Me To The Church on Time”), to “Le Miserable” (“I Dreamed A Dream”), “Hello Dolly” (“Put On Your Sunday Clothes”), to “Joyful Noise” (“Hallelujah”), “Into The Woods” (“Children Will Listen”) and “Time To Remember” from “The Fantasticks” are but a few of the twenty-six or so shows this company has performed over the years taken from its twenty-five year musical history yearbook.

With a somewhat brief history narrated and interwoven throughout the evening by Robert Smyth, (who joined the company in the early 70’s and is and has been producing artistic director since 1976), of the how and the why the company moved from their small space in National City to another venue to accommodate a growing audience, we were privy to groundbreaking photos and slides to projections (Ken Jacques and Michael McKeon) of the shows highlighted, on an overhead canopy as part of the scenic design by resident designer Mike Buckley.
With an all star studded cast of sixteen seasoned Lamb’s players to those fairly new to the company, most dressed in variations of black (I understand since black is my color of choice) and looking very spiffy (resident Jeanne Reith, thank you) the show, all rolled into one fantastic package is fast paced, up scale, perfectly executed and beautiful to look at. 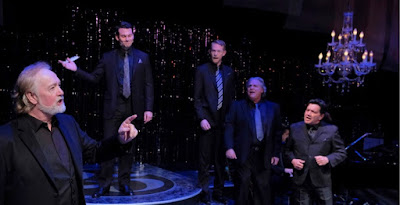 Conceived and staged by Robert Smyth, Deborah Gilmour Smyth, Kerry Meads and G. Scott Lacey one musical number after another from the above mentioned shows ran the gambit from solo’s to near production numbers to some cast members blending into the orchestra to play an instrument or two.
The Lamb’s Band composed of  Cris O’Bryon (band leader/keyboards), G. Scott Lacy, Rick Ogden (guitar and reeds), Dave Rumley (percussion) and Oliver Shirley (bass) is intricately meshed into the show with O’Bryon stepping out occasionally to sing.

Catie Grady and Michael Louis Cusimano recreated “Falling Slowly” from their award nominated “Once”; Brian Barbarin was bigger than life in his rendition of “Hollow” from Lamb’s original “Oz” with music and lyrics by Jon Lorenz. He also brought the house down with his Louis Armstrong voice in “Well Hello Dolly”.
Deborah Smyth’s moving “Children Will Listen” from “Into The Woods” and “Divining Day” from “Light in the Piazza” and “Cluster of Crocus” from “Secret Garden” moved me to tears and Joy Yandell’s “I Dreamed a Dream” from ‘Le Miz’ was heartbreakingly beautiful.

Eileen Bowman’s “Adelaide’s Lament” from “Guys and Dolls”, Brian Mackey’s “Trouble” from “Music Man” and “Happiness” from “You’re A Good Man Charlie Brown”, to John Rosen’s “Get Me To The Church” from “My Fair Lady” and “Matchmaker” from “Fiddler” gave the production some levity. Everyone seemed eager to fill the cast’s pockets when “Tips” from the musical “Pump Boys and Dinettes” trio raced through the audience to collect cash for their school outreach program.
Big as a minute Cashae Monya belted out “Bless The Lord” from “Godspell” moving the rafters a tad with her splendid voice, and the entire ensemble was on hand to render a perfect pitch “Hallelujah Chorus” from “Joyful Noise” that, if I were a church going gal, I might have felt right at home.

Attention was also drawn to costume designer extraordinaire Jeanne Reith as members of the cast paraded on to the stage in some of her most elegant, including an Elvis Presley look with Fernando Vega’s rendition of “Songs Of The King” from “Joseph”.

Mention of course Nathan Peirson’s lighting, Patrick Duffy’s sound, Javier Velasco’s choreographer and our unsung hero/ stage manager Maria Mangiavellano keeping it all together and there you have it, ‘An Enchanting Evening’ hosted by Jim Chovik and Cynthia Gerber 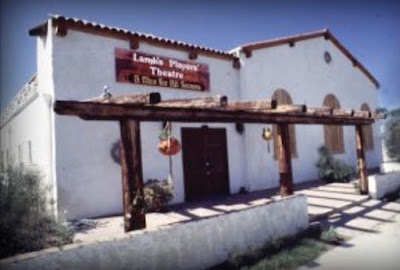 You’ve come a long way baby since moving into what is now being called “A Jewel In The Crown City” (of Coronado smack dab in the center of town on Orange Ave.) from your old digs in National City.

And yes, Chris O’Bryon did sing  “Some Enchanted Evening” that set the tone for yours truly.