“Becoming Dr. Ruth”: The Art of Reinventing One’s self.

For those of us over the age of say 50, I think we can agree to agree that most of us knew of Dr. Ruth Westheimer  (“Sex For Dummies”), famous TV personality in the 1980’s. We knew that she offered sex advise to millions of listener’s on her TV and radio shows, and that she was a pioneer breaking through barriers, giving answers to millions; straight forward answers,  about their sex woes.

We might have even seen her show or listened to some of her advice. And in our collective memories, she was a REALLY BIG Deal.

In person, she stood 4’7” and she spoke with a heavy German accent and had a perpetual smile on her face and a twinkle in her eyes.

But did you know that, as a child living in Germany during the Third Reich, she was shipped to Switzerland as part of the Kinder Transport Program when her parents were sent to the camps when she was only 10?

Or that she went to Israel (and lived on a kibbutz) because she was fed up with the way she was being treated in Switzerland? 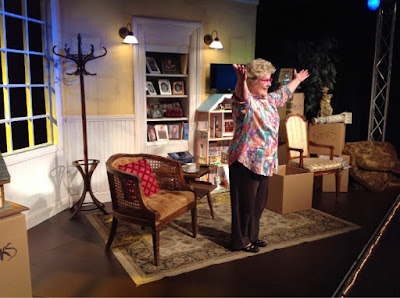 Or that that she was a sharp shooter in Israel’s Haganah (underground movement) in Jerusalem at age 17 during Israel’s fight for independence?

Or that that she was married three times and has two children and four grandchildren and still lives in New York?

Dramatist Mark St. Germain’s plays, “Freud’s Last Session”, “Dancing Lessons” (recently seen at in Broadway's Vista Theatre), “Camping With Henry and Tom”, were all presented in San Diego over the years for theatre goers know of his works. His style, that he refers to as historical fiction ‘brings life to historical events and personalities’.  Dr. Ruth happens to be one of those characters.

On several interviews with Dr. Ruth, who upon first being approached for this project refused unconditionally. At some point he finally made her comfortable enough for her to put her faith in him as a playwright and not to distort or sensationalize her life. 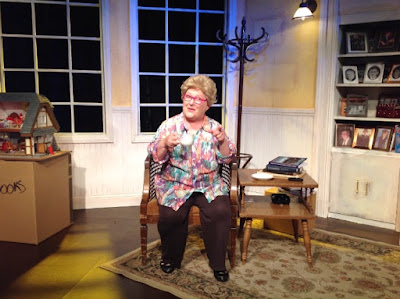 He penned “Becoming Dr. Ruth” in 2012 and now San Diegans have an opportunity to catch the San Diego premiere at Broadway Vista Theatre in Vista through Feb. 3rd.

Set in the backdrop of her comfortable apartment in New York, (where she immigrated as a single mother), now cluttered with moving boxes (designed by Randall Hickman) we are under the impression from phone calls from movers and with lots of newspapers for wrapping pictures and other valuables, that she is in the process of moving. 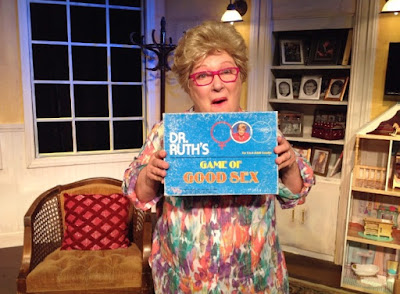 Short in stature with a twinkle in her eyes, Ms. LaValley aka Dr. Ruth, , walks through the small space, stopping every now and then to pull a family picture off a bookshelf (that is projected on to a TV in the room), sits in her easy chair or bench and tells us about her family, her children and her three husbands.

Or she might look out her living room window across the river where she can see the Statue of Liberty, treasuring those moments.

Or she may stop to regain her composure when talking about her father, who instilled in her her Jewish roots, (she now belongs to two Synagogues) her faithfulness to Judaism, and to her mother who always taught her to look on the sunny side of life.

LaValley, in an easy and pleasant manner, channels Dr. Ruth with an all-knowing smile, a hmm, a lifted eyebrow or a wag of her finger. Her performance is so natural that listening to her tell her stories makes you feel that you are sitting in her living room with her and that she is speaking directly to you.

Aside from telling us of the facts and fascinating life's experiences Dr. Ruth led, LaValley gives us an honest and heartfelt heartbeat of the one beating in the real Dr. Ruth Westheimer,   a mover and shaker in her own right and still going strong in that apartment she was going to leave but changed her mind in the end.

One -person plays are not always as easy as they look, but the one you will see in Vista is from a seasoned performer and done with love.
It’s worth the drive.

(“When it comes to sex, the most important six inches are the ones between the ears”)