It might just have been a coincidence that the late great Carol Channing left this world to forever be a ghostly vision at the Harmonia Gardens Restaurant in New York, on the same week the legendary (“Cats”) Betty Buckley arrived in town to play her illustrious role as Dolly Gallagher Levi in "Hello Dolly", but life has a way... 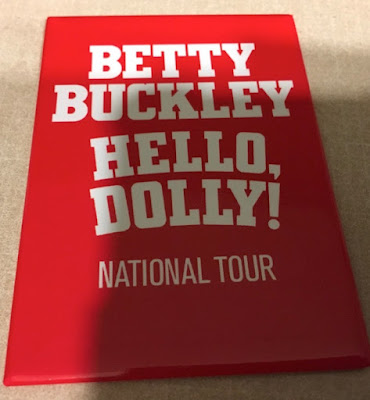 With Jerry Herman’s (music and lyrics) and Michael Stewart’s (libretto) musical, “Hello Dolly” is based on Thornton Wilders The Matchmaker”. If you were sitting next to my theatre date you would have heard him mouth all the lyrics and dialogue throughout the evening. Time has not erased the impact this musical has made in the minds of musical theatre lovers.

“Dolly opened on Broadway in 1964 to 4 rave reviews and two favorable. It didn’t have one pan. It won the New York Drama Critics Award, two Outer Critics Awards for Actor and Actress (1967-‘8), ten Tony Awards for Best Musical, Actress, Author, Producer, Director, Composer and Lyricist, Scenic Designer, Costumer Designer, Choreographer, Conductor and Musical Director. It played on Broadway for 2844 performances. At the time it was the longest playing Broadway musical and its star was Carol Channing.

In 1995 Ms. Channing arrived in San Diego as “Dolly” in what was then billed as the show’s 30th anniversary revival. To yours truly, it was one of the most memorable of times. Have I seen other productions since? Yes! Will I see others? Unequivocally yes!

But this time around the excitement belongs to Ms. Buckley, who at 70 something showed some restraint and reserve in her dance moves and vocal power but not in her willingness to convince herself, as Dolly Levi, matchmaker, dance instructor and anything else she can do to earn a living, that she and and the half- millionaire widower and grain merchant Horace Vandergelder (a truly convincing Lewis J. Stadlen) should tie the knot.

The story, convoluted as it is, revolves around “Dolly” and her attempts to snatch Vandergelder away from marrying the widow Irene Malloy (Analisa Leaming) the New York milliner.
The story takes place in the late 1800’s in Yonkers, N.Y. where wealthy grain merchant Horace Vandergelder (who describes himself as ‘rich, friendless and about as high as you can go in meanness), hires Dolly to whisk his niece, Ermengarde (Morgan Kirner) off to New York City to protect her from the attentions of Ambrose Kemper (Garett Hawe)) a starving artist and the young man she loves.

On her journey to New York she succeeds in matching up the widow with Cornelius Hackl (Nic Rouleau) Vandergelder’s clerk and his assistant Barnaby Tucker (Jess LeProtto) with Minnie Fay (Kristen Hahn) Mrs. Malloy’s assistant. While this sleight of hand and wonderfully funny hide and seek game plays out in Malloy’s store the audience is treated to “Ribbons Down My Back” and “Motherhood”.

Her strategy takes them from Yonkers, and Malloy’s to the streets of New York and finally to the Harmonia Gardens, an elegant restaurant where everyone from Rudolph (Wally Dunn) the mâitre’d to the bus boys who all know Dolly from years past, eagerly await her entrance. It’s here that the famous “Hello Dolly” is sung!

While all this is happening, some of the more familiar tunes, “It Takes A Woman”, “Put On Your Sunday Clothes”, “Before The Parade Passes By”, “Hello Dolly”, and “It Only Takes A Moment” reminds us of why we love this show and why it keeps coming back, and back and back and why Barbara Streisand, Pearl Bailey, Mary Martin, Bernadette Peters, Tovah Feldshu, Bette Midler and now Betty Buckley, along with a host of others on Broadway, regional and local theatre's who played Dolly, like Buckley, can’t resist the call when it comes.

Dolly Levi is a wonderful character molded in the true sense of a matchmaker and other talents, who sees things no one else sees and makes them happen.
She lives life to the fullest and while it “Takes a Moment” for her to get a sign from her late husband Ephraim Levi, who taught her to ‘send his money circulating among the people like rainwater’, she and Vandergelder make it to the alter and no doubt, lived happily ever after.

The musical “Hello Dolly” is a fun and good-humored show meant to entertain, and it does in spades and with  excellent support from a troupe of some of the finest dancers you will see (originally Gower Champion on tour Warren Carlyle) anywhere.  Jerry Zaks direction and larger than life sets, absolutely gorgeous costumes (Santo Loquasto) great sound (finally) Scott Lehrer, and lighting Natasha Katz) and Larry Hochman’s orchestrations makes this this  one show you won’t want to miss.