Going Crazy Over “Crazy For You” At SDMT

Wanna escape from all the BS that’s on TV, social media, Facebook and print media? Head yourself downtown to the Horton Grand Theatre, sit yourself down, plant your feet firmly on the floor and join in on choreographer Jill Gorrie smart and lively tap, waltz, follies, soft shoe and hoedown, salute to the Gershwin’s, Ira and George (“I’ve Got Rhythm”), in a newly dusted off “Crazy For You”, now playing through March 3rd.

With San Diego Musical Theatre’s bona fide conductor Don LeMaster and his seventeen- piece orchestra, in his balcony loft above the orchestra level, is in fine form to play the Gershwin’s eighteen familiar and not so familiar tunes right out of their 1993 Tony and Oliver Award winning show that ran for 1,622 performances.

There are over twenty performers singing and dancing their hearts and nimble feet off exuding more energy than I mustered in my lifetime, on the rather limited but accommodating space at the Horton Grand; but never mind.

Bobby Child, (Jeffrey Scott Parsons) dreams of being a dancer on Broadway. Instead he is a banker in New York per his mother’s (Katie Gucik) demands.

Bobby’s mother is so over bearing, and rich (she owns a theatre on Broadway) that when she sends him to Deadrock, Nevada, a deserted gold rush town, to foreclose on a sinking theatre he reluctantly jumps at the chance to get out of Dodge.

Now he has the chance to escape from his mother, his long time fiancée Irene (“Naughty Baby”) to whom he has been engaged five years, (Kelly Derouin -Inga of  “Young Frankenstein fame) and of his embarrassment for failing to impress another impresario, Bela Zangler (David McBean) of Zangler’s Follies.

Arriving in the sleepy town of Deadrock he learns the now defunct theatre is owned by,  “But Not For Me” and “Someone To Watch Over Me”, Polly Baker (Tyler Mettra), and her father Everett (Richard Van Slyke), who along with his late wife ran and performed in the theatre.

But more importantly when Bobby lays eyes on Polly (“Things Are Looking Up”), now the postmistress, it’s love at first sight. In contrast, Polly knows Bobby is in Deadrock to close the theatre and she does everything in her power to avoid and run the other way.

There is finally a meeting of the minds, in the town’s population of about 10 (“Bidin’ My Time”), to decide to put on a show to raise money, in the hopes that people will come from all over to see it and voila the theatre will be saved.

In another voice heard: Everett (Van Slyke) and Lank (Edward Chamberlain): “Invest in something. Start a --- casino.  All: Don't be stupid! Who would come to Nevada to gamble?”

Suffice it to say Gershwin’s music will always take top draw to Ludwig’s book, but between mistaken identities, a bit of slapstick, some amazing dancing (“I’ve Got Rhythm”) by the entire cast that includes some local favorites: Donnie Gersonde (“Young Frankenstein”), Jonathan Sangster (“White Christmas”), Luke H. Jacobs (“The Producers”) and of course David McBean, in faster than the eye can see costume changes, he assumes the roles of Bela Zangler with a thick Hungarian accent and Eugene a tourist guide checking out the territory, the production is propelled by the music and the dancing.

Dancing is key word here with one of the most skilled and versatile Jeffrey Scott Parsons as Bobby. Young, sharp and pleasing to the eye, Parsons and Mettra make the perfect –“Shall We Dance?” dancing partners (that is when they finally get together) and the world is their oyster. (“But Not For Me”, “Embraceable You”.)

Choreographer Jill Gorrie (“Damn Yankees”) and her talented dancing gals (“Nice Work If You Can Get It”), numbering about six, with another seven or so male dancers, and director Kristen Chandler, tap into some of the best talent for the 12th season opener of San Diego Musical Theatre.

Without further ado, I promise you will leave the theatre with a smile on your lips and an uplifting lilt in your step, even with Ken Ludwig’s off the wall and convoluted book based on the original 1930’s “Girl Crazy”.

NO! “They Can’t Take That Away From Me” 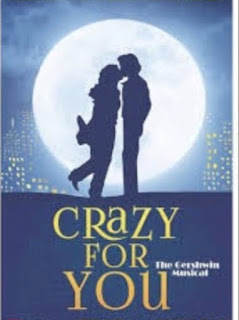