Frankie and Johnny, two lost souls on the highway of love find each other while working together in a small greasy spoon restaurant. She is a waitress and he is the short order cook. We come across them in her New York walk-up tenement in the West 50’s after a night of lovemaking that sounds like a volcano erupting.

Both satisfied that they had satiated each other and that ‘it was good for both of them’, she opts out for a meatloaf sandwich, offers him the same and then invites him to leave. She wants and needs her space back to watch TV, and anyway he could be a pervert.  He on the other hand stares in amazement and wonders out loud how he could be so lucky as to have finally met his soul mate, his Kismet.

WOA! Not so fast, cautions Frankie!

Like the push me pull you of Dr. Doolittle fame Frankie (Teri Brown,) and Johnny (Charles Peters) jab and poke at each other all night as they dance a familiar love dance. The lovemaking was great but it’s over and she wants him to leave. She only wanted a one-night stand. So long, bye, bye and toot sweet.

He on the other hand is convinced that there is more to them than that. He resists insisting it can only get better. “The night is young, the stars are clear, and if you care to go walking my dear.”

Life isn’t always that easy though, she retorts. Both have been hurt by their past lovers. Both are lonely. Each is afraid of being hurt again. Both are in their beyond thirty years of life and in a funny rat tat- tat rapid fire exchange they keep upping their age when the subject of it comes up. They ultimately settle on the truth of their ages much to their relief. 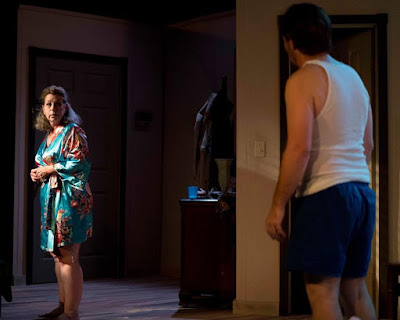 They inadvertently share their past track records, family dynamics (father/mother died/left when they were young, etc.,) and as fate would have it, there are more similarities than differences, if one can believe. (Boy, you really, really and truly don’t know about me. Just the last thing in the entire world I would joke about is a mother who wasn’t there.”)

Both are imperfect people, (and hey, aren’t we all?) no spring chickens, no false eyelashes, and cautious to the core. As they get deeper and deeper into exposing sides of themselves they barely want to remember it gets testy and somewhat philosophical;  “Pretend we’re the only people in the world”, Johnny insists.

As the night wears on, a give and take of the reasons of why he should go as opposed to why he should stay is interrupted with some light banter, some sex play. ‘I don’t think you realize how serious I am about wanting you to leave’ she drones on. They find themselves wandering into some uncomfortable territory, and the fear that the human connection that haunts, once again will disappoint. 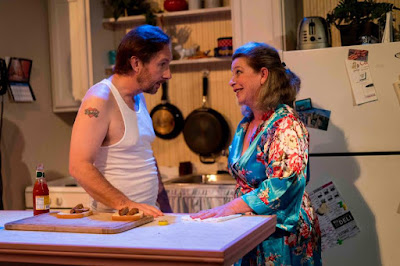 Terrence McNally’s “Frankie & Johnny in the Clair de Lune”, opened in 1987 at the Manhattan Theatre Club and has been making the rounds at smaller venues over the years. McNally has also written: “Corpus Christi”, “Love, Valour, Compassion”, “Master Class” and “Lips Together Teeth Apart” to name a few. “Frankie and Johnny” is the perfect play for the OnStage venue.

If there were two more perfect actors to fill the roles of Frankie and Johnny, I have not seen them in many, many years. The chemistry, the intimacy, the give and take, the ease with which each moves from bed to TV to kitchen, to the living room window (Duane McGregor) to see the full moon, and I might add, sometimes in the complete all together, or he in boxer shorts or she in a silky, mini wraparound, (Pam Stomploy- Ericson). All this aided by Chad Oakley’s delicate and soft lighting oft times obscuring their ages. 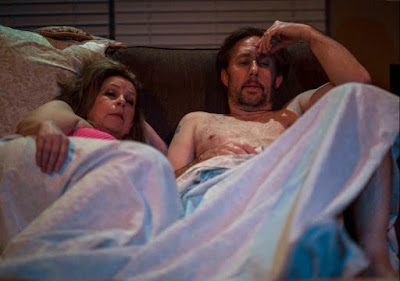 Director Jennifer Peters (Charles’s wife) directs with a deft and smart hand and it shows. In the limited, no small, no intimate space of OnStage Theatre where this heartbreaking story unfolds, through Feb. 23rd. you know that while the actors can actually hear the first row of audience members breathe, they only have eyes for each other. As mentioned earlier, the chemistry really shows through.

Teri Brown, artistic director now wearing her actor’s hat, is right on target as the once hopeful but now rejected actress turned waitress as she matches tit for tat his sarcasm, mockery. Her performance a convincing, take no prisoners Frankie. 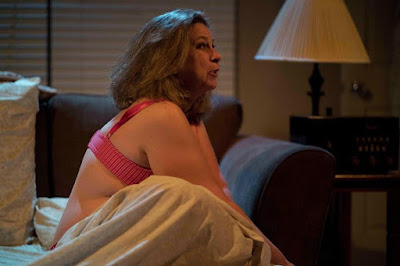 Peters is overly persistent and very persuasive as he tries to seize the moment with his optimism and uncanny up beat outlook while never missing a beat to sneak in a zinger, a kiss or a touch while she least expects it.

And in a nod to the title of the show, Johnny dials up a late night disc jockey who would still like to ‘believe in love’, by playing for lovers ‘the most beautiful music ever written’; Debussy’s “Clair de Lune”. It is a magical, bittersweet moment.

For all you romantics out there this is a lovely way to spend an evening. Leave the youngsters at home, though. There is some frontal nudity. 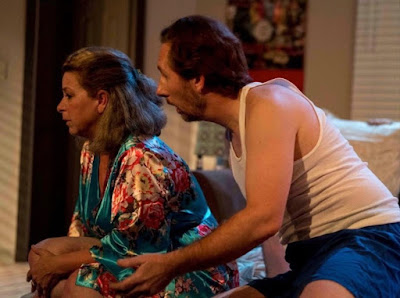