In a musical tribute to Leiber and Stoller that has been on the musical theatre circuit for years “Smokey Joe’s Café is now in a rousing and bouncy production at New Village Arts Theatre through March 17th.

It’s a wonderful celebration of their works, and a pretty lively one at that.  Since there is no story per se the music and dancing are non stop. The Tony Award winning (1995) show is held together solely by the the couple's musical versatility.

A splendid NVA ensemble made up of four women and five men all in great voices performing together and separately sing and dance about 38 + of the Leiber/Stoller repertoire both popular and not so popular.

Musical conductor and director Benjamin Goniea with his six-piece band along with director Tony Houck keep the music coming fast and furious. The band is on an elevated platform in the background  for all to see. Mostly made up of a younger generation it speaks to the universal language of music. 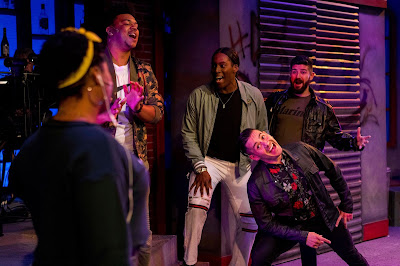 For those of you who think you might never have heard of the music of Jerry Leiber and Mike Stoller, you might recognize these: “Hound Dog? Oh, you thought Elvis write that one? Nope.  “Stand By Me”, or “There Goes My Baby”, or “Jailhouse Rock”, “Fools Fall in Love”, “Yakety Yak”,  “Kansas City”, “On Broadway”, “Charlie Brown”, “Love Potion #9”,  “Spanish Harlem”, (Leiber and Phil Spector) “Dance with Me”, “Buy Me A Ticket On The B&O” (been there done that) and I could go on and on.

Just as a sampler, Jasmine January and Philip David Black (“You’re The Boss”), Kyle Leatherbury, (“Spanish Harlem”) Kevin  Burroughs, (“I Who Have Nothing”), Natasha Baenisch, (“Falling”), Trevor Rex  (“Ruby Baby”) and Eboni Muse (“Hound Dog”, “Fools Fall in Love” “Hound Dog”), and Melissa Fernandes “I Keep Forgettin’” are but a few of the standouts.

Thirty-eight + in all are showcased in  “Smokey Joe’s Café”, but one of my all time high’s is a beautiful and seductive ballet number (choreographed by Michael Mizerany) to one of my all time favorite numbers “Spanish Harlem” sung by Kyle Leatherbury with Natasha Baenisch and Trevor Rex dance in stunning silhouette outlined in Chris Renda’s awesome lighting.

Overall, this is one show that crosses generational lines and will entertain for years to come. Oh by the way, Leiber & Stoller just happen to have been on the front lines of Rock ’N Roll during the 50’s and 60’s and their music is a direct reflection of that.

One thing about the musical revue “Smokey Joe’s Café”, there isn’t much NOT to like about it.