Emily Dickinson wore many titles, least of all ‘poet’ until her death in 1886. During her lifetime she penned 1800 poems of which 10 were published. She was often called a recluse and eccentric. She lived in isolation with her parents, her brother Austin, whom she adored and her sister Lavinia. She refused to answer the door when someone approached, instead looked out the window to see who was calling. She dressed in all white, and during her later years stayed pretty much alone in her room. While most of her communications were through letter writing, her wish was that they be burned after her death. 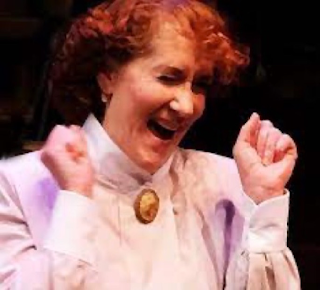 At one time Ms. Dickinson predicted she would be “The Belle of Amherst” (“I am growing handsome very fast indeed! I expect I shall be the belle of Amherst when I reach my 17th year. I don’t doubt that I will have crowds of admirers at that age” Emily Dickinson Museum*) even though she attended but only one dance and that was at her high school dance, where it seems, all her romantic inclinations were dashed when the young man she had eyes on, asked about her sister, Lavinia. But that didn’t mean that she wasn’t a romantic. Her poems and future meetings with men of interest in the literary world, tell us so.

Playwright William Luce's (“There is a mystical energy, an inner tone in her writings,” Mr. Luce wrote in the author’s note to “Belle,”) in “The Belle of Amherst” that debuted in 1976. (It became Julie Haris' signature role). The one woman show at Lamb's is just as moving, a little less somber, with Gerber in the role, as the one I watched on TV with Harris.) This one runs about 100 minutes and  captures the essence of Dickinson including several of her short poems and how her mind works in selecting a topic or words to express her ideas.

Lamb’s Players Theatre artistic director Robert Smyth chose this particular play with seasoned actor Cynthia Gerber to open their 75th season and celebrate the reopening of the theatre after an absence of almost two years as a result of the pandemic. A wise choice in both circumstances.

Ms. Gerber, who wanted to do this show over twenty years ago, is now up to the task for the role as a more mature and seasoned actor according to Smyth. She has the chops, the experience, the nuances and the credibility, agility and personality to portray Emily in every way beginning with her approaching the audience and offering them her favorite recipe for her chocolate cake.
A great ice breaker.

In that period of 100 minutes (without intermission), she flitts back and forth from one side of the stage to another, designed with Maple trees in full fall colors in the background to a sparsely designed interior by Mike Buckley. Buckley is also credited for the lighting design. Projections on a set of drapes in the background gave way to Michael McKeon’s projections of family members to particular words that interested Dickinson.  Jemima Dutra designed Ms. Gerber’s white outfit and Deborah Gilmour Smyth is credited for the sound design.

Gerber begins unraveling Dickinson's life, racing, in some instances, from one thought to another in no particular order. We do learn of her parents, her siblings, her nosey neighbors, her dear friends to little tid- bits of her community in Amherst, Mass where he father was a lawyer and served in Congress to her poems that really revealed her innermost thoughts.

If ever a role was custom made for a solo actor, Ms. Gerber embodies that role. She’s affable, joyous, oft times sad and morbid, yet reflective. In other words, she too is having a good time with Emily as was everyone in the audience the night I attended.

I give it a two -thumbs up!

“The Belle of Amherst” plays through November 14, 2021 at Lamb’s Players Theatre, 1142 Orange Ave. in Coronado. Masks and proof of vaccination required.