On the Road Again With Octavio Solis'“Mother Road”

When John Steinbeck’s “The Grapes of Wrath” was published in 1939 it won the National Book Award and Pulitzer Prize for fiction. He was awarded the Nobel Prize for fiction., it was that well regarded. In the book, later made into a movie, it chronicles American families fleeing the Dust Bowl (Oklahoma in particular) states and headed for California where jobs were waiting for them. It’s truly a saga set in the great depression following the Joads family, struggling migrant farmers and follows them across Oklahoma to California

Inspired by Steinbeck’s ‘Grapes’, Solis picks up, in a sense, where Steinbeck’s ‘Grapes’ leaves off only this time the characters, the ancestors of the Joad family, in particular William(Will) Joad (a venerable Mark Murphy) are on the road again, the Mother Road or Route 66 between Bakersfield, Ca. and Sallisaw, OK.  making the trip back. To say that along the way they were treated well or regarded with approval, would be a misnomer.

70 year old cantankerous William is dying of cancer. His last request is to meet and sign over his farm and land to the last heir and blood relative of the Joad clan. He is introduced to Martín Jodes (a handsomly perfect Richard Jessie Johnson) by Williams’ lawyer Roger (an always dependable Jason Heil.

Much to his chagrin William learns that Martín is of Mexican decent. Much to his relief he is an American citizen and migrant worker living in California. Not that he’s prejudice, he’s just a little kerfuffled that an ancestor of his could be Hispanic. 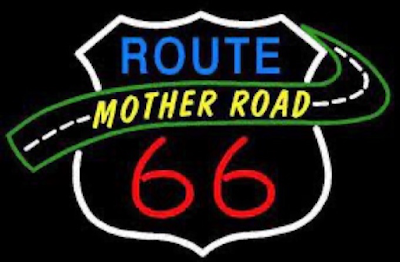 The long trip begins in Wills green Dodge pickup truck where on the way they add to their journey a menagerie of followers including a cross cultural makeup of everything and everyone indicative of what this country represents, the good, the bad and the ugly.

Along the way they pick up Mo a lesbian farm worker (Yadi Correa is pretty out there) who adds some much needed lightness and humor to the trek. She continues on the trip all the way with Martin and Will. James, (Cedric Lamar is outstanding and has been with the show from the beginning) an African American healer who saves Martín from a serious illness and gets him on the road to recovery. Others in the chorus include Javier Guerrero and Rubin Rubio. More homies hop on here and there and act as a Greek chorus of sorts filling in singing some of Solis’ music, reciting his poetry and telling stories. Others in the mix include Amelia (Celeste Lanuza) Martin’s lost heartthrob who keeps showing up looking rather celestial. They pledged themselves years ago.

Sandy Campbell plays several roles including a waitress in a diner stop Martin and William take for a quick bite. She’s chastised by William who doesn’t agree with her attitude about the migration:( “Well, as I was sayin, y’all sure got farther than we ever did. My grandpa’s car broke down not five hundred yards from where we’re talkin right now. So we settled here. Didn’t quite have the spirit of you Joads. “Mister, I don’t know what your problem is, but you don’t judge my folks for the choices they made. To you, we’re nothin but a rest-stop meal and a potty break. But I raised a family here, and I have friends here, and the love I put in this town has been returned a hundredfold! I like where I'm livin, Mr. Joad. We don’t need your damn Oklahoma. Put that on your tab and shove it up your tailpipe."

Jason Heil plays several characters but his main character is Roger, Williams’ lawyer and friend who finally shows his true colors when he thinks the farm should go to him. That’s another story and this is where Solis gets bogged down in the nitty gritty of too many stories that wander off, some connecting others not so much as the play comes full circle.

Artistic director Sam Woodhouse works miracles again. Long as the play is it he kept moving at an OK pace. Charles Murdock Lucas scenery flashed on a giant screen showing the vast landscape as they drove past on their journey east. Jennifer Brawn Giddings is back doing what she does best as well, building the costumes. Chris Rynne designed the lighting and original music and sound designer is by Paul James Pentergast and Cedric Lamar is credited as movement and music coordinator and flight director.

The entire cast along with Woodhouse deserves a two -thumbs up for consistency and endurance.  The play is well over two hours long. With some serious cutting and sticking to a more modern theme of healing the nation of its many stereotypes and letting the audience fill in with their own stories and drawing their own conclusions on how to reunite this country again, “Mother Road” would be more realistic if the audience concentrated on the heart of the story rather distracted by the side stories that were oft times difficult to place in the scheme of things.

It’s a good beginning, however for Solis and his “Mother Road”.