“Shutter Sisters” Opens Globe’s Theatre in The Round

Unlike the sisters in “Mineola Twins” by Paula Vogel recently seen at Moxie Theater,, “Shutter Sisters” by Mansa Ra now in a world premiere production in the Sheryl and Harvey White Theatre, Mykal (Terry Burrell and Michael (Shana Wride), there is no outward look-a-like resemblance to even suggest that the two have anything in common save they share the same name, different spelling.  No. Mykal (“my mom must have wanted a boy”) and Michael have something they share that siblings from the same family rarely think about: adoption.

OH, it’s coincidental that they both work at a Shirley Shutter Sore in Atlanta, selling shutters of all makes and brands, What else? The locations of their respective stores are on opposite ends of the city so in essence, they never met.

Mykal is black and Michael is white. Both have been divorced. One has a daughter, the other is childless both are in their fifties, both have been adopted and both have a story to tell

And tell their stories, they do, of their parallel lives in search of their identity.

Set in the round, each of the M’s tell their respective stories without ever looking at the other. Director Donya K. Washington has them talking to the audience most of the time.

Michael tells us she has two brothers. She did not know she was adopted but was aware that she didn’t look anything like her siblings or parents. Hers is a story of conflict and not feeling as if she belonged. Frustrated and lonely her mission was to find her birth mother and her place in her life after one of her brothers blurted out that she was adopted. This happened at their mother’s funeral. 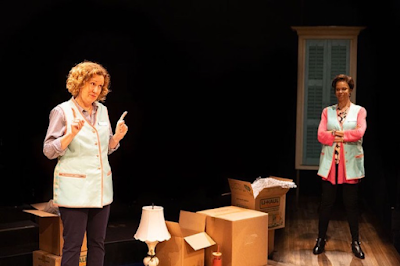 Mykal, on the other hand, grew up in a loving family. She succeeded in getting ahead in business and knew the ropes to fit in.  She was smart, aggressive and witty. Her biggest fault was in not seeing through the dangers of hooking up with the wrong guy (“He was trouble, but I didn’t mind a little trouble”) who ultimately left her on her own only to have her move back in with her mother. She overcompensated by spoiling her daughter to death only to be spurned by her.

Both M’s needed a connection.

In telling their stories Ra has framed a series of monologues designed to fit each personality and both actors embrace their stories with pathos, humor, sadness, pride, regrets and humbleness.  Both are excellent, but the simple truth is that Burrell has the lion’s share of the of the funny and clever lines and tells them with pizazz. Wride’s share of the stories are told in a self -questioning, sort of apprehsive but determined tone. 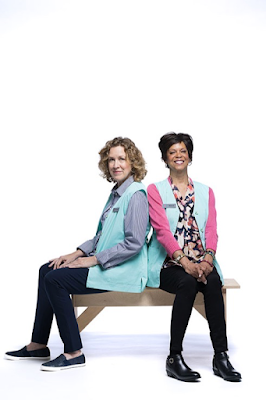 Wilson Chin’s set is filled with moving boxes of all sizes and shaped as if someone were moving in or out of someplace. Kara Harmon designed the Shirley Shutters aprons and Zach Murphy designed the effective lighting. Sound is always a challenge in the round. Inevitably someone’s back is facing you and mikes would be appropriate. That would be my suggestion. Sound designer Chris Lane is in charge so it is what it is.

Ra’s “Shutter Sisters” does give food for thought along the spectrum, adopted or not. There’s always that unanswered question of what helps determine who we become, Nature vs. Nurture. 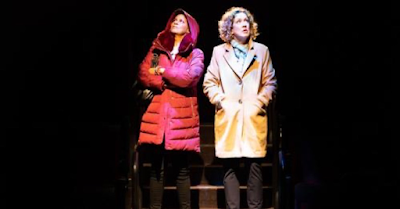 “Shutter Sisters” plays through November 7, 2021 at the Old Globe’s Sheryl and Harvey White Theatre. Shows Tuesday, Wednesday and Sunday nights at 7 p.m.; Thursday through Saturday at 8 p.m., Saturday and Sunday matinees at 2 pm.